New index finds 1 in 4 worshipers and 1 in 5 churches in Baptist World Alliance are very vulnerable to persecution and poverty.
Jeremy Weber|July 8, 2021 06:44 PM 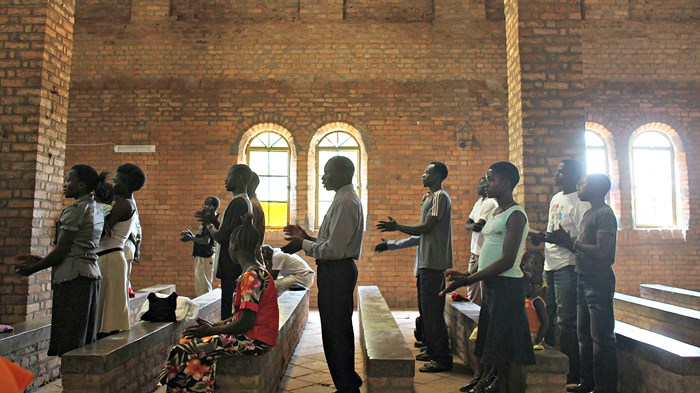 Image: Spencer Platt / Getty Images
A Sunday church service near the borders of South Sudan, DR Congo, and the Central African Republic. A study ranks all three among the nine nations where Baptists are most vulnerable.

As thousands of Baptists from almost 150 countries gather online this week to celebrate their global family, a recent study finds 36,000 Baptist churches and 13 million Baptists in nine countries face significant challenges related to their faith and their daily lives.

This represents 1 in 5 churches and 1 in 4 worshipers affiliated with the Baptist World Alliance (BWA), which has member bodies in 126 countries and territories.

Thus it was fitting that the 22nd Baptist World Congress, held every five years and originally scheduled for 2020 in Brazil, opened yesterday with a pre-conference focused on the persecuted church. The event was made all the more poignant by Monday’s mass kidnapping at a Baptist high school in Kaduna, Nigeria, where 121 students remain missing.

The inaugural Baptist Vulnerability Index is an effort by BWA leaders to “bring attention” to the “challenging realities” of its members and to help Baptists “stand together in intentional solidarity.” More than 4,000 people from 146 nations registered for the congress, the largest and most diverse attendance in the 115-year history of the gathering. (Billy Graham spoke at many.)

The report identifies the top nine countries where it is now hardest to be a Baptist:

All scored between 6 and 9 on the index’s 10-point scale [see chart below].

“Our concern is for the Baptists, but not only for the Baptists,” Elijah Brown, BWA general secretary and CEO, told CT. “We share concern for all of the citizens in the country who may be struggling.”

Then BWA regional leaders assess “the degree to which Baptists directly experience these challenges.”

Beyond its focus on Baptists, the report’s inclusion of hunger and livelihood challenges make its rankings stand out from the country rankings produced by longstanding assessments of Christian persecution, such as the Open Doors (OD) annual World Watch List, or of religious freedom violations in general, such as the Pew Research Center’s annual indexes of government restrictions and social hostilities.

André Simão, a senior fellow with 21Wilberforce and vice chair of BWA’s religious freedom commission, told CT this is due to “the BWA approach, which also encompasses aid (through BWAid), and because many of those problems may intersect and demand an integrated response.”

Only two of the countries on OD’s top 10 persecutors list—No. 9 Nigeria and No. 10 India—also appear on BWA’s list. The reason is simple, according to Simão: the BWA does not have any affiliates in the worst eight nations. Then, among OD’s fuller list of the top 50 countries where Christians face the most persecution, another five nations—No. 12 Syria, No. 13 Sudan, No. 35 CAR, No. 36 Ethiopia, and No. 40 DRC—also appear on the Baptist index.

Overall, BWA has affiliates in only 23 of the 50 countries on OD’s watch list. Chad and South Sudan appear on BWA’s list but not on OD’s list.

The United States resettled 34,580 Baptist refugees from 42 countries between 2002 and October 2020 (the US State Department removed such data from public view on October 9 last year).

Brown said the index is being used to focus Baptist advocacy at the UN and to encourage more direct aid and partnerships between member bodies. The BWA counts 241 member bodies in 126 countries, representing 47 million Baptists across 169,000 churches.

“Our concern is not just about protecting or strengthening the local Baptist community—though we are certainly working toward that end—but also recognizing that they are ministering in very vulnerable contexts and have a heart and passion for living out the gospel well in their community,” said Brown. “We also want to stand with them and help empower them as they engage in sharing the gospel, serving with compassion, and standing for justice.”