A monument to Marcus Whitman is being pulled from the US Capitol, and some students want a second removed from the college that bears his name.
Nicholas K. Geranios - Associated Press|June 3, 2021 06:00 AM 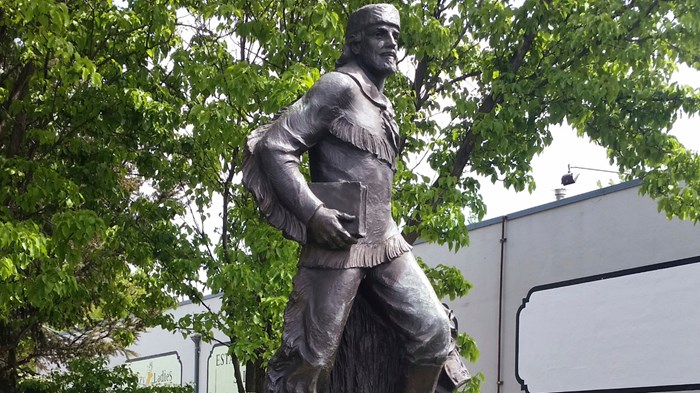 For generations Marcus Whitman has been widely viewed as an iconic figure from early Pacific Northwest history, a venerated Protestant missionary who was among 13 people killed by the Cayuse tribe near modern-day Walla Walla, Washington, in 1847.

But this past year has seen a continued reappraisal of Whitman, whose actions have increasingly been viewed as imperialistic and destructive.

The Washington Legislature voted to strip his likeness from the US Capitol. Students at Whitman College in Walla Walla demonstrated recently to demand another Whitman statue be removed from campus. A new book says a well-known story about Whitman’s efforts to save the Northwest from British rule was fabricated.

The developments come amid a nationwide movement, following George Floyd’s death last year, to shed Confederate monuments and depictions of historical figures who mistreated Native Americans. Statues of colonizers have been targeted in several states.

Marcus Whitman is known for leading a small group of missionaries in 1836 into what was then Oregon Country, a region about the size of Alaska. He established the Whitman Mission at Waiilatpu, near the Walla Walla River.

The mission was in the territory of the Cayuse Tribe, which was wary of the white settlers.

Whitman and his wife, Narcissa, were strict Calvinists who preached a demanding version of Christianity that proved unpopular with the tribe. In more than a decade of effort, they managed to convert only two members of the tribe, said Blaine Harden, an author and former New York Times and Washington Post reporter who wrote the newly published Murder at the Mission about the massacre.

“Whitman was a mediocre missionary,” Harden told The Associated Press.

But the mission became an important stop along the Oregon Trail from 1843 to 1847, and the Cayuse became suspicious that the white settlers were coming to take the land.After a few years, the Whitmans lost interest in the Cayuse and spent their time trying to convert white settlers. Whitman eventually decided the Native Americans needed to give way to the settlers.

An 1847 measles outbreak killed half the local Cayuse. The illness also broke out in the mission, but more white settlers survived. Some of the Cayuse blamed the devastation on Whitman and his wife. The Cayuse had a tradition of killing failed medicine men, Harden said, and Whitman, a medical doctor, was warned to leave the area. The Cayuse attacked the mission and killed the Whitmans and 11 others.

The deaths shocked the nation.

After the massacre, the settlers of the region sent a delegation to Washington, DC, and used the massacre to motivate Congress to make the Oregon Country an official part of the United States, completing the continental nation, Harden said.

Prior to that, the region that became the states of Oregon, Washington, and Idaho had been jointly held with the British, Harden said.

“The killing of Whitman was the trigger that made Walla Walla part of the United States,” he said.

There is no evidence Whitman actually did this, Harden said.

But Spalding relentlessly promoted that story, and it became the popularly accepted myth, Harden said, printed in history books for decades. The myth was debunked in 1900 by a Yale professor and dropped from wide use. 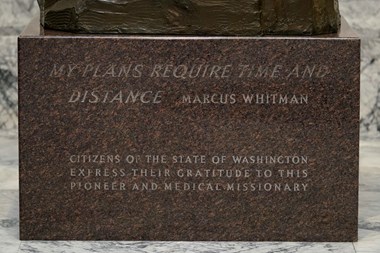 An engraving on the base of a statue of Marcus Whitman is shown in the Legislative Building at the Capitol in Olympia, Washington.

Whitman’s name still adorns landmarks across the Pacific Northwest, including many schools, streets, a hotel in Walla Walla, a county in eastern Washington, a national forest in Oregon, and a glacier on Mount Rainier.

In 1953 a heroic statue to Whitman was placed in Statuary Hall in Washington, DC, as one of two representing Washington state. He is standing, wearing buckskin garments and holding a thick Bible and saddlebags. Some people grumbled about the false story of Whitman’s achievements even then, Harden said.

Harden noted that Whitman College has taken concrete steps for decades to distance itself from the Whitman myth. That includes moving a statue identical to the one in Statuary Hall to a remote corner of campus. Last year, a proposal suggested moving the statue to the Fort Walla Walla Museum, where it could be presented in context.

The college in 2016 voted to change its mascot from the Missionaries to the Blues, in honor of a nearby mountain range. There are no plans to change the name of the elite college.

Washington legislators had been working for several years to replace Whitman’s statue in Statuary Hall. This year they chose deceased Native American fishing and environmental activist Billy Frank Jr. for the honor.

The measure’s prime sponsor, Democratic state Rep. Debra Lekanoff, is the only Native American in the Washington Legislature. Her strategy was to praise Frank without criticizing Whitman, to avoid antagonizing supporters of the missionary.

Gov. Jay Inslee in April signed the bill, beginning the process of putting a statue of Frank in the US Capitol.

“We expect to send our best from the state of Washington to be memorialized in the United States Capitol in Statuary Hall,” Inslee said at the bill signing ceremony. “We can’t send the Nisqually River or Mount Rainier, but we can send Billy Frank Jr.”

Meanwhile, Whitman students have been working to remove a Whitman statue from campus, including at an April demonstration.

Sophomore Gillian Brown told the school newspaper she was uncomfortable with the way the statue glorified Whitman’s legacy.

“Even when I first came to Whitman and they took us to the monument, I thought, ‘This guy is a colonizer. He’s not someone to be celebrated,’” Brown told the Whitman Wire.

The issue is still up in the air.

The campus statue is owned by the city of Walla Walla, college spokeswoman Gina Ohnstad said. The city is working on a process to allow residents to submit formal requests for the removal of public art.

An engraving on the base of a statue of Marcus Whitman is shown in the Legislative Building at the Capitol in Olympia, Washington.
expand