Inspired by Makoto Fujimura, an American evangelical partners with Lebanese art institute to equally dignify every death.
Jayson Casper|May 10, 2021 09:15 AM 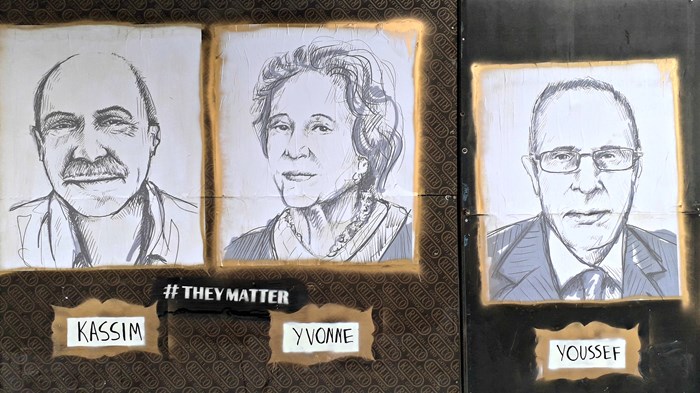 Last August, one of the largest non-nuclear explosions in human history leveled Lebanon’s main port and thousands of homes.

Charities and churches scrambled to help, as 204 people were killed.

The government has done next to nothing.

But now, each victim has a portrait across from Beirut’s famed Martyrs Square.

“Families were protesting, holding up pictures of their relatives as they demanded justice,” said Black.

“They wanted them to be seen. So we made it loud.”

An American street artist resident in Lebanon since 2015, Black teamed up with Art of Change to illegally create the capital city’s largest informal portrait gallery. Run by a secular British artist and a Lebanese Muslim from the heterodox Druze sect, the art institute co-founders sponsored Black’s evangelical idea for “good mischief.”

Scouring the internet for every name and image that could be found, Black digitally drew each face with the utmost care—with one caveat. No matter the importance of the victim or the degree of fame achieved in their death, each was limited to one hour of his creativity.

An hour he bathed in prayer for the surviving family.

“People come up to me, frantically asking, ‘Where is my son?’” said Black of his installation. 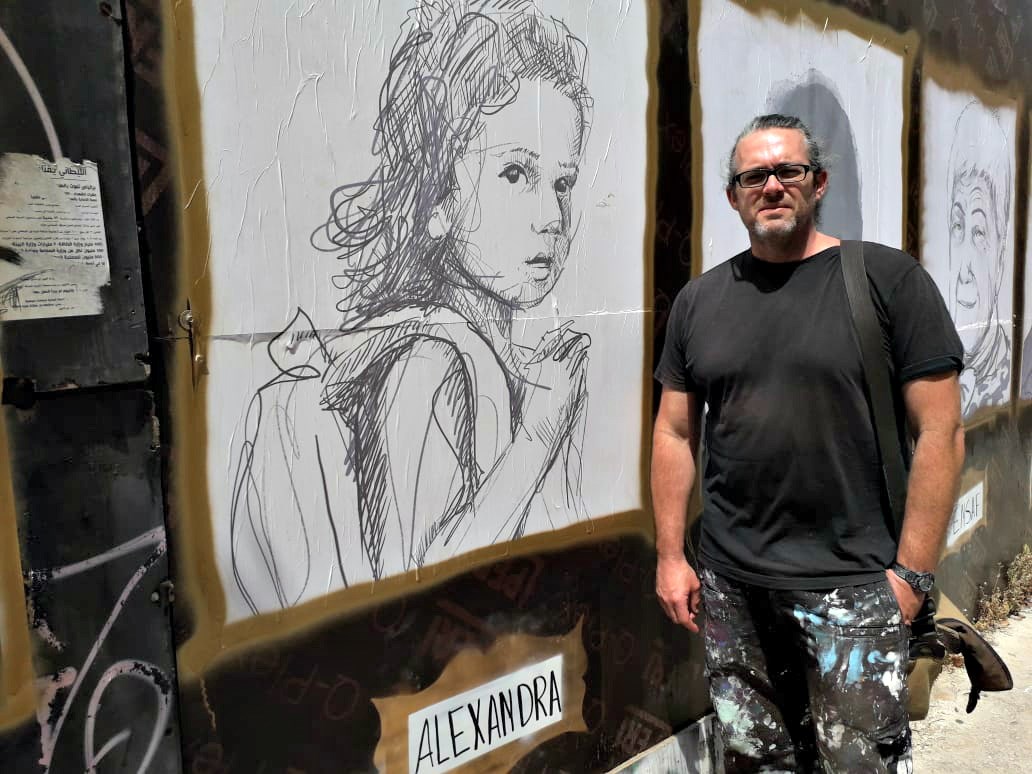 Brady Black stands in front of his #TheyMatter street art gallery in Beirut.

Each victim’s portrait is about 10 square feet in size. Arranged side-by-side, the images span the equivalent of three football fields, covering three-quarters of a city block on one of Beirut’s busiest downtown intersections.

Black was especially keen on the eyes.

Mona Lisa-like, each face stares directly ahead. Standing in front of one, viewers are confronted with the victim’s singular humanity. But when viewers turn their heads 90 degrees, the sidewalk gallery is designed to overwhelm with the scope of collective tragedy.

But also its equality.

Entitled #TheyMatter, all are listed only by first name.

Yvonne Sursock is perhaps the most famous victim of the blast. Known as Lady Cochrane, the 98-year-old high-society philanthropist and elegant patron of the arts was posthumously honored with Lebanon’s Order of the Cedar.

Black put her between Kassim and Youssef, unknown to all but their families.

Lebanese victims are interspersed with Syrians, Palestinians, Bangladeshis, Filipinos, and Ethiopians. Others are in silhouette, if images were unavailable or families did not want to participate. But with portraits drawn in black and white, ethnic differences are dimmed, challenging an often-stratified social hierarchy.

“It is extremely non-Lebanese, but part of the message,” said Black.

“All are exactly the same in death.”

The project began as one family insisted that all be the same in memory.

An early idea was to highlight 3-year-old Alexandra Najjar, whose innocence transfixed the public after the explosion. But her family refused, said Imane Assaf, the Druze collaborator.

“It will hurt too much to see her image alone,” she recalled the father saying.

“If you want to honor her, honor them all.” 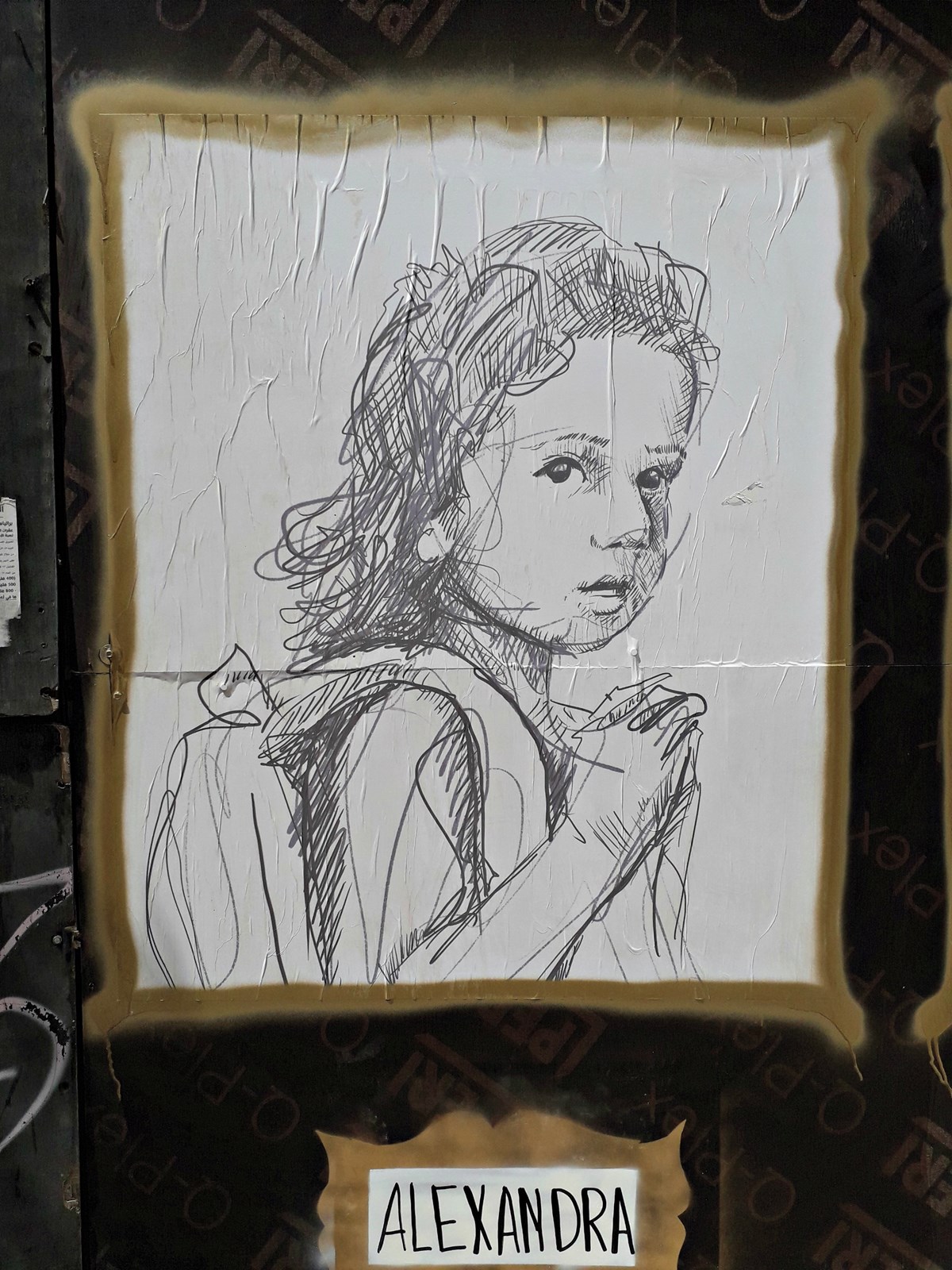 Sahar, a vibrant bride-to-be, was a paramedic first responder.

Chadi, an unemployed man who was unable to speak, hung around the nearby hospital.

Ali and Malak, a married couple out having dinner, had their portraits moved next to each other once Black discovered their relation.

The dignity of each is conveyed, however, through materials meant to symbolize utter brokenness. Cheap glue plasters the portraits onto construction boards, hiding one of Beirut’s stalled development projects.

Sahar, one of the most beautiful young women in the series, had her portrait land on a broken board. A tear now rips right under her nose. Black felt terrible, but he let the randomness stay.

This also is part of the message—including his own. 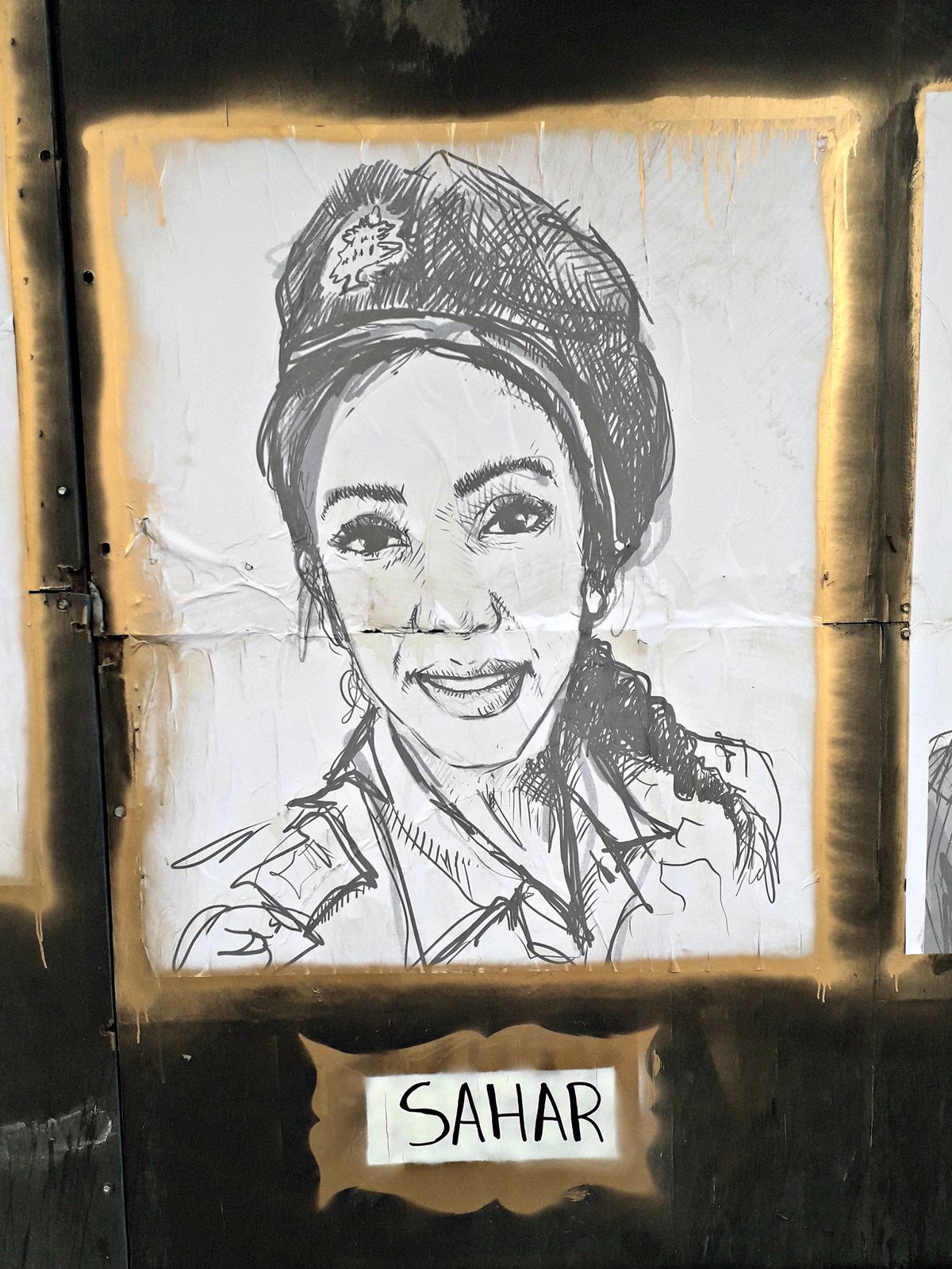 The 43-year-old Texan originally came to Lebanon to assist with Home of Hope, an evangelical ministry working with abused street children. He opened a school, won legal custody of a now 18-year-old boy, and dedicated himself to loving each one.

Six years later, it put him in therapy.

Akram, his son, has no legal existence. Abandoned by his birth parents, he lacks the necessary documents to facilitate official adoption. Black said he has spent years battling a Lebanese judicial system that could easily solve the problem by issuing a piece of paper.

In October 2019, he joined an uprising with hundreds of thousands of Lebanese similarly frustrated by their sectarian government. It was there he discovered the power of street art—and a new ministry.

“I avoided art my whole life, trying to be a good Christian,” said Black.

“But I pretty much sucked at everything, until this.”

Discovering the example of Makoto Fujimura, Black bordered each portrait with gold paint. It was a deliberate imitation of the Japanese style of Kintsugi, in which broken pottery is re-formed using precious metals.

“The American idea is to fix things,” he said. “But here, that which is broken is made whole through contemplation, and then enriched in transformation.”

Art of Change has similar hopes.

Assaf said its mission through art is to help Lebanese “see” a different future, and then to open doors so that others can make it happen. She and Jason Camp, the British managing director, served as Black’s mentors. The pair encourage him in his efforts, delighted to see a committed Christian in the art scene.

Everyone has a right to bring their message to the streets.

“It was his connection with God that fulfilled this project,” said Assaf, a 56-year-old mother of three who spent every day on the streets during the uprising.

“Faith is what we do on the ground.” 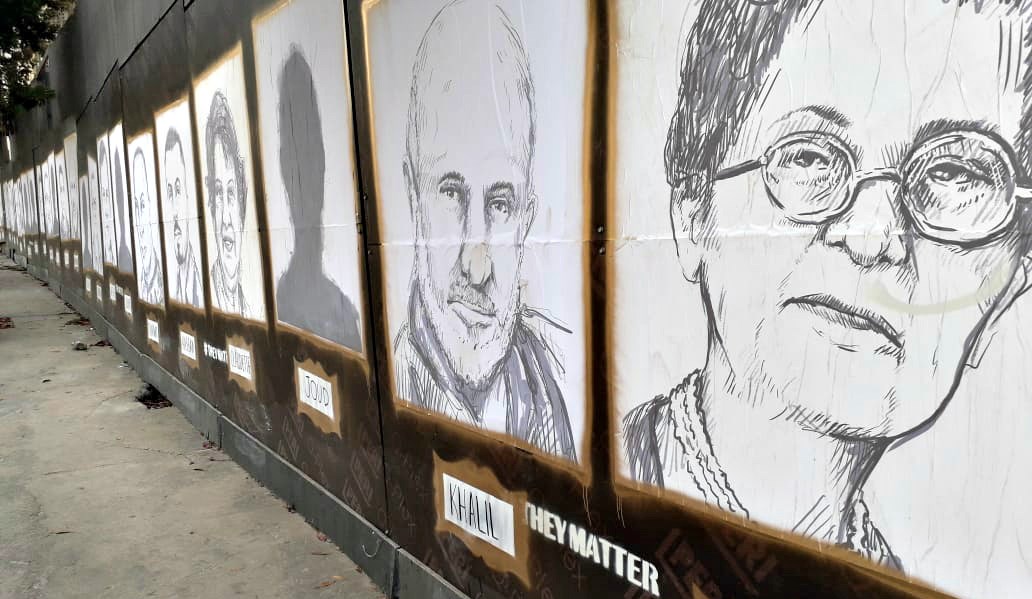 Many of Lebanon’s activist youth, however, have given up on God altogether. Angry at how religion is manipulated by politicians in a corrupt government, many desire a secular state.

They nevertheless pray when they are troubled or fearful.

“Many are confused,” she said.

“They are not so much anti-God, as anti- a political system tied to religion.”

And Black is winning their respect, by offering dignity.

Prior to the gallery wall of explosion victims, he was active drawing portraits of beggars and street children, placing his artwork at the very spot they occupied. Another series quoted the exasperated cries of revolutionaries. And a third put phrases from the Bible juxtaposed with socially conscious pictures of poverty.

He also digs through the garbage with abandoned children, pointing out material they can use as he trains them to be creative alongside him.

“I’ve talked more about Jesus [while] doing illegal street art,” Black said, “than I ever did being an evangelical church guy.”

When he put out the call for volunteers to help glue the images, he warned them there was risk involved. But he also assembled community leaders—and especially older women—who could placate the army and police.

This was especially important, as the project is meant, Black said, “to poke a finger in the eye of the government.”

Lebanon’s prime minister and cabinet resigned six days after the explosion. But they still serve in a caretaker capacity, as politicians have been unable to form a new ruling coalition.

A law was passed authorizing compensation to the families of victims, but as of April, only 14 had begun receiving the monthly aid. And some had their checks refused by banks, as the economic collapse has paralyzed the financial sector.

Meanwhile, a new investigating judge was appointed in February, after his predecessor leveled charges against the caretaker prime minister. Of the 25 officials initially detained—no senior politicians among them—6 have since been released.

Black is not sure what will happen to him due to his “offensively large” tribute, but he is willing to accept the consequences.

“Our role as Christians is to stand up for the least of these, and love them in an irrational way,” he said.

“Just as Jesus did for me.”