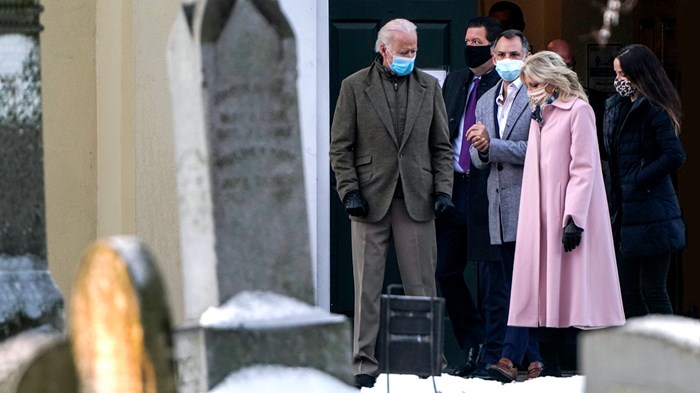 Joe and Jill Biden gave $1,000 to St. Joseph on the Brandywine Catholic Church last year, the Greenville, Delaware, congregation where the president regularly receives Communion and visits the graves of his first wife and two of his children. The Bidens gave another $1,500 to the First Lady’s church, Westminster Presbyterian, a Presbyterian Church (USA) congregation in nearby Wilmington.

According to the First Family’s tax records, released by the White House on Monday, the Bidens also gave to a church in South Carolina, a food bank, a fire department, a firefighter association, two Catholic charities that help the poor, a nonprofit that serves military families, and the Beau Biden Foundation for the Protection of Children, started after the president’s eldest son died in 2015.

That percentage is fairly standard for American families. Only about half of Americans give to charity at all, according to the most recent study from the Lilly Family School of Philanthropy at Indiana University–Purdue University Indianapolis. Among those who give to charity, only about 5 percent tithe one-tenth of their income.

Most give between 2.4 and 6 percent, according to the National Center for Charitable Statistics. People who make between $250,000 and $1 million give, on average, about half of what the Bidens did in 2020.

Barack Obama gave away a similar percentage of income his first year in the White House. His charitable contributions rose over the next eight years, however, and he ultimately gave away $1 million while in office—slightly more than 10 percent of what he earned from his presidential salary and sales of his two autobiographies.

George W. Bush was more charitable than Biden, giving away 10 percent of his income his first year in office. Bush’s giving averaged about 9 percent of the family’s income until 2007, when it increased to 17 percent.

Comparison to Donald Trump is more difficult, since the former president did not release financial information while in office. Trump frequently boasted about his giving, but reporting from The Washington Post shows many of his gifts were in the form of free rounds of golf at his resorts. The New York Times, reporting on leaked tax documents from 2016 and 2017, found that Trump’s most substantial charitable giving was a conservation easement—an agreement not to develop a 200-acre estate an hour outside New York City. Trump apparently gave little to no actual money to charity, though he did donate some of his presidential salary to government agencies.

Presidents have released financial records since Richard Nixon gave his famous “Checkers Speech” in 1956. The Republican vice presidential candidate, Nixon was accused of having a secret second salary, funded by rich California businessmen. He had an accounting firm release his financial information to the press and gave a speech detailing his family’s economic situation, including the mortgage on his home, the cost of his wife’s coat, and one gift he had accepted from a supporter—the family dog, Checkers.

Nixon did not mention any charitable giving.

From Nixon until Trump, presidential candidates and presidents released their financial information in an attempt to show the American people they are free from any financial corruption. The information also shows how much they give away, and whom they give it to.

The Bidens’ largest gift was $10,000 to the Beau Biden Foundation. They also gave $2,250 to the Ministry of Caring, a shelter for abused spouses founded by a Franciscan friar. Joe Biden’s sister Valerie Owens worked with the organization for more than 35 years and served for a time on the board of directors.

The Bidens gave $1,000 to a third church that neither of them attend regularly: Morris Brown African Methodist Episcopal Church, in Charleston, South Carolina. Morris Brown is the historic Black church where Biden went during the Democratic primary campaign to apologize for his cooperation with segregationists during his time in the US Senate.

Biden’s campaign focused on Black churches in the state, and he won the pivotal South Carolina primary by nearly 30 points.