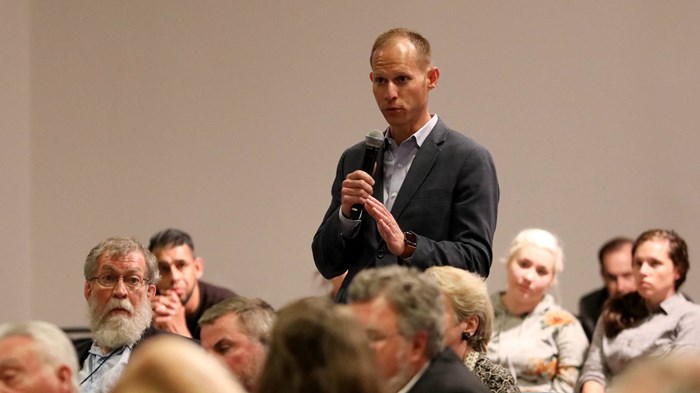 It took three weeks of scheduled meetings, at least three law firms, dozens of statements, hours of closed-door briefings, and extensive back-and-forth debates across boardrooms, social media, and Zoom calls for the Southern Baptist Convention’s Executive Committee (EC) to agree to the terms of a third-party investigation into its response to abuse. But on Tuesday, it did.

The EC voted 44–31 in favor of waiving attorney-client privilege in the investigation, after a half dozen members resigned and several switched their position in favor of the waiver. For a moment, it felt like the conclusion of a long and heated process, though the decision is only the start of a long investigative process.

EC chairman Rolland Slade, who oversaw the proceedings, expressed his relief after the tally was announced. Then he remarked, “I want to express sorrow over the conduct we have displayed as Southern Baptists.”

For the EC—the denominational body tasked with Southern Baptist business outside the annual meeting—the debate pitted the desire to open fully to the investigation against concerns that such transparency would threaten its financial solvency, insurance coverage, and other fiduciary duties to protect the entity.

As the clash played out, Southern Baptist voices including seminary presidents, state convention leaders, and thousands of pastors spoke out to put pressure on the EC to comply with the requirement to waive attorney-client privilege, which had been approved when the denomination called for the investigation at its annual meeting in June.

“Taking steps towards honesty, transparency, repentance, those are great things. Those are worthy of celebration,” said Georgia pastor Griffin Gulledge, who hosted hundreds of SBC leaders and onlookers in Twitter discussions around the EC proceedings.

The recent vote authorizes a contract with Guidepost Solutions, an independent firm tasked with reviewing how EC staff and members responded to abuse allegations and victims over a 20-year span. Guidepost is slated to make its report public prior to the annual meeting in June 2022.

“It’s a baby step. There’s a long road ahead,” said Jules Woodson, who shared her story of clergy sexual abuse in the start of the #MeToo era and has rallied groups of SBC survivors. “I’m so glad people are finally paying attention. Nobody has listened for years.”

But survivors like Woodson also see how much work it took for the EC to agree to the terms of the investigation and worry the SBC is still divided over its responsibility to respond to the abused and vulnerable.

The motion to comply with the Guidepost investigation, which is being overseen by a sexual abuse task force appointed by SBC president Ed Litton, came from Texas pastor and EC member Jared Wellman, who has led the charge for the EC to open up and adopt the terms set by the messengers.

“The messengers have spoken very clearly that this is what they want, and we’ve exhausted every avenue trying not to do this,” said Wellman, whose motions failed in two previous meetings.

Outspoken Southern Baptist leaders believed that the EC’s refusal to comply with the terms of the investigation could disrupt denominational polity, where messengers at the annual meeting direct the actions of the committee, rather than it holding top-down governance.

Sarah E. Merkle, an attorney and professional parliamentarian, said the EC’s discussion over how or whether to follow the messengers’ directive offers a lesson for organizations in how “governing documents and motions matter.”

“An Executive Committee vote contrary to the will of the Messengers would have been a drastic reversal of the longstanding position that local churches and their messengers control the SBC, and that the Executive Committee’s powers are limited,” said Merkle, who serves as an advisor with CT’s ChurchLawAndTax.com. “Today’s vote communicates that a majority of the Executive Committee is willing to follow the established governance structure even when doing so may come at a cost.”

Opponents to waiving attorney-client privilege repeated their concerns in Tuesday’s gathering, which was held over Zoom. Joe Knott, EC member and former EC secretary, suggested the decision would “create chaos” rather than following God-given law and order. Mark Elliott said he’d be forced to resign if the EC waived privilege, since it’d be “the opposite of what our attorneys advised us to do.”

At Tuesday’s meeting, the EC brought in insurance recovery attorney Jim Murray of Blank Rome LLP to discuss possible insurance ramifications to waiving privilege in executive session. The EC also hired a pair of Dallas attorneys from Locke Lord, which came on in addition to the EC’s counsel.

Much of the previous debate had focused on finding a compromise option that would allow the EC to reduce liability and maintain some oversight while the investigation moved forward. But as EC member Dave Bryan stated, there wasn’t a good third option to be found.

“It’s hard to make a right decision when you don’t feel like you have good options,” the Oklahoma pastor told the group, announcing that he had switched to support the waiver. “As 1 Peter says, if we’re going to suffer, let’s suffer for doing the right thing.”

Both victims and advocates see the move to waive privilege as promising but also only a small step, especially as the SBC’s divides over the investigation and the denomination’s role in responding to abuse are put on full display. The investigation will require participation from current and former EC members and staff as well as victims in order to generate a substantial report.

EC president Ronnie Floyd, who had opposed the waiver of privilege, said in a statement, “I appreciate the statement of our Chairman Rolland Slade at the end of the meeting including his call to come together now to serve Southern Baptists. Now that the Executive Committee’s Board of Trustees have made their decision, the leadership and staff of the Executive Committee will provide support to Guidepost on implementing next steps to facilitate their investigation. We thank all of the Trustees for their diligence in addressing complex questions brought to bear by this process.”

Task force chairman Bruce Frank said, “the task force is pleased with the strong vote today by the Executive Committee to abide by the moral imperative as directed by the messengers, seminary presidents, state leaders, and many, many more” and that Guidepost will begin its work immediately. (In a previous vote, the EC had authorized the funding for the inquiry.)

Both sides in the debate over privilege claimed to have legal backing for their positions. Some EC members said they feared, based on their own expertise or legal counsel, that waiving privilege for the investigation could increase the EC’s liability and put the entity at risk; the sexual abuse task force’s attorneys said that declining to waive privilege could actually increase individual liability.

The privileged information sought for the investigation is limited to EC decisions related to abuse and victims during the 2000-2021 time period.

“Decisions like this one aren’t uncommon,” said Adam Plant, a Birmingham attorney who was not involved in the EC process but has represented clients in cases involving outside investigations. “Limited-scope privilege waivers can ensure individual wrongdoers are held responsible for their own misconduct, rather than the corporate entity being prosecuted for the misconduct of individual bad actors.”

The investigation follows years of concerns over the Southern Baptist Convention’s response to abuse brought up by victims, the media, and leaders within the denomination. The EC became the subject of the investigation following documents leaked earlier this year that suggested that its leaders downplayed abuse response efforts and intimidated victims.

Litton, who beat out former EC chairman Mike Stone to become president of the SBC, said he was grateful that a “full, transparent, and unimpeded investigation” could now begin.

He prayed to conclude Tuesday’s meeting. “We have all faced a very difficult and challenging time. May it not continue to divide and separate brothers and sisters,” he said. “We pray for your will to do be done, what needs to be exposed exposed, and healing begin for many.”