More leaders and state conventions are putting pressure on the Executive Committee ahead of this week’s meeting.
Rob Collingsworth|October 4, 2021 09:38 AM 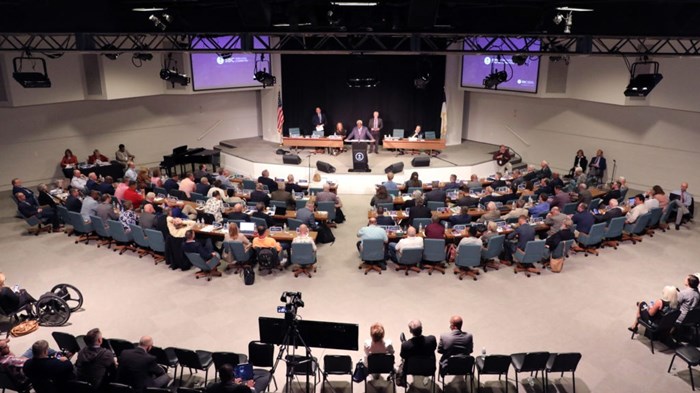 As controversy escalates surrounding an investigation into mishandlings of sexual abuse by the Southern Baptist Convention’s Executive Committee (EC), pastors and state conventions are calling on the committee to finally vote to waive attorney-client privilege at its upcoming meeting.

In official statements and social media threads, Southern Baptists condemned trustees’ failure to heed the directive of the messengers in the EC’s two previous meetings, and many threatened to withdraw giving or redirect monies.

David Sons, one of the trustees who signed the statement, told CT that it was born out of a concern for the “egregious nature of the accusations” and worries that Southern Baptist polity is being violated.

“The EC has a responsibility to carry out, to the best of our ability, the will of the messengers,” Sons said. “Not to tell the messengers why we can’t, or won’t, comply.”

Withholding or reallocating funds “shouldn’t be used as a threat,” he added, “but [it] can be done as a last resort to express to an entity that they have violated the trust of the messengers.”

In June, 15,000 convention messengers overwhelmingly approved a motion to launch the investigation, conducted by a third-party and overseen by a task force appointed by the new SBC president. The motion instructed the EC to abide by the investigator’s best practices, including waiving attorney-client privilege—which so far, the group has refused to do, citing fiduciary commitments and fear of legal liability.

The EC is scheduled to meet on Tuesday for the third time in as many weeks. As of Sunday night, over 25 statements had been released on behalf of state conventions, local associations, or groups of concerned pastors, though not all of them directly threatened withholding or reallocating money.

Louisiana pastor Jay Adkins wrote a blog post last week detailing how pastors can allocate funds so that they continue to support Southern Baptist causes without giving to the Executive Committee.

“I was concerned about my pastor friends who were talking about leaving the convention altogether or escrowing funds,” Adkins said. “I’m not suggesting people give away from the EC, although I’m for that. I’m just saying please don’t leave.”

Adam Blosser is the pastor of Goshen Baptist Church in Virginia, which forwards 10 percent of its undesignated giving to the SBC’s denominational funding mechanism known as the Cooperative Program. Blosser told CT he is concerned about the Executive Committee’s actions and is watching the situation closely.

“We aren’t ruling out the possibility of making a change in the future, but at this time we intend to continue giving as we have been doing,” he said.

At the heart of the crisis is the question of how Southern Baptists will respond to sexual abuse. There are also concerns about safeguarding the convention’s polity—wherein churches make decisions on behalf of the convention rather than central leadership—and whether waiving privilege would expose the Executive Committee to liability or void their insurance.

Scott Colter, a leader with the Conservative Baptist Network, recently wrote the EC to praise the body for so far refusing to waive privilege and not putting the entity at risk. He described his position in contrast to the “rising pressure of the mob-mentality” and those who say “you must either choose to follow Jesus or follow lawyers.” (Colter worked for years alongside Paige Patterson, the SBC leader who was fired and remains under litigation for his handling of abuse cases at Southwestern Seminary.)

Much of the pressure on the Executive Committee is from pastors concerned that the entity’s reluctance to waive privilege upends the convention’s bottom-up structure.

“Southern Baptists are no strangers to denominational crisis, but this one represents a perfect storm because of the intersection of power dynamics, polity concerns, and pleas for justice to be done,” said Southern Baptist historian Nathan Finn. “If the EC remains recalcitrant, it is almost certain that hundreds and maybe thousands of churches will direct their giving around the EC.”

Executive Committee chairman Rolland Slade, who has twice voted in favor of waiving privilege, told CT that he shares those polity concerns.

“The messengers made clear in June what they wanted us to do,” Slade said. “To me, that’s what we have to do, the way I understand Southern Baptist polity. We are bottom-up, and the messengers spoke clearly.”

Slade also told CT that three EC trustees have resigned in the past week and that he is expecting more resignations before tomorrow’s vote.

One Executive Committee trustee told CT that he planned to call for a vote of no confidence in CEO Ronnie Floyd and Vice President Greg Addison at last week’s meeting and that he shared his intent with Floyd, who requested he not do so. The trustee said that Floyd and Addison “had not led or supported the efforts of this trustee body to abide by the will of the messengers of our convention” and that their removal would be the best thing for the convention’s ability to move forward.

Based on the events of the last week and the grassroots uprising from Southern Baptists, however, he expects the board to waive privilege tomorrow and is no longer planning to move forward with the no-confidence vote.

Executive Committee lawyers have continued to balk at a blanket waiver of privilege, instead offering solutions that fall short of what the messengers mandated in June. Among these options is the “Michigan Model,” in which a law firm serves as an intermediary between the task force and Executive Committee but privilege is not waived.

“Southern Baptists of all stripes have spoken resoundingly that when it comes to the sexual abuse investigation of our Executive Committee, we will not settle for an agreement unless it includes the EC waiving their attorney-client privilege” said Tennessee pastor Grant Gaines, who offered the motion that instigated the investigation.

“We don’t want the ‘Michigan Model.’ We insist on the ‘Messenger Model’—the one approved by an overwhelming majority of thousands of SBC messengers at our annual meeting this past June.”