In the breadbasket of Europe, ministries bring loaves for hungry bodies and spiritual nourishment for the soul.
Rachel Pfeiffer|April 4, 2022 06:00 AM 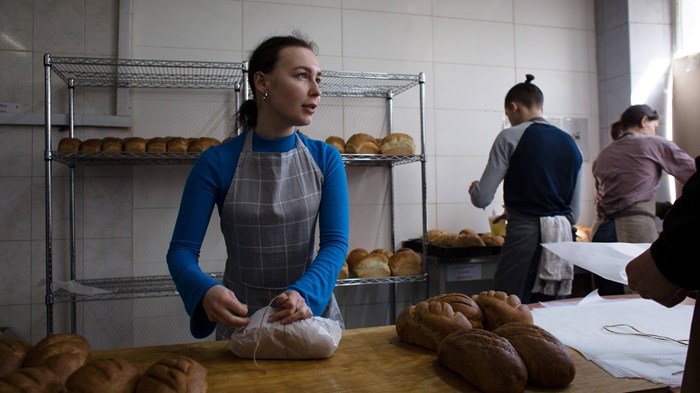 Image: Anastasia Vlasova/Getty Images
The Good Bread from the Good People bakery in Kyiv, Ukraine, reopened in March to make bread to distribute for free.

For Ukraine, Europe, bread is a way of life. Ukraine’s flag—now displayed around the world in solidarity—proclaims the nation’s agricultural heritage, with the yellow representing wheat fields and the blue representing the sky above.

“Bread is very important in our culture, but Jesus has said that we do not live by bread alone,” said pastor Fedir Raychynets, the head of the theology department at Ukrainian Evangelical Theological Seminary (UETS). “There is something invisible, something intangible, something that is beyond just physical bread.”

Inspired by the line in Isaiah 58:7 about sharing bread with the hungry and housing the poor, BREADtrust is one of several ministries helping get loaves into the hands of Ukrainians.

The UK-based charity funds local pastors who have remained in the country to continue to serve. They’re able to purchase bread, other food, and supplies for neighbors in need.

“There are those that feel deeply committed and called to where they are,” said BREADtrust project coordinator Phil Downward. One pastor and his family stayed until their apartment building was bombed and they had no choice but to leave. “That takes a level of faithfulness and courage that is utterly remarkable.”

Some ministries continue to bake the bread they distribute. In the days after the war broke out, a Dutch outreach through Oekraïne Zending, located outside Kyiv in Brovary, wanted to rally enough bakers to continue baking bread 24/7. They pass out loaves to hospitals and the army, along with notes containing Bible verses. (When Russia took over Crimea several years ago, CT highlighted the Bread of Life ministry in Maryinka, a bakery that gave away “one-fourth of its 2,000 loaves of daily bread, alongside Bibles.”)

Slavic Missionary Outreach, in an update sent in March, said that since grocery stores have not been open as much, its staff has tried to buy bread wholesale or make it themselves. Some of their neighbors had been going days without food.

“We have our own small bread factory that bakes 1,700 loaves of bread daily, which are then distributed to hungry people by our staff,” they wrote in a letter soliciting support. “We don't know how much longer we can do this. We are trying to buy leftover flour stocks from large bread factories that have closed.”

Ukraine is known as the breadbasket of Europe. The war’s impact on its wheat crop will extend globally. Already, reports expect the disruption will affect Lebanon and Egypt, which rely on imports for government-subsidized bread to feed the hungry. Together, Russia and Ukraine provide almost a third of the world’s wheat and barley exports.

And as the Russian invaders attempt to cut off Ukrainians from their own crops and supplies, the oldest generations recall the deadly famine caused by Joseph Stalin’s seizure of goods the century before. The Soviet dictator had seized crops, livestock, and food itself.

Following the conflict in Crimea, Ivan Rusyn, president of UETS, reflected on this history in Bible Study Magazine:

For Ukrainians, bread is very significant. In 1932 and 1933, we had the Holodomor—a man-made famine. Up to six million Ukrainians starved to death. … Because of this, bread is sacred in our culture. You can’t throw bread away.

The metaphor of Jesus as the bread of life has a lot of meaning for Ukrainians, and the image that the Bible is bread for our souls is very important. We use this to help others understand how vital the Bible is to our lives.

In September, some Ukrainian churches celebrate Harvest Day. During the church service, one pastor will hold up a loaf of bread while another holds up an open Bible. They pray for both, recognizing the need for both. The physical and spiritual needs for bread are not competing but complementary.

Sergey Nakul, pastor of Grace Reformed Church in Kyiv, recently posted a video showing how certain parts of the supermarket, like the meat and seafood counters, were completely empty but thanking God that there was still bread.

“Yes, we have bread,” he said, “but in this period of time we better understand words of Lord Jesus, ‘I am the Bread of Life.’”

Ukrainian churches have developed a network for sharing supplies during the war. In the early days, they helped people evacuate. Now, they’re distributing supplies to those who are staying, like the elderly who have nowhere to go or refuse to leave their homes.

The sirens go off so frequently that some of them simply remain in the basements of the buildings instead of going up and down the stairs each time. It's there that volunteers distribute bread and offer whatever encouragement they can. Additionally, the team distributes supplies to families of soldiers.

Among the military, bread again offers them a reminder of hope when Raychynets offers Communion. His team brings New Testaments with highlighted passages of hope and encouragement. Around two or three dozen soldiers typically take copies.

From his background during the Balkan War and visits to other countries like Lebanon, Israel, and Northern Ireland, Raychynets has experienced the uncertainty, fear, and pain of people in traumatic circumstances. He never tries to impose his faith on them, but when people come to him with questions about God and suffering, he engages them in a conversation.

“I personally don’t believe in answers. I believe in good questions. When they ask me questions, I can ask counter-questions to [encourage] them to think further, to think deeper, to think wider about the situation,” Raychynets said.

Many Ukrainians don’t know where their next meal will come from. Many of their famed wheat fields may not bear a crop this year. However, those faithfully serving in Ukraine hope that there will be a harvest in the country all the same.

“When you are in a situation like these people, you are more sensitive to the divine, to something that is beyond our humanity,” Raychynets said. “We need a physical bread as nourishment for our bodies, but then we need also a spiritual bread. The Word of God feeds our souls.”