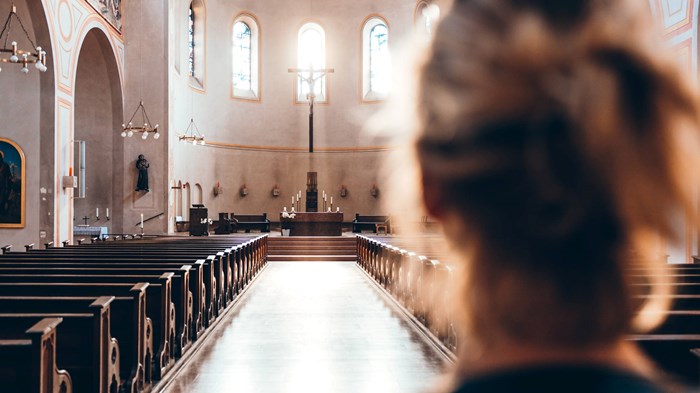 Most Protestant pastors say a woman could be the senior pastor at their church, but that varies dramatically among denominational groups.

A Lifeway Research study asked US Protestant pastors about six potential leadership roles and if women are permitted to hold them in their congregations. While a slight majority say the position of senior pastor is open to women, a broader consensus exists for other positions.

Close to 9 in 10 pastors say women could be ministers to children (94%), committee leaders (92%), ministers to teenagers (89%), or coed adult Bible study teachers (85%) in their churches. Fewer say a woman could be a deacon (64%) or senior pastor (55%), while 1 percent say none of these roles are open to women. Fewer than 1 percent say they are not sure.

“Someone without context may think differences of opinion on where women can serve in church are simply fickle or archaic perspectives. But these are not questions of opinion as much as biblical interpretation,” said Scott McConnell, executive director of Lifeway Research. “This question has been debated for centuries with biblical scholars in different denominations coming to different conclusions about what Scripture means.” 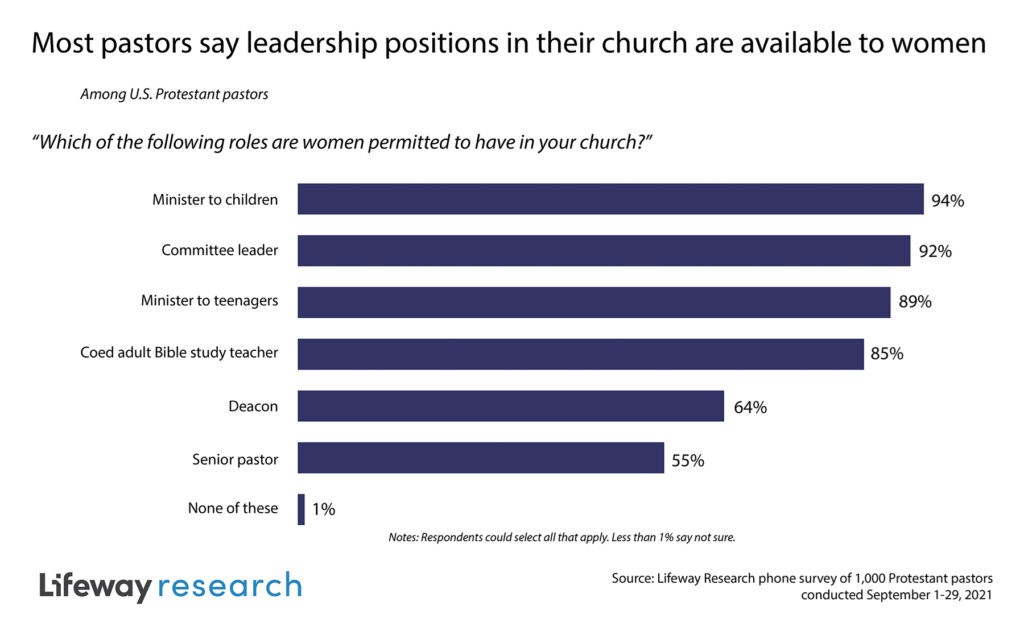 Due to specific convictions about biblical interpretation, different Protestant denominations have varying levels of openness to women serving in certain leadership positions. In general, pastors at mainline congregations say their churches have fewer restrictions on the roles in which a woman can serve compared to evangelical churches.

“The reason some pastors make a distinction between women leading as pastors or deacons or even teaching men compared to other leadership roles is because of how they interpret the Bible,” said McConnell. “In the Apostle Paul’s letters, he gives instructions to churches regarding these specific roles. But Protestant churches disagree on his intent.”

Most pastors in all denominational groups say women could be ministers to children, ministers to teenagers, committee leaders, or coed adult Bible study teachers in their churches.

Specifically, Methodist and Pentecostal pastors are slightly more likely than Restorationist movement, Lutheran and Baptist pastors to say women could be ministers to children or teenagers. Methodists are among the most likely to say women can be committee leaders (98%) and the most likely to permit women to be coed adult Bible study teachers in their churches (100%). Lutheran (77%), Baptist (74%), and Restorationist movement (62%) pastors are the least likely to say their churches are open to women serving as coed Bible study teachers.

Most Methodist (88%), Pentecostal (83%), Presbyterian/Reformed (81%), nondenominational (79%), and Lutheran (60%) pastors state their churches allow women to serve as deacons. Around half of Restorationist movement (49%) pastors agree. Baptists (29%) are the least likely to say a woman can be a deacon at their churches.

More than 3 in 4 Methodist (94%), Pentecostal (78%), and Presbyterian/Reformed (77%) pastors say a woman can be the senior pastor at their churches. Those at Lutheran (47%) and nondenominational (43%) churches are more split, while fewer Restorationist movement (25%) and Baptist (14%) pastors say their congregations are open to women senior pastors. 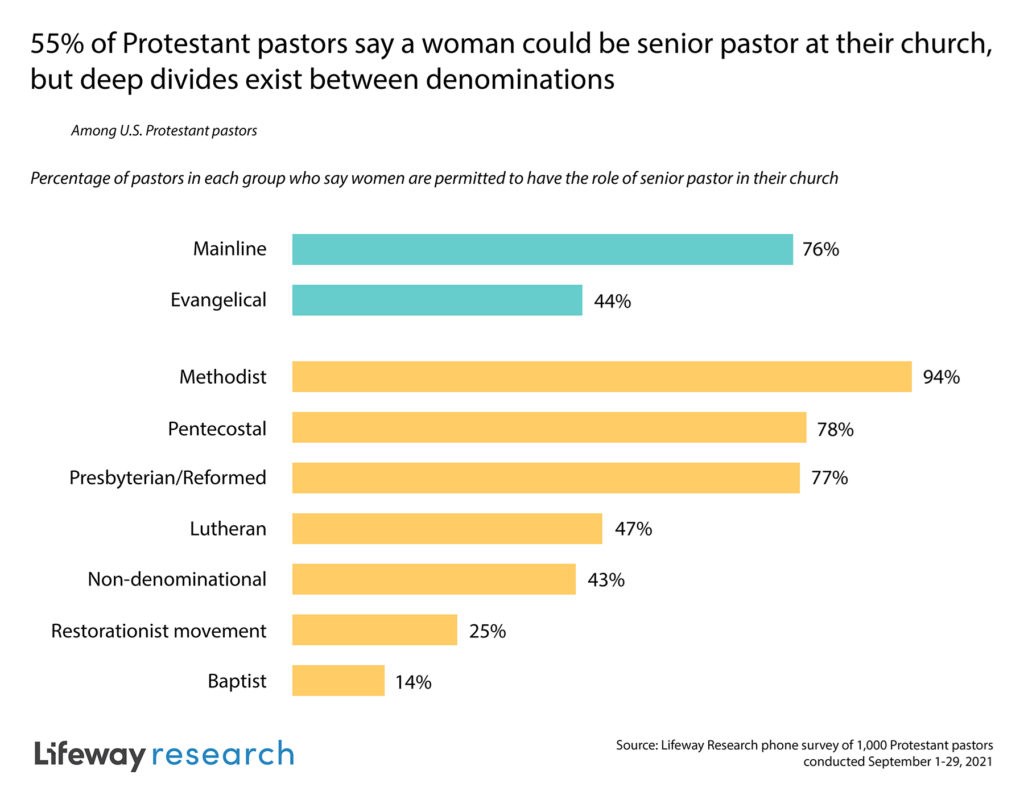 “While individual denominations in these historic branches of Protestantism are too small to analyze separately in this study, it is worth noting that denominations within these categories can differ greatly on this topic as is often seen among different Lutheran and Presbyterian denominations,” said McConnell.

Denominations aren’t the only factor that reveals differences in the roles of women within their churches.

African American pastors are most likely to say women can serve in their church as ministers to teenagers (97%) and more likely than their white counterparts to say a woman can be a coed Bible study teacher (95% vs. 84%).

Pastors at churches in the Northeast are also more open to women leading in certain ways. They are among the most likely to say a woman can lead in their congregation as a deacon (77%) or a coed Bible study teacher (89%).

“While the Apostle Paul mentions differences in a couple of specific church roles, any difference in the standing of women and men in the church ends there,” McConnell said. “When discussing a person’s relationship with God, he teaches, ‘There is no Jew or Greek, slave or free, male and female; since you are all one in Christ Jesus’ (Gal. 3:28, CSB).”