Beyond Pope’s Apology, Indigenous Christians Carve Own Path to Healing 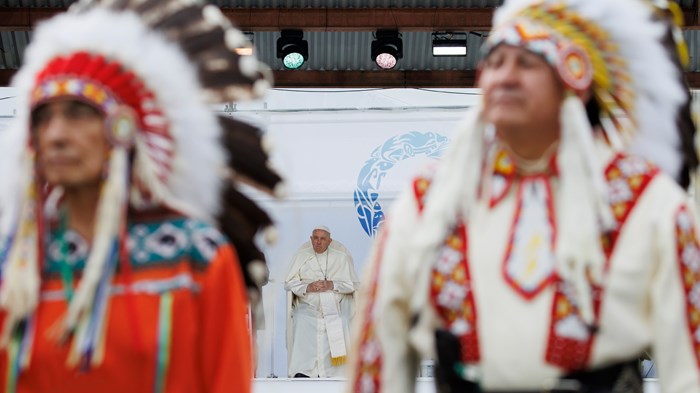 The fire was eerily reminiscent of the more than 50 churches that were defaced or destroyed across the country a year ago, weeks after the discoveries of the remains of residential school students began making international headlines.

This month’s fire started in a back alley on July 6, according to Dawson. By the next morning, the church’s two-story building was completely ravaged. Fire inspectors are still investigating the incident to determine whether the blaze was deliberately set.

Dawson is from the Nuu-chah-nulth Nations on the western end of Vancouver Island. She serves as lead pastor of Street Church, which is part of the Foursquare network of churches in Canada. Its pastoral team are all alumni of First Nations Bible College.

The pope’s apology has galvanized Dawson’s desire to share Christ with other indigenous peoples. “I find it more urgent than ever to find a new building [for my church],” she said.

“What the priests and nuns at these residential schools did to us was evil,” Dawson said. “But the worst thing they did to us: They made us indigenous people hate the name of Jesus.”

On Monday (July 24), Francis apologized for the Catholic church’s role in setting up Canada’s residential schools and perpetuating decades of abuse against First Nations, Inuit, and Métis children.

The pope’s weeklong trip to Canada came on the heels of a visit by indigenous leaders to the Vatican in late March.

Speaking in Spanish at Maskwacis, Alberta—the site of the former Ermineskin Residential School, which was operated by Roman Catholic missionaries from 1895 to 1975—Francis acknowledged the “physical, verbal, psychological, and spiritual abuse” that children suffered at residential schools.

Beginning in 1831, more than 150,000 of these children attended residential schools. And although the last school closed in Saskatchewan in 1996, the trauma of being forced to relinquish their cultural traditions, languages, and practices continues to pervade generations of indigenous peoples.

At Maskwacis, Francis kissed a bright red banner displaying the names of 4,120 children who had died in residential schools and issued a plea for forgiveness for the “deplorable evil”:

I am sorry. I ask forgiveness, in particular, for the ways in which many members of the Church and of religious communities cooperated, not least through their indifference, in projects of cultural destruction and forced assimilation promoted by the governments of that time, which culminated in the system of residential schools.

About two-thirds (63%) of indigenous peoples in the country identify themselves as Christian, according to a 2011 poll by Canada’s National Household Survey. More than half are Catholic and the rest are Protestant or Orthodox.

Indigenous evangelical leaders in North America both witnessed and experienced myriad responses to the papal apology, ranging from anger and grief to gratefulness and relief.

“My initial thought was that we don’t need another apology. We need an apology that is lived out,” said Susan McPherson Derendy, who is Nehiyaw-Swampy Cree and teaches theological education through an indigenous lens to First Nations Christians. “But some felt that many residential school survivors and their families needed to hear it.”

Shari Russell, a consultant for the Salvation Army’s Indigenous Ministries, is from the Yellow Quill Nation in Saskatchewan. Her older sisters were sent to Catholic residential schools.

“I have some sadness as my sisters have journeyed on to the other side. This would have been helpful for them to hear,” she said.

Terry Wildman, who is Ojibwe and Yaqui and the US-based director of spiritual growth and leadership at InterVarsity’s Native Ministries, expressed gratitude for the pope’s apology while also recognizing that it had stirred up controversy.

“This doesn’t complete anything, but it opens new doors for further conversation and feedback from indigenous peoples,” he said.

Last summer, the discovery of numerous unmarked graves on the sites of former residential schools in Kamloops, British Columbia, and Marieval, Saskatchewan, horrified the world—their existence evidence of the 25,000 First Nations students who never returned home.

“I know the weight of the burden of grief that our indigenous peoples carry, as I have personally experienced it myself through the loss of my son,” Dawson said.

Dawson’s son was killed three years ago. In moments when the pain has been too great for her to carry, she has called on Jesus for help. Her Christian faith is something she hopes she can share with other indigenous persons she encounters on the street who have suffered similar losses.

Street Church has served its community for 29 years and has run services on Sundays, Wednesdays, and Fridays to reach out to the homeless in its vicinity. During the pandemic, the congregation moved from offering food services to providing care packs for visitors, who heard praise and worship songs and testimonies about God while receiving physical nourishment.

As she awaits the fire investigators’ findings, Dawson is looking for a new ground-floor location for Street Church in the Downtown Eastside, one of the city’s poorest areas with one of the largest urban populations of First Nations people across Canada (and where the original church was located). Being there means her church is well poised to reach out to those who are experiencing prolonged suffering brought on by the residential school system.

Many of the indigenous leaders interviewed by CT said that Canadian evangelicals are often dismissive of or indifferent toward the atrocities committed against indigenous peoples.

“Many evangelicals say their denomination didn’t run a residential school,” said Russell. “But they need to recognize that the Doctrine of Discovery has permeated the church and its theology. We need to recognize our own ethnocentrism and racism.”

Samantha Martin-Bird, who works for a nonprofit that addresses inequities confronting indigenous young people, grew up in an evangelical church setting and now lives and worships in Thunder Bay, Ontario. The citizen of Peguis First Nation in Manitoba cited King David making amends for Saul’s wrongdoing (2 Sam. 21:1–14) as an illustration of how evangelicals might still be held accountable.

“Evangelicals tend to think mainly about their own personal sin or wrongdoing,” she said. “But in this story, the whole community suffered harm and experienced famine because someone (Saul) who had already died broke a treaty [with the Gibeonites]. David was not related to Saul, but he was still asked to make it right.”

Denominations like the Christian Reformed Church in North America (CRCNA) have followed in David’s footsteps. Canadian CRC congregations committed to several initiatives from the Truth and Reconciliation Commission’s 94 calls to action, including championing equity in education and educating the laity on this history.

“Even though the CRC didn’t run a residential school, we are beneficiaries of the colonial system that the residential schools represented,” Mike Hogeterp of the CRCNA’s Centre for Public Dialogue told CT last year.

Since 1994, the Evangelical Fellowship of Canada (EFC) has worked to strengthen its ties with the indigenous community. They formed a task force in 1995 to create educational resources for churches. More recently, the EFC presented a paper, “Stewarding Sacred Seeds,” at NAIITS’ 2020 symposium, which outlined seven commitments that were subsequently adopted. These included recommitting to the Reconciliation Proclamation, reviewing existing church resources, repudiating the idea of neutrality on issues pertaining to indigenous justice, and developing a theology of stewardship of land and creation.

“To come alongside Indigenous sisters and brothers is to listen and ask questions,” wrote EFC president Bruce J. Clemenger last year. “When we own the shame of what was done in this land to our neighbours and their ancestors, we will be motivated to pray and seek healing for our country.”

One area that indigenous Christian leaders are investing in as they journey toward reconciling faith and culture is the field of theological education.

Last July, Russell was seconded to Indigenous Pathways, a nonprofit charitable organization incorporated in Canada and the United States that works globally to improve the future of indigenous peoples through training, community engagement, and formal education.

Part of this work includes her role as associate director at NAIITS (formerly the North American Institute for Indigenous Theological Studies). The indigenous learning community offers MA and PhD programs that encourage the development of written work around biblical and theological themes from indigenous perspectives.

Derendy attended church as a child and teenager, left the faith, and returned in her 20s. A prayer and counseling session she attended in the mid-1990s helped her see herself “as a Cree child of Creator God, as opposed to the negative and toxic stereotypes [of indigenous women] that were a part of societal conditioning.” What Dakota elders later said to her—that God’s will for them was to be good Dakota men—was also pivotal in confirming her journey of faith and providing her with greater guidance and direction.

Today Derendy is Keeper of the Learning Circle at the Sandy-Saulteaux Spiritual Centre in Beausejour, Manitoba, where she is working to implement a curriculum that reflects a decolonized, indigenized approach to theology. The center trains and equips people for indigenous leadership roles in the United Church of Canada and elsewhere.

Indigenous leaders are also embarking on efforts to contextualize the gospel through language recovery.

Last summer, Wildman and his team, made up entirely of North American indigenous people, published the First Nations Version of the New Testament. The decision to publish it in English, he said, was intentional.

“Boarding and residential schools have been very successful in taking our languages from us,” said Wildman, who grew up in Michigan and now lives in Arizona on the traditional lands of the Pima and Tohono O’odham. “Less than 10 percent of us can read our own language. We wanted to take this colonial language, make it serve us, and incorporate wordings and idioms that are more Native-friendly.”

Feedback on the First Nations Version from both indigenous and nonindigenous believers has been “phenomenal,” in Wildman’s words. Just this week, he signed another contract with InterVarsity Press to translate Psalms and Proverbs, slated for publication in 2024.

For Dawson, reconnecting with the language of her culture is key to processing the trauma she experienced. “I wish I could learn my language [more]. I know very little,” she said.

Martin-Bird said that evangelicals should invest in the efforts to revitalize indigenous languages in response to their erasure. Reading the Bible in Ojibwe, Hebrew, and English, she said, is a practice that has enabled her to develop a greater love for Scripture and a deeper appreciation for its richness and complexity.

While she did not feel disconnected from her indigenous identity, she described it as “fractured” due to the church’s colonizing influence. An example of this, she said, is that she is not fluent in Cree or anishinaabemowin (the Ojibwe language). But exploring beloved Bible stories—such as Abraham sacrificing Isaac in Genesis 22 and the account of Jesus’ birth in Matthew—in Ojibwe during Lent and Advent was enriching.

“I wanted to sift through familiar stories and see how different they felt [in another language],” she said.

In the view of these indigenous evangelical leaders, the grief that persists and the depth and breadth of what they ache to accomplish do not negate opportunities for celebration.

This August, the Salvation Army will host a Celebration of Culture and Pow Wow in Pine Lake Camp, Alberta, where indigenous peoples will have a place to celebrate their heritage and faith.

“Years ago, the church would not have allowed this. Now they’re sponsoring it,” Russell said.

To her, the fact that a Christian ministry is organizing this event gives her hope for the evangelical church at large. “Churches ought to look at how they teach and educate clergy and congregations about what has happened and how we can begin to live in right relationship with one another,” she said.

“The gospel story of Jesus brings life and wholeness. Bringing about and seeing that redemption happen is something I hope and long for.”

Beyond Pope’s Apology, Indigenous Christians Carve Own Path to Healing