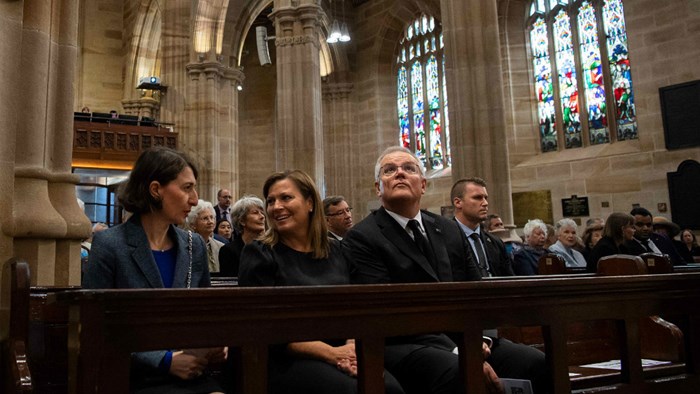 Scott Morrison went to church. And he invited the journalists along too.

One month before Australia’s federal election in 2019, the prime minister traveled to Horizon Church, a Pentecostal congregation in New South Wales. He closed his eyes, raised his hands, and let the cameras click away.

The images drew a sharp reaction from a public uncomfortable with charismatic worship—and from Christians who saw it as a publicity stunt.

But then Morrison won. His Liberal-National Coalition (LNC)—a center-right party—overcame the predictions of pollsters and secured 77 seats.

“I have always believed in miracles,” he said. “And tonight we've been delivered another one.”

Three years later, Morrison returned to the same church. Again the journalists followed. But this time the election didn’t go his way. The LNC lost to the Labor Party on May 21, and the next day Morrison stood up at Horizon Church and read a few passages from the Bible.

As Morrison leaves office, evangelicals are assessing the way his faith interacted with his politics: how that was covered by the media, how it was viewed by the public, and how they would want Christians to act, as Christians, in the public sphere.

“Morrison’s faith has become a story because he is prominently and publicly Christian, as opposed to many past Christian prime ministers whose faith has been a more private affair,” said Chris Mulherin, an Anglican priest and the executive director of ISCAST (formally, the Institute for the Study of Christianity in an Age of Science and Technology), a group working to strengthen the relationship between faith and science. “Morrison has used his faith believing (rightly, I think) that sincere faith—even Pentecostal faith where he is photographed with hands in the air and eyes closed—is not only attractive to Christians but also to a silent almost-majority who respect religious belief.”

About 60 percent of Australians identify as Christians, according to the 2016 census, but only about 15 percent are connected to a church. In practice, the country’s public spaces are essentially secular, and religious politicians are expected to keep their faith private. It’s uncommon for leaders to even gesture at a generic Christian culture and tradition.

Morrison’s public expressions of faith were, for that reason, quite jarring. The national spotlight found him as he spoke about the laying on of hands; receiving a vision from God telling him to run for office; and working behind the scenes to get Hillsong founder Brian Houston an invitation to meet with US President Donald Trump at the White House.

Previous prime ministers, including Kevin Rudd, Tony Abbott, and Malcolm Turnbull, all described themselves as Christians, but some people saw Morrison’s faith as sort of off-putting—or at least questionable.

“He doesn’t keep it purely private, but neither does he wear it on his sleeve,” Bird said. “It comes out from time to time.”

The political value of Morrison’s faith was never exactly clear. If the public exposure of his Pentecostalism was a strategy to garner support, the math didn’t seem to add up. No Australian political party has won the majority of churchgoing voters in the last decade. Though one 2016 survey found that 40 percent of churchgoers supported the LNC, that works out to about 6 of every 10,000 voters. Not exactly an election-winning bloc.

And for most Australian evangelicals, that hasn’t been a goal.

“Australian evangelicals don’t have the numbers to take over a political party,” said John Sandeman, who founded the Australian Christian publication Eternity. “Our desire to impact society is not as politically directed as in the US.”

Instead, Aussie evangelical engagement in politics is shaped by a culture that doesn’t put much faith in politicians, according to Mark Sayers, the senior leader of vision and teaching at Red Church in Victoria.

Mandatory voting laws mean almost everyone goes to the polls on election day, but they rarely feel a strong emotional connection with the person they’re voting for. Australia uses ranked-choice voting in national elections, so voters aren’t even asked to give 100 percent of their support to one person but to just state the order of their preference.

“We are very cynical about politics and deeply suspicious of leadership,” Sayers said. “We are also deeply egalitarian, and due to the ‘tall poppy syndrome,’ we have no time for leaders who lose touch with ordinary people. Australians will punish at the polls a leader regardless of their politics who forgets from where they have come or who is not authentic.”

Some evangelicals also may have not resonated with Morrison’s public expressions of faith because of cultural distinctions between evangelicals and Pentecostals in Australia. Historically, evangelicals in the country have not started new denominations or created a strong, independent subculture. They worshiped in the three quasi-official Protestant churches—Anglican, Methodist, and Presbyterian—or joined one of the smaller Baptist, Churches of Christ, or Seventh-day Adventist churches. Most were culturally moderate, if not mainstream.

Pentecostals, on the other hand, have stood apart. And since the 1980s, these churches and networks of churches have grown rapidly—without ever establishing deep connections with other evangelicals.

“Pentecostalism is the new kid on the block,” said Meredith Lake, author of The Bible in Australia: A Cultural History, “and can appear a bit mystifying.”

But the sharpest criticisms from Christians who disliked the way that Morrison mixed his faith and politics weren’t directed at his charismatic sensibilities. Nor were they focused on his public displays of piety. Christians were frustrated, instead, when they couldn’t see that the prime minister’s being a believer made any difference.

“His own stated position is that ‘the Bible is not a policy handbook,’” Lake said. “My question is, Are his government’s policies any different because Morrison is the leader of his party, rather than another, non-Pentecostal member of the cabinet? Do we see evidence of Morrison’s Pentecostal faith causing a departure from the imperatives of neoliberalism?”

Last fall, a diverse group of Christians asked Morrison to open the country to more refugees from Afghanistan. They appealed to their shared faith, but it didn’t get the results they hoped for.

“Scott Morrison in his maiden speech to Parliament in 2008 spoke effusively about his personal faith in Jesus. … He spoke of his debt to pastor Brian Houston. He spoke of his heroes like Bono, Tutu, and Wilberforce and that he wanted to make poverty history and lift Australian Aid,” Costello said. “Then he presided in government overseeing the deepest cuts to Australian Aid, leaving it at its lowest level in our history.”

Evangelicals concerned about climate change had a similar experience. Appealing to their shared faith with the prime minister didn’t seem to help their cause. Common Grace, an evangelical social justice advocacy group, knitted scarves that showed the increase of the average global temperature over the last hundred years, mailed them to their representatives, and asked to meet one on one.

“Many of the conservatives, including Scott Morrison, would not meet with Christians in their local electorate who were gifting them a scarf, and many didn’t even respond when their gifted scarf was mailed to them,” said Brooke Prentis, former CEO of Common Grace. “To know you can’t meet with your local member as a Christian and share what matters to you as a Christian was very disheartening.”

On the other hand, Morrison did at times back issues that evangelicals in Australia cared about, but he couldn’t deliver a victory. Perhaps the most important political fight of Morrison’s career was the fight for a religious freedom bill, which left many evangelicals disappointed.

When Morrison took office in 2018, replacing Turnbull, he was expected to deliver on an LNC promise to pass a religion antidiscrimination bill. The issue had become a concern after Australia legalized same-sex marriage.

“Religious freedom is widely seen as having been a key issue in the 2019 election, which Morrison’s party unexpectedly and decisively won,” said Natasha Moore, a senior research fellow at the Center for Public Christianity.

Despite this mandate, Morrison’s government struggled to turn the religious freedom bill into law. Both Christian conservatives and LGBT advocates greeted the first two drafts of the bill with disdain. The third, introduced last fall, was deemed better by evangelicals but could not command a wide base of support.

“We were portrayed as bigots, haters, etc.,” said David Ould, an Anglican minister in Sydney. “We had been pointing out to the political parties that we’re only asking for what they want for themselves, which is the right to hire people who believe—actually believe—what they stand for. … But it’s been whipped up into hysteria over, you know, gay teenagers and trans teenagers, who apparently we want to just throw out of all the schools.”

Morrison couldn’t maintain control of his own party, and earlier this year five members crossed the aisle to vote with the opposition on an amendment to weaken protections for taxpayer-supported religious schools. Religious groups withdrew their support from the modified bill, and the proposal died. Morrison attempted to revive it in the final month before the 2022 election, as part of the agenda for his next term, but then he went down in defeat.

“The religious discrimination bill failed despite extensive consultation, many rounds of submissions from across the political spectrum, and a strong push from the party in power,” Moore said. “The bill and the whole question became toxic. Little headway was made in convincing the public that this bill was anything other than an attempt to enshrine bigotry.”

In the end, Morrison disappointed the evangelicals who agreed with him on policy, as well as the ones who didn’t. As he leaves office, it’s unclear what future, if any, there will be in Australia for his brand of evangelical politics.

Some evangelicals are asking whether they should reconsider supporting the Labor Party. Others, such as Barney Zwartz, a senior fellow at the Center for Public Christianity, hope Christians can exert influence by being politically independent.

“However counter-intuitive it sounds, Christians should be swinging voters,” he recently wrote in a Melbourne newspaper, “looking at all the parties afresh each time round.”

Morrison, for his part, decided to go back to church and make his last statement as prime minister at Horizon Church. After years of criticism for how he connected faith and politics—whether he should do it at all, do it a different way, or do it more effectively—he pulled up the Bible on his smartphone and read from Micah 7.

“My God will hear me,” he read. “Do not rejoice over me, enemy of mine. Though I fall, I will rise. Though I live in darkness, the Lord is a light for me.”