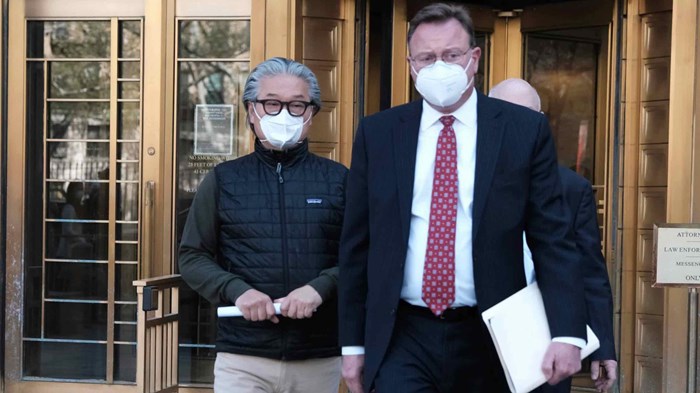 The allegations come a decade after Hwang settled a civil case for insider trading. In the years since, the Korean-born fund owner has worked with evangelical institutions as a donor, board member, and voice in the faith-and-work conversation. If convicted, Hwang would join a list of spectacular securities fraud cases like Bernie Madoff’s and face multiple life sentences in prison.

The US government alleges that Archegos under Hwang’s direction engaged in market manipulation—buying up large portions of stocks in companies to inflate the price—and then lied about its market exposure to banks to get more and more funding.

In a few days in 2021, the government says that scheme resulted in losses of $10 billion directly to banks financing Archegos and the destruction of more than $100 billion of value in a dozen or so companies that Archegos was trading.

Though he had a huge position in the stock market, Hwang was not a famous investor, and his New York lifestyle was not flashy for a billionaire. The son of a pastor, he spoke at small Christian conferences, hosted Bible readings at his firm’s Midtown office, and gave visitors Christian books.

He was known for his Christian philanthropy through the Grace and Mercy Foundation that he founded. Archegos is named for ἀρχηγός, the Greek word used to describe Christ as the “author” of our salvation (Heb. 2:10) and the “prince” of life (Acts 3:15).

Hwang told fellow Christians how he believes investment helps set a “fair price” for stocks, and that that work is honoring to God. In a comment reported in the indictment, Hwang referred to a stock price going up because “it is a sign of me buying,” followed by a laughing emoji, which federal prosecutors took as a sign of market manipulation.

“In many countries, people make ‘speculations’ rather than investments,” Hwang said in an interview in Korean at the 2018 Yonsai University Conference on Faith & Work. “While reading the Bible I realized that God likes setting a fair value. … Helping companies establish an appropriate market price by making investments and supporting them to do well is all part of doing God’s work.”

“I try to invest according to the Word of God and by the power of the Holy Spirit,” he continued. “In a way, it’s a fearless way to invest. I’m not afraid of death or money. The people on Wall Street wonder about the freedom that I have, actually.”

Based on the dollar amount, the indictment of Hwang appears to be the biggest white-collar indictment of an individual since that of Bernie Madoff in 2008, which was the largest fraud case in Wall Street history. Individual investors put an estimated $17.5 billion into Madoff’s Ponzi scheme, though those investors in the end believed they had holdings of $60 billion because of Madoff’s representations. Madoff was sentenced to 150 years in prison and forfeiture of all of his assets.

Hwang faces up to 380 years in prison, a maximum reflecting the monetary amounts involved and the potential impact on the financial system, but his lawyer Lawrence Lustberg told The New York Times that the charges had “absolutely no factual or legal basis” and were “overblown.” Hwang has pleaded not guilty to all of them.

Lustberg did not respond to a request for comment from CT. Two top Archegos employees have pleaded guilty and are cooperating with the government.

Though white-collar crime experts told CT that some elements of the case may complicate the prosecution, they agreed Hwang’s indictment is a big deal.

Deputy Attorney General Lisa Monaco, No. 2 at the US Justice Department, traveled to Manhattan for the announcement of Hwang’s indictment, which experts said is highly unusual. The judge at the initial hearing set Hwang’s bond at $100 million, among the highest bails in US history, which he secured through $5 million in cash bail and two properties.

David Miller, a former assistant US attorney at the Southern District of New York who now does white-collar defense at a private firm, said this case is a “very significant prosecution.”

He told CT it was “highly atypical” to see Southern District prosecutors include Racketeer Influenced and Corrupt Organizations Act (RICO) charges in a securities fraud case, as they did in the criminal charges against Hwang and Archegos chief financial officer Patrick Halligan. RICO has historically targeted organized crime, and prosecutors here are alleging that Archegos acted as a criminal enterprise.

Just including that charge would require approval from the criminal division at the Justice Department in Washington, DC. RICO charges come with “significant forfeiture consequences” Miller said, meaning the government could take more Archegos-connected assets.

Federal prosecutors generally secure convictions in above 90 percent of their cases. “They love to win, they love their careers, they love their won-loss records,” said David Shapiro, an expert on financial crimes at the John Jay College of Criminal Justice.

Miller agreed that most federal cases end with a guilty plea, but he added that “there can be complex issues with securities fraud cases, as a general matter.”

Some of the complexity of charges here, as well as the alleged market impact, make the case exceptional, Miller said.

The global investment bank Credit Suisse losing billions over the Archegos collapse is not as emotionally affecting as the individual investors and charities that put their money in Madoff’s hands. But with the indictment, the federal government clearly wants to make a statement about the kind of investing Hwang was doing.

“When those positions had to be sold and this whole thing collapsed, it not only affected the banks who lent these assets, but it affected the market,” said Justin Sher, a lawyer who handles white collar defense cases in New York, representing clients in the financial industry. “In that way, the effects are almost greater than Madoff. All these shareholders who held stock in companies—a lot of those prices were inflated by Archegos’s big holdings and activities. So when Archegos collapsed and pulled away, that froth that maybe wasn’t real disappeared.”

“The commonality is they were bamboozled,” Shapiro said about investors, whether illegal or not. In both situations, he said, people thought, “‘This guy is great!’ You put another million in, and you find out, ‘Hey, it was made up.’”

The “This guy is great!” mentality is partly why Hwang was welcomed back to Wall Street and Christian circles after his earlier insider trading conviction.

Back in 2012, Hwang and his hedge fund Tiger Asia Management paid a civil settlement of $44 million over Securities and Exchange Commission (SEC) charges related to insider trading. The fund itself separately pleaded guilty to a criminal fraud charge, resulting in a year’s probation and a $16 million forfeiture. In 2013, Hwang converted Tiger Asia to Archegos, a family office instead of a hedge fund, which meant the firm was managing his wealth.

As he built a good investment record again, more banks were interested in giving him their money. And his charitable foundation grew.

Christians asking him about faith and finance rarely brought up the insider trading charges, and he did not acknowledge the case either except to say he “made a lot of mistakes.” In one talk at a ministry, he said he had a “bad business problem … I knew I had to go to the Scripture.”

It remains unclear how the case will affect the Grace and Mercy Foundation, Hwang’s Christian philanthropy arm.

The foundation had given away at least $80 million over the past decade to grantees such as Fuller Theological Seminary, Ravi Zacharias International Ministries, Prison Fellowship, and New York nonprofits like the Bowery Mission. It had about $580 million as of the latest tax filing from 2019, before the alleged crimes took place.

Now some ministries have pulled videos of Hwang and other Christian leaders at Archegos speaking at their events.

Fuller removed a video of Hwang speaking on faith and work, and it no longer lists Hwang as a trustee.

Faith Driven Investor deleted a 2019 talk at Redeemer Presbyterian Church by Andy Mills, who served as Archegos’s executive chairman starting in 2014 and then became the co-CEO in 2019. (Mills, a former president of The King’s College, does not list Archegos in his current King’s College bio. He is not mentioned in the indictment, nor is there any evidence of any wrongdoing on his part.)

Prior to Archegos’s 2021 collapse, Christians turned to Hwang for advice on money and theology.

In a 2019 talk at Metro Community Church in New Jersey, lead pastor Peter Ahn asked Hwang, “You have a lot of money. There’s this desire, people want to have it, they think it’s the root of joy, they want to have more. … What wisdom could you impart to the people here so they could continue to see money not as their god, but to see money as a way to bless God’s kingdom?”

Hwang responded by talking first about the positive work that money can do.

“God wires us so differently. You could probably handle fame really well,” he said to Ahn. “I handle money fairly well, because I grew up in a pastor’s family. We were poor, but somehow my mother and father always gave things away.”

Hwang’s father was a Korean pastor, and Hwang moved to the United States when he was about 18. He talked about working in a hotel laundromat as his first job. He went to college at the UCLA, earned an MBA at Carnegie Mellon University, and then started working in finance.

“I enjoy what God has given us,” he continued. “I go to nice restaurants. I confess to you I cannot live very poorly. But I live a few notches below where I could live. I’m just so happy about that. I think Tim Keller and other people say, all the things that entice us, it’s like fire. So money for me is like fire. I love fire, I love watching fire. I love using fire to heat up my home, cooking. But when fire comes out, it’ll kill you.”

Billionaire Who Invested ‘According to the Word of ...