Angry but not shocked at racist violence, the victims' families at funerals this week have a prayer: Let these deaths not be in vain.
Emily Belz in Buffalo, New York|May 26, 2022 06:00 PM 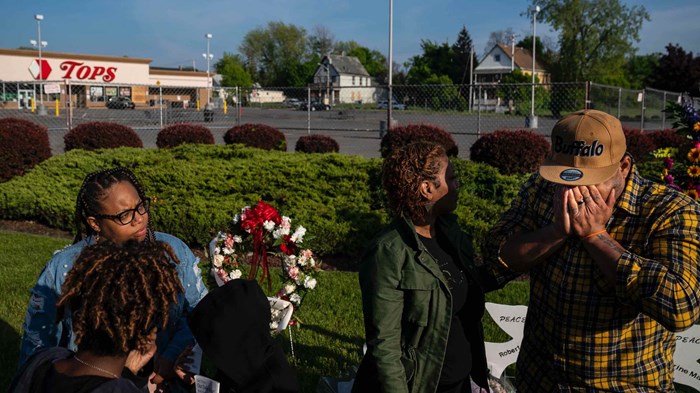 Buffalo this week is bearing the heaviness of 10 funerals all at once.

Even though organizers tried to stagger funeral times, hundreds of cars converged on one cemetery on Wednesday for back-to-back burials. One local congregation, Elim Christian Fellowship, held memorials two days in a row this week, gathering hundreds to cry, sing, and proclaim that death did not have the last word over the loved ones they lost.

The church called for 30 days of mourning in honor of longtime member Celestine Chaney, 65. Chaney was among the 10 people killed in a racist attack at their local grocery store back on May 14. Most of the victims were devout Christians, active in Black churches in Buffalo.

The city’s Christians aren’t rushing the grieving process, even as national news reporters have left town and attention has shifted to a horrifying shooting at a Texas elementary school.

“I’m sure God is angry with what he sees,” said Bishop Glenwood Young Sr., who leads the Church of God in Christ in Western New York. Young’s sister-in-law, 77-year-old Pearl Young, was one of the victims at Tops Friendly Market.

The grief and anger in Buffalo is different than after other recent mass shootings. The shooter, based on officials’ accounts, targeted Black people because of his white supremacist beliefs. He killed the elderly, people who were called mother and auntie by their friends and neighbors. The incident added to the poor neighborhood’s troubles by creating a food desert, with the grocery store indefinitely closed after the shooting.

At the funerals and around the community, conversations swelled with righteous anger. CT heard from people who held to a firm belief that God would do something to address the evil that took place. There was also resilience, as community leaders immediately organized meals, lobbied for new grocery stores, and led worship services at the site of the attack.

But Black Christians in Buffalo also weren’t surprised about the violence that struck around the corner, even though they felt the horror of it personally and specifically.

A Pew Research Center survey from April showed 32 percent of Black adults worried every day or almost every day that they might be threatened or attacked because of their race or ethnicity. That compares to 21 percent of Asian Americans, 14 percent of Hispanics, and 4 percent of white adults.

“I’m f—ing angry,” said Phillip Dabney, 53, who grew up in the neighborhood around Tops grocery store. “There’s a normalization of violence against us, African Americans. It prevents us from valuing our own individual lives.”

Tops was a community gathering place, where people banked and shopped and talked. The East Side of Buffalo, a largely Black neighborhood, is close knit. Everyone CT spoke with knew someone tied to the shooting.

When the shooting happened, Dabney’s niece was in a dance class at a studio one block from the grocery store. She heard the gunshots, and her teachers locked the door. Dabney’s daughter called him in tears because she thought he might have been at the grocery store. “God covers us. It’s not unreasonable that I would’ve been here,” he said, reflecting at a shop a block from Tops.

Dabney described himself as a Calvinist, and he believes some purpose will come out of the attack: “It will not be in vain.”

That was one refrain that victims’ families from Columbine to Buffalo have prayed: Let their deaths not be in vain. That’s what Doreen Tomlin prayed when her 16-year-old was killed at Columbine in 1999, and that’s what family members at the Buffalo funerals prayed over and over.

“Don’t let her dying be in vain,” said Bishop Young at his sister-in-law’s funeral. He exhorted people in the church packed with hundreds to put their faith in Jesus. He earlier also brought up gun laws: “We’re tired. Something’s got to happen.”

Like Pearl Young, most of the victims were devoted churchgoers. The first funeral, held on May 20, was for Heyward Patterson, 67, a church deacon. Then last Saturday, another took place for Roberta Drury, 32. On Monday, Pilgrim Missionary Baptist Church held a funeral for Katherine Massey, 72.

Elim Christian Fellowship hosted Chaney’s funeral on Tuesday and Young’s funeral on Wednesday. Salter’s was at another evangelical church, The Chapel. Four more funerals were scheduled at neighborhood Baptist churches on Friday and Saturday.

Several hundred turned out for the Young and Chaney funerals at Elim. The congregations at both were mostly Black. The funerals were full of Scripture, testimonies, calls to faith, praise songs, and reminders about the Resurrection.

At Chaney’s funeral on Tuesday, people filed past an open casket of the longtime church member who worked in the women’s ministry. Church members passed boxes of Kleenex up and down the aisles.

“When our hearts are overwhelmed, lead us to the rock that is higher than us,” prayed Elim pastor Betty Pierce Williams. “We thank you as our sister made her transition you reached out and took her hand. You have always known this day would exist. So help us understand it … not from how we see it but how you see it.”

“On May 14, it looked like death won,” said Bronner. “I want to tell you today: Death don’t have the last word. … On May 14, that person might have believed he had the final word. I want you to know God has the final word.” People clapped and shouted amens.

Pearl Young’s sister-in-law Gloria Anderson had dropped Young off at the grocery store on May 14 after a prayer breakfast. The shooter killed Young in the parking lot.

Young had insisted on going to that grocery store because it wasn’t as far out of Anderson’s way.

“I have this guilt,” Anderson said. “Last night the Lord began to comfort me.”

Bishop Young said when he heard about the shooting, he sent his son to ring Pearl’s doorbell to see if she was home, but no one answered.

Pastor Andre Clark, Pearl Young’s nephew, grew up a couple of blocks from Tops and remembers when they built the store. He leads a congregation on the East Side called New Direction Christian Fellowship.

“I know my Aunt Pearl,” said Clark. “If she talked to [the shooter], she would’ve introduced him to Jesus.”

At Young’s funeral, one eulogizer said, “Everywhere she went, Pearl told somebody …” and the congregation finished the sentence, “… about Jesus!”

In addition to losing his aunt, Clark’s friend from high school was the Tops manager the day of the shooting, and called him to ask for prayer. “Unless there is God’s healing, [the survivors] are going to have PTSD,” Clark said.

Another community hub is the cigar store a block from Tops where people come and sit and chat. On Tuesday evening, Dane Alexander came into the store wearing a suit. He had just left a wake for his stepbrother, grocery store security guard Aaron Salter.

Like Salter, Alexander had a lifetime of service in the Buffalo police force. He had also worked security at Tops at one point, but he feels like he can’t do police or security work anymore.

According to official reports, Salter heroically gave his life defending the store: He shot the shooter, but the shooter was wearing a bulletproof vest and turned on him. At his funeral, the Buffalo Police Department gave him line-of-duty death honors even though he had retired.

“There is evil among us, but God is alive,” said Alexander. “Christians, we have to speak up. The time of denial is over.”

He lit up a cigar and sat back in a chair, talking to neighbors as they came in. He had been in the cigar shop the night before the shooting, and remembered telling another regular who was depressed that tomorrow was a new day. The next day he was taking a nap when he got a call that there was a shooter at Tops, and then he tried to figure out who was working security.

“It ended up being Aaron,” Anderson said. As Anderson sat in the shop on Tuesday, news flashed on the TV on the wall of the mass shooting at Robb Elementary School in Uvalde, Texas.

The national attention overwhelmed the grieving process. Families didn’t find out until the evening who had made it out of the store and who didn’t, and by that time the media had already swamped the area.

Press conferences and outside offers of help, from Al Sharpton to food banks, meant many locals hadn’t had a minute to stop and think.

Adding to the chaos of media attention was the fact that the attack was livestreamed, and victims’ family members told me they came across the video in their social media feeds without wanting to. Ministry leaders are trying to figure out how to make sure children in the community don’t see the video or have it pop up on their phones.

A week after the shooting, when there was supposed to be a moment of silence at Tops, there was a meal distribution and media everywhere. Some Black Hebrew Israelites showed up and were shouting on a microphone. Another woman tried to play gospel music to drown them out. People did quiet down for the moment of silence, finally.

The funerals, then, served as a space without cameras—organizers asked them to stay behind a rope in the church parking lot—and a time to worship.

Young preached at his sister-in-law Pearl Young’s funeral from Amos 5:4. He said the time of Amos in Israel was a time like now in the United States, when there was unrest and people forgetting God. “Seek me and ye shall live,” he read.

“With all the death in the land, murders, violence, yet God has said, ‘Seek me and you’ll live,’” Young preached. He read through a series of Scriptures: Psalm 63, Proverbs 4, Psalm 90, and James 4. The congregation knew a lot of the selections by heart and murmured the verses.

Then he read Pearl Young’s favorite Bible verse, Psalm 30:5: “Weeping may endure for a night, but joy comes in the morning.”

Even after the services, family members kept pulling out Bibles, but it wasn’t just to find comfort for grieving.

Pastor Andre Clark, talking to CT shortly after burying his aunt Pearl, pulled out his Bible to read Proverbs 31:8–9: “Speak up for those who cannot speak for themselves, for the rights of all who are destitute. Speak up and judge fairly; defend the rights of the poor and needy.”

“If you say you’re a Christian, what you’re going to say is, ‘I’m speaking up for those that cannot speak—at the watercooler, at the football game, at our churches, at our PTA meetings … not just saying a prayer on Sunday morning,” he said, specifically addressing white Christians.

“Otherwise, we’ll be right back to ‘everything is OK,’ until there’s another Pearl Young lying dead in front of a Tops supermarket. It cannot be for a season. … Someone has to continue to speak.”