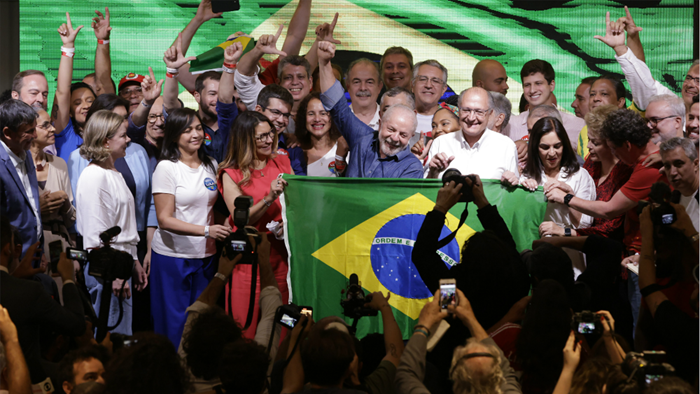 Brazil president Jair Bolsonaro and his surrogates worked to win evangelical voters up to the final hour of the runoff election on October 30.

Christian influencers posted pictures with him on Instagram, proudly announcing they would be supporting Bolsonaro’s bid for a second term. And First Lady Michelle Bolsonaro rallied women at Rio de Janeiro’s Assembleia de Deus Vitória em Cristo (Assembly of God Victory in Christ), one of the largest churches in the country.

“Beloved, it would have been nice if we had won in the first round,” she said. “But we needed this second round for the awakening of the church.”

To Christian voters not persuaded by the president’s own faith—though the Catholic former military officer was rebaptized six years ago in the Jordan River—Michelle offered her own evangelical bona fides.

But these efforts ultimately proved insufficient. One trusted poll released days before the election showed evangelical support shifting slightly—just four points—from Bolsonaro to his Workers’ Party challenger Luiz Inácio Lula da Silva. But when the votes were counted, “Lula,” as he is universally known, won the election by less than 2 percent.

Some observers credit the swing to Lula’s decision to directly appeal to some of evangelicals’ core concerns.

Lula, a former president, became eligible to run for office in March 2021 when the corruption convictions that had sentenced him to 12 years in jail were annulled. Running for president, though, his primary outreach came through biblical references in campaign speeches. Evangelicals make up about 30 percent of the electorate.

That subtle approach changed in a meeting with church representatives in São Paulo on October 19. Lula released a letter stating his positions on a number of core concerns. On abortion, for example, he wrote that “life is sacred, the work of the Creator’s hands” and that decisions on the issue would rest with the National Congress.

On education and ongoing debates about what schools should teach children about gender, he said public schools should work with parents, not against them.

“The home and the guidance of parents are fundamental in the education of their children, and it is up to the school to support them by dialoguing and respecting the values of families, without interference from the State,” Lula wrote.

The letter also addressed false rumors that he would persecute Christians. In May, one member of the legislature was ordered to delete social media posts making untrue claims that Lula and his party supported the invasion of churches and the persecution of Christians. Another Assembly of God pastor admitted this year that he had been telling his congregation without evidence that their church might be closed if the Left returned to power.

“I know people are saying that I’m going to close the churches. In fact, I’m the guy who created the religious liberty law,” he wrote. “For someone to say that I’m going to close churches is so evil and ignorant, it’s hard to believe it. I would never close a church because I think if there’s one good thing people do in life, it’s them strengthening their faith and looking after their spirituality.”

Last election, Bolsonaro received 70 percent of evangelical support. Over the course of his presidency, Bolsonaro seemed to cultivate only a closer relationship with evangelicals, as CT previously reported, appearing alongside well-known televangelists and Pentecostals, including Silas Malafaia, Marco Feliciano, and Edir Macedo, the bishop in the largest prosperity-preaching denomination in the country. The president also participated in the March for Jesus.

Some of his critics saw Bolsonaro’s actions as highly transactional.

“Bolsonaro has manipulated and co-opted Christians, offering himself as the only salvation against the Left, against the Workers’ Party. He presented himself as a messiah. He took important issues for Christians, like abortion and the family, and made them the basis of his campaign,” author and seminary grad student Jacira Monteiro told CT earlier this year. “He also played (and continues to play) a two-sided game: ‘Either I am the president and I will free you from evil, from Satan—namely, from the PT and the Left—or Brazil returns to darkness.’ All the while, his campaign employs aggressive and polarizing language.”

Despite providing a significant boost to Bolsonaro in the last election, however, evangelicals are not all the same.

The Frente Parlamentar Evangélica (Evangelical Parliamentary Front), a group that identifies itself as the official evangelical voice of the country’s legislature, said that its members include 196 deputies and seven senators across 19 different political parties. Only 42 were part of Bolsonaro’s right-wing Liberal Party.

Bolsonaro lost some evangelical support due to his handling of COVID-19 and economic issues. But heading into the general election and then the runoff, he appeared to be building back support. In the final days, however, enough evangelicals changed their minds to make a difference.

“We saw an attitude of contempt, confrontation, and avoiding dialogue. Not only that, a spirit of irresponsibility with people’s health with jokes about people who were in danger of dying,” he said. “The president’s supporters did coffin dances.”

Another important issue for some evangelicals was the environment, said de Carvalho, pointing to increased deforestation and forest fires under Bolsonaro.

“Who defeated Bolsonaro was Bolsonaro himself,” he said.

Given Lula’s narrow margin for victory and Bolsonaro’s reticence to concede, some evangelical leaders are now worried about church unity in coming months.

“Lula’s victory prolongs another 4 years of even more polarization, and the dream of more political options is left for 8 years from now,” tweeted Filipe Duque Estrada, the pastor of Onda Dura Global. “Because in 4 years the only options will be Bolsonaro and Lula again. If Bolsonaro had won, this cycle would have ended.”

Some called for peace.

“I know that in these elections many bonds were broken, people hurt, offenses said, but for every mistake made there is the goodness of God to lead us to repentance and reconciliation,” wrote Christian influencer Zé Bruno on Instagram. “See where you went wrong and repent. Seek to see where they went wrong with you and forgive. Do not carry on evil, but put an end to it through good, love and mercy, for it will triumph over judgment.”