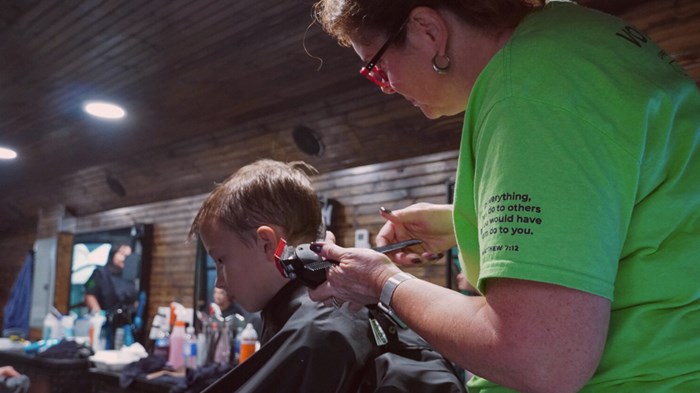 Image: Courtesy of DUO Mobile Mission
A volunteer cuts hair on one of DUO's outreaches.

With six trucks and some volunteers, a church in Tennessee is helping to fill a gap in rural health care. The ministry, Doing Unto Others Mobile Mission, or DUO, thinks other churches can do the same.

DUO is one of four newly announced winners of grants from church insurer Brotherhood Mutual Insurance, which wants to reward innovative church programs that could be replicated across the country. Other winners include a mentoring program with local business leaders and teens, an afterschool tutoring program, and a homeless ministry.

In about two hours with DUO’s fleet, a person in rural Tennessee can see a doctor, pharmacist, optometrist, and dentist, and even get a haircut. The ministry started in 2021 and only operates monthly a few months a year, but it has saved the US health system $3.8 million dollars and 42 emergency room visits, according DUO’s estimates using the Mobile Health Map evaluation from Harvard Medical School.

Jamestown, Tennessee—a city of 1,900 located in Upper Cumberland—needed DUO’s support after losing its only hospital in 2019 due to financial constraints. Emergency services had to take local patients to another hospital nearly an hour away. Another hospital in Cumberland closed in 2020.

Tennessee has the highest closure rate of rural hospitals per capita of any state.

Samuel LeFave, a Christian and recent Tennessee Tech biochemistry graduate, was interested in medical school when he got to know a family in Jamestown and heard about the desperate state of rural health care. His pastor at Life Church in Cookeville, Tennessee, an hour from Jamestown, asked him about setting up a medical program, since LeFave had worked with a free clinic as an undergraduate. LeFave, then 21 years old, dropped his medical school plans in favor of meeting the immediate local problem. DUO launched in 2021.

“I lead Sunday School, youth group; that’s fulfilling, but when you’ve gone to school, worked hard for a degree to serve a need, you want to use that in connection with your faith,” he told CT. It’s been fulfilling for the volunteer medical providers too, he said: “When you can use your talent above your tithe each week, that’s buy-in.”

The new ministry under LeFave bought and outfitted six buses: dental, hair, wellness, eye care, food, and a stage for any kind of church outreach events. The buses are staffed with volunteer medical providers from churches in the region. They see many patients that are homeless or have chronic, unmanaged illnesses.

“I think any congregation of any size could do this to fit their budget,” LeFave said. “It may not be dental and vision for a while—but anyone who wanted to offer wellness services through their church can do it on a very low budget.”

DUO’s dental services are its biggest demand—but a bus with dentists and dental chairs is not the easiest for small churches in rural areas to replicate. Still, studies have shown that in rural areas with few health care resources, churches can be key in communicating the specific medical needs of a community—like substance abuse in Appalachia—to those with outside resources. Churches are also important in convincing community members to get treatment.

“Not everyone has a good background with a health care provider,” said LeFave. “Sometimes the best way to establish trust is a fresh haircut.” The DUO team found that a person hesitant about getting their A1C or lipids checked would be more open to stepping over to the medical bus after a trim.

DUO organizers try to be careful about when and where they offer haircuts, because they don’t want to take business away from locals in barber shops and salons who rely on that for a living.

One key to the mobile medical clinic is that Tennessee allows volunteer medical services without much liability. In states that don’t have that liability protection, churches can apply to be a federally deemed free clinic to be released from significant liability.

DUO has been working on a new need in its region: The remaining local emergency rooms have long waits for psychiatric help. A nurse practitioner from a local church already had a free mental health clinic going, so DUO helped the nurse set up a mobile mental health unit.

The project is still in development but that newly mobile clinic will be able to dispatch a retired ambulance equipped with two mental health nurse practitioners and telehealth access to a psychiatrist to help people in psychological crisis. The organizers recently met with local law enforcement, so the truck will be dispatched to nonemergency cases.

Patients with psychosis going to the ER sit in a hall wearing a special color, LeFave said, which is “traumatic for that patient who is already going through a crisis.” With a mobile mental health unit, “You’re going into the patient’s comfort zone.”

Through the Brotherhood grant, LeFave has four mentors for his program, three in Tennessee and one in Kentucky that runs a clinic. The grant to DUO was a one-time award, but the mentorship relationships continue.

“I have access to them whenever I have a question,” he said. Some are leaders at large churches. “They understand funding and some of the liability.”

Chip Freeman, the business administrator at Bellevue Baptist Church in Memphis, was one of LeFave’s mentors and said he and the other mentors would be available to LeFave as long as needed.

“DUO has experienced great success in a short time period, and they’ve shown how replicable this project is,” Freeman wrote CT in an email.

Brotherhood Mutual started the grant program after CEO Mark Robison noticed that churches had gone through dramatic changes during the pandemic, with declining attendance but increased demand for ministries like food pantries. He wanted to help churches “take risk,” knowing that tithes and offerings and some churches “were going to be a challenge.”

A certified accountant, Robison noted that most businesses fail in the first five years of operating, so he thought his team could help individual churches avoid that. Churches often set up outreach programs without much long-term business strategy, which was evident in the first round of 400 applications for grants Brotherhood received.

“I don’t know that any of them had a real business plan to them,” Robison said. That’s why the program includes mentorship and connections to bigger churches. “One thing we learned about churches is they are horrible at raising money. Most of them have never done a grant application.”

By partnering a smaller operation with large churches with significant budgets, like Memphis’s Bellevue Baptist, Robison hoped that bigger churches could step in as needs arise down the road. And Robison believes these programs might appeal to younger churchgoers, who often give to a specific project rather than a regular tithe.

As the program matures, Brotherhood plans to publish white papers later based on research on the programs they award, to lay out models for other churches.

This first round of Brotherhood winners, awarded last year but not publicized, received grants between $25,000 and $50,000, and Brotherhood has now opened the next year’s round of applications for what they call the Kingdom Advancing Grant. Any church can apply for the grants, not just those connected to Brotherhood. The deadline for new applications is March 31.

“I’m experiencing how sharing the gospel of Christ is a global, team effort,” said Freeman about mentoring LeFave and his team at DUO. “What a personal blessing it has been to me to see there are Christ centered ministries all over this country that want to make a difference for the kingdom of God! All they need is some funding and mentoring to get started.”

This article was updated with information about the grant amounts to winners.