As the helicopters come across the mountain in the opening scene of the television series M*A* S*H, one can see a small, white Christian cross located on the mountain outside of Los Angeles, forming the border between Twentieth Century Fox and Camp Mount Craigs, operated by The Salvation Army.

Three years ago I had lunch at that camp in the company of Major Ernest Clevett. "Our staff is discouraged," he said. He went on to outline the need for an executive who could lead The Salvation Army's eighty-five-person, thirteen-program social service operation back to its original ministry purpose.

It would take me almost two years to turn the direction of the organization around. However, at the end of those two years, it was possible to say that the staff was encouraged and that discouragement was a rare phenomenon.

What factors create discouragement? Are encouragement and discouragement opposite ends of the same continuum? Or are they different experiences? Doctor Frederick Herzberg, writing in ... 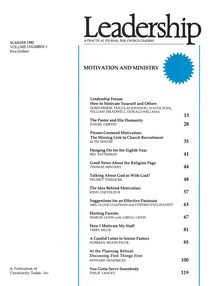