Calvin Miller is a 6' 2" contradiction. A Southern Baptist far from Dixie, he quotes Shakespeare with a soft Oklahoma drawl. His cowboy boots match his affection for Kenny Rogers but belie his love for Charles Dickens. The many fantasy buffs who bought his Singer Trilogy (InterVarsity) and other recent books with titles like Guardians of the Singreale (Harper & Row) can hardly imagine him soaking wet in a baptistry or out knocking on doors every Monday night, calling on recent visitors to his church.

But he has been a pastor ever since he was a junior at Oklahoma Baptist University. He married a young woman from his first congregation, went on to finish his studies at Midwestern Baptist Theological Seminary in Kansas City, and moved to Plattsmouth, Nebraska, in 1961. He and Barbara started a church there and also welcomed a daughter and a son to their home. Then in 1966, they came to Omaha to pioneer Westside Baptist Church, where they still serve.

Miller's great love is communication. He ...

Outreach
CHURCH GROWTH COMES OF AGE
Now that the church growth movement in America is 21, what do Leadership readers think of it?
James D. Berkley
Trending 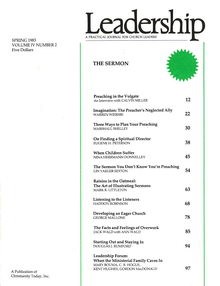