Once upon a time I had a young friend named Philip. Philip was born with Downs Syndrome. He was a pleasant child — happy, it seemed — but increasingly aware of the difference between himself and other children. Philip went to Sunday school at the Methodist church. His teacher, also a friend of mine, taught the third-grade class with Philip and nine other eight-year-old boys and girls.

You know eight-year-olds. And Philip, with his differences, was not readily accepted. But my teacher friend was creative, and he helped the group of eight-year-olds. They learned, they laughed, they played together. And they really cared about one another, even though eight-year-olds don't say they care about one another out loud. My teacher friend could see it. He knew it. He also knew that Philip was not really a part of that group. Philip did not choose nor did he want to be different. He just was. And that was just the way things were.

My friend had a marvelous idea for his class the Sunday ... 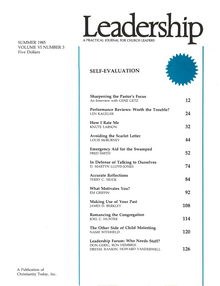 This article is from the Summer  1985 print issue of Leadership Journal. Subscribe to continue reading.