Something is going wrong in Christian communities. We say that we care very much about premarital chastity, and yet anecdotes and studies alike show that many Christians, even in churches that teach sex is only for marriage, have premarital sex.

The statistics on unmarried Christians and sex are both hard to come by and not wholly reliable—people tend to fudge when talking to pollsters, presenting their lives as they wish they were, not as they actually are, so the single Christian talking to a pollster may pretty things up a bit. Still, a few snapshots from the field:

• Three surveys of single Christian adults conducted in the 1990s determined that approximately one third were virgins—meaning, of course, that two thirds were not.

• In 2003, researchers at Northern Kentucky University showed that 61 percent of students who signed sexual-abstinence commitment cards broke their pledges.

• Of the remaining 49 percent who kept their pledges, 55 percent said they'd ... 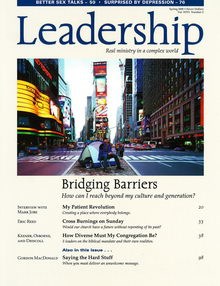