Many tools offer to make preaching prep easier, but struggle is the point.
Chad Ashby 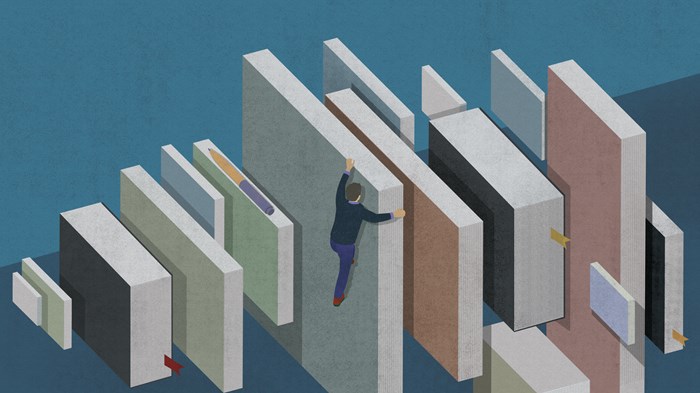 I'm regularly targeted by ads for overworked pastors. The algorithms know I minister in a small church in a small town. (Face it: It’s 2019, and the robots know everything.)

Recently a video cued up on my Facebook timeline in which a spokesman characterized the plight of the weekly preacher in this way: “No other place in the world do you find people having to work a full time job and prepare more than 40 research papers a year.” It was an ad for an online tool meant to simplify sermon preparation by supplying readymade sermon outlines, talking points, series graphics, and pre-written illustrations.

A tool that promises to speed up sermon writing sounds like a godsend, especially in a small-church context with limited-to-no staff. After all, wouldn’t the experts do a better job than I would at outlining the passage?

If proper exegesis were the only goal of weekly preaching, it would be hard to turn down this tool. But it’s not. In a pastor’s study, two works are happening simultaneously: one in the sermon and another in the sermonizer. This is why, despite the personal drain and tempting plethora of resources, I still fight to keep sermon preparation from drifting to the periphery of my ministry.

S. M. Lockridge’s iconic phrase, “Sunday is a-comin’,” takes on a different meaning in the context of my pastoral workweek. Sunday is a looming deadline. It is the exhausting culmination of six days of hard work. It doesn’t matter if I’ve had a midweek funeral, an unexpected counseling situation, or meetings that gobbled up hours of sermon preparation time. I better figure things out because Sunday is a-comin’!

Pastors deal with the mounting pressure of the waning week in different ways. Here in the South, preachers sometimes resort to a “singin’ service” (a service loaded with extra song selections in place of a homily). Everyone knows “singin’ service” is code for “the pastor ran out of time to finish the sermon this week.” And I’ve encountered too much anecdotal evidence not to believe that every Sunday many congregations hear plagiarized sermons from the pulpit. Then there’s the tricky gray area of sermon tools like the one mentioned above that hybridize your work with someone else’s in a “Who actually wrote this sermon?” kind of way.

Although sermon-writing can be a pain, I don’t spare myself much pity on the subject. It’s what I signed up for. Even the three-year-old in Sunday school knows a pastor’s job is to preach. When I interviewed for my current position at College Street Baptist Church, I never asked the pulpit search committee if they expected me to preach weekly sermons, and they never asked if I planned to. We both took it for granted that I would stand behind the pulpit to preach on Sunday mornings as often as I could.

But I admit it’s a slog at times. Especially for new pastors, churning out a sermon every week can be arduous.

This is where the Adversary often finds a foothold in a pastor’s busy schedule. Preachers begin to imagine that preaching responsibilities—something they anticipated with delight as fresh-faced seminary graduates—now have them in a stranglehold. Criticisms from the loudest voices in the congregation echo in their mind all week: “Pastor, your sermons are boring. We want better illustrations. Also, why aren’t you visiting us more often?” Against their better judgment, pastors begin leaning heavily on ministry tools and sermon content from others. They don’t even know when it happened, but somewhere along the way they crossed the line of personal integrity, and worse, sidelined the very activity meant to care for their own souls.

The problem is not the use of resources in sermon preparation. As in any area of the Christian life, the problem lies in the heart. Why am I constantly reaching for the commentary instead of the Bible itself? Why have I become so heavily dependent on the experts? When did my philosophy of sermon preparation become “less time is always better”?

The fight for the heart of the sermonizer is a continuous battle. I find myself regularly applying this salve when my heart grows sick of sermon writing: A group of Christian brothers and sisters have committed to giving their hard-earned dollars so that I can devote my time to being with the Lord in his Word and ministering to their souls. It astounds me to this day. Rather than imprisoning me, this expectation gives me a renewed freedom to “devote [myself] to prayer and to the ministry of the Word” (Acts 6:4).

Though sermon prep heartburn is a hazard of the job, I’ve found a few antacids that alleviate the stress.

I’m learning to be okay with less than my best. I have an achievement-driven personality, so it’s been hard to enter the pulpit on Sunday knowing what I have to preach is subpar. But at this point, I’ve preached plenty of sermons that stink, and I can always count on audible yawns from my kids in the front pew to alert me when it’s happening.

Rather than striving for sensational success, I’ve decided to opt for steadfastness. Early on it felt like the kingdom of heaven hung on the success of every Sunday sermon. But people came back after I bombed. They didn’t come back after I hit a home run. Some Sundays I crawled away embarrassed from the pulpit only to have a congregant shake my hand and say, “One of your best sermons, Pastor.” It became apparent that while I was called to weekly faithfulness, the Spirit of Christ had his own agenda.

My goal these days is to be a man with the right Word for the right moment. My weekly time reading, studying, and preaching verse by verse through God’s Word is a long, slow effort toward that goal. Whether in the pulpit or in a counseling session, whether by the hospital bed or the soccer team bench, I want to be known as a pastor who is “rightly handling the word of truth” (2 Tim. 2:15).

I’ve also had to learn how to dismantle my messiah complex. We never verbalize it this way, but there is a way to do ministry that implicitly says, “I have to do it. And I have to do it perfectly. If I don’t, the church will fail.” No wonder so many of us feel burned out. We are trying to do Jesus’ job for him!

If Jesus tarries, one day I will die. As pastors, we move this truth from the realm of theory to practice when we heed Paul’s instruction to Timothy: “What you have heard from me in the presence of many witnesses entrust to faithful men, who will be able to teach others also” (2 Tim. 2:2, ESV). Begin training your replacements now. One of my greatest joys has been listening with pride as a new preacher steps into the pulpit for the first time.

Sharing teaching and preaching responsibilities with others has provided for longevity in ministry for so many pastors, and I pray it will for me too. Churches that learn the importance of giving their main preaching pastors regular breaks from the pulpit protect them from the weekly stress that can lead to sermon plagiarism or an unhealthy dependence on extrabiblical resources.

Finally, I’m better at this on some weeks than others, but I have to fight to see my time in God’s Word as more than mere work. Shepherds study the Word not ultimately to have a sermon prepared on Sunday but to know the Good Shepherd and to hear his voice. This is why I never really flirt with ministry tools and resources that promise to do all the hard work for me. To outsource my study in the Word is to outsource my relationship with the Shepherd and Overseer of my soul.

I often go for a late Sunday afternoon run after all of the adrenaline of the morning has worn off and the family is still napping around the house. As my feet hit the pavement, I feel like I’m returning to that beach at the end of John’s gospel. I wrestle with a familiar sense of failure and frustration at my own shortcomings, poor word choices, or lack of zeal. In those moments, the question of Jesus echoes in my mind: “Do you love me?” “Yes, Lord; you know that I love you.” And every time, his gentle encouragement to a feeble, wandering, fearful pastor like me is simple: “Feed my lambs. Tend my sheep. Feed my sheep” (John 21:15–17).

This is the activity that cares for the soul of the lowercase “s” shepherd of the church. I know the love of Jesus and demonstrate my love for him in my faulty and feeble efforts to feed his sheep.

Pastor, take heart. Every week presents itself with another opportunity to experience the mercy and grace of our Shepherd. After all, Sunday is a-comin’!

Preaching
Preach a Double-Edged Sermon
The message you prepare for your congregation is also meant for you.
Matthew Barrett
Trending