When beloved congregants turned on me, who could I trust for advice?
Leighton Ford 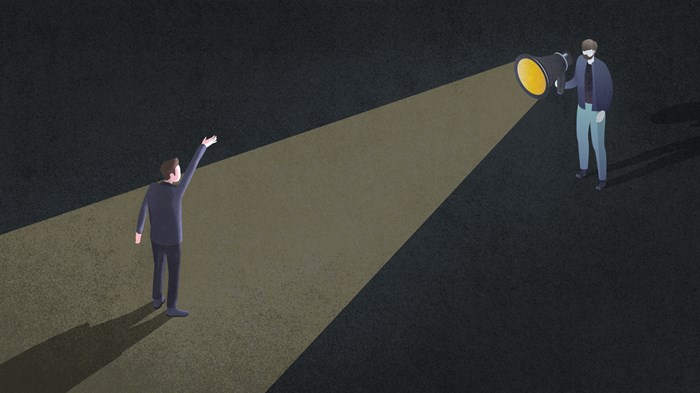 Not too many years ago I got lost in the woods near Linville, a small village high in the North Carolina mountains. I had been the Sunday speaker for summertime worship at the Wee Kirk and stayed over for a day to relax. Midafternoon my dog, Wrangler, and I went for a walk in the woods. I’d walked there before and thought I knew the path pretty well; it wound a short distance around and back to a small lake. But as the sun began to set, it became clear that we were terribly lost.

My cell phone was close to powering down, so I realized I better call for help before the charge was totally gone. So I called the nearby Eseeola Lodge hoping I could reach the manager.

“Where do you think you are?” he asked. “Describe it.” I tried to tell him the best I could.

“I think I know where you are,” he said, then told me to go another direction. Confused in the woods and hills I had been headed 180 degrees wrong.

Relieved, I set off again. Wrangler and I walked for a good 45 minutes along trails I did not recognize. As evening closed in, every minute seemed longer. I was still unsure I was going the right way, but I trusted that someone who knew the woods had set me right. Then came a final turn and I saw a security guard waiting with a pickup to take me back to my car.

Lines in a poem by David Wagoner take me back vividly to that lost afternoon.

You are surely lost. Stand still. The forest knows

Where you are. You must let it find you.

There have been several other seasons in my life in which I found myself feeling lost in a dark wood spiritually and in need of help to find my way back home. Some of these times have come when I have made a wrong turn and deliberately gone in a direction I knew was not for the best. Or when I wasn’t really paying attention to the deepest longings of my heart. Or when some of our efforts faced impossible roadblocks. Or when someone I thought was a friend spoke untruth to and about me. Or when a member of our family was hurt.

But one of the darkest came for my wife, Jeanie, and me at a very crucial time of transition in our ministry. I suddenly found myself questioned and misinterpreted by friends I had long known and trusted. It was a disagreement that could have been prevented. What totally shattered me was an unwillingness to listen and understand.

Behind our house is a schoolyard. In the schoolyard is an iron post that holds a basketball goal. On a cold, black night during this ordeal I walked through that yard trembling with rage and humiliation. I grasped the iron bar with bare hands, shook it, roared into the night and tried to bend and break it. The despair I felt then was about how I could survive and not let my spirit be broken; I knew I could not make it without the help of friends. I was lost in the “dark wood” of a wounded soul. Were there voices that would help?

“What helped you during that dark time?” asked a young leader who knew something of this situation. And I immediately answered, “My friends, my anamcharas.’”

It is a lovely word, anamchara. I love the sound of it. It is the term the ancient Celts used to describe the men and women who were “soul friends” on their life journeys.

It reminds me of that beautiful story of friendship between David and Jonathan, the son of King Saul. Saul, furious with envy at the popularity of his gifted young aide, sought to kill him. David fled and hid in the wilderness. There Jonathan, who loved David as himself, found him and “helped [David] find strength in God” (1 Samuel 23:16).

Before his death Jesus told his followers, “I have called you friends” (John 15:15). After his resurrection he came to two disheartened disciples and opened their eyes to see it was truly him—alive—then and always the friend on their journey.

What a friend we have in Jesus. Yes, and what friends we have in the friends of Jesus. I have relied on these friends in my wilderness times and on my lonely road—friends who believed in and supported me, helped me to find my way again through that dark wood.

What they offered in so many ways will stay with me.

I picture a group of young friends sitting with me by a fire in a mountain home, asking me penetrating questions and then giving me their trust and love. Helpful perspective came from Jim, a psychologist friend who explained how toxic elements often surface during times of transition. People often project their own desires and fears onto their spiritual leaders. If the leader fails their expectations, they turn on them with as much venom as the adoration they lavished before.

During conflict, he says, there is a cognitive dissonance when values clash and power is at stake. Voices become distorted. Those on all sides dig in and are not willing to listen or find it difficult to listen. Motives are misunderstood, and those involved project onto leaders their own needs. Reason shuts down, and emotions rule. We get wrapped in “the fog of war.” The desire for power and control take over. And when those we have trusted let us down, the sense of betrayal is acute.

John, a long-time pastor friend, counseled me by phone. “Leighton, you’re too close to the table. Take a step back. You are too close to the situation to see clearly. You need a larger perspective. Back up from the table until you can take a wider view. Remember this is not your whole story.”

I told a writer friend how my ability to paint seemed to have deserted me. “Leighton,” she said, “those instincts have had to go underground a while to protect some vulnerable parts. Give them time. They will come back.”

Needing some time alone to heal and recover, I went off for a few days to a small cabin I rented in a mountain cove. There I journaled and poured out my soul, the hurts, and the wounds in prayer. One night I turned out all the lights, sat on the floor, and with some music in the background began blindly to draw shapes and contours with a marker on a pad. What I drew that night was no ordinary scene. It was a scrim of emotions, scrabbled lines and circles, a pouring out of the anguish within. And somehow it opened inner doors in my psyche and let the dammed up hurt ebb out.

The next morning there was a downpour of mountain rain. The little cabin was hidden and out of sight. So I stripped down, walked out into the downpour, let it pour over me, through my hair, down my body, gather round my feet. And began to feel the confusion and shame wash away.

These and other anamcharas guided me through and out of my dark wood.

Perhaps most of all—next to Jeanie’s unfailing trust—there was Jack, the Anglican bishop who was a spiritual father to me. During this painful time, I visited him at his home in the south of England. As we sat in his home, I shared the hurt of what had erupted. He recalled that years before when he was treated unjustly, a wise bishop told him that we can lose by winning and win by losing. And he tenderly said to me, “You just need to find a way to let the pain and hurt go. Hold it loosely even if you can’t fix it.”

Hold It, Don’t Fix It

Soon after this dark period I was speaking at a conference in northern England. I went for a walk one afternoon on a country path through the farm fields. As I came back to the gate to our residence, I remembered Jack’s words, picked up a stick, and drew a line on the dirt. I stepped across it, and breathed, “Lord, as best I can, I let go of the hurt, the resentment, the anger. I don’t know if the breach will ever be repaired. But as much as is in me I leave it behind. Help me to do so.”

Now, many years later, I sense no need to fix it. Rather I am grateful for the insights that often come only through the hardest times.

I will not soon again venture alone, without a map, into deep woods I don’t know or without letting someone know where I am going. And I will also seek to remember and pass on lessons I have learned.

What do we do when we lose our way? We can either panic and freeze or stand still and listen for a Voice (and voices) that can tell us where we are and point to where we need to go.

Leighton Ford is president of Leighton Ford Ministries and served for nearly 20 years as chairman of the Lausanne Committee for World Evangelization.