How a cross-cultural experiment with a half-dozen church leaders offered me a fresh perspective.
Paul Taylor 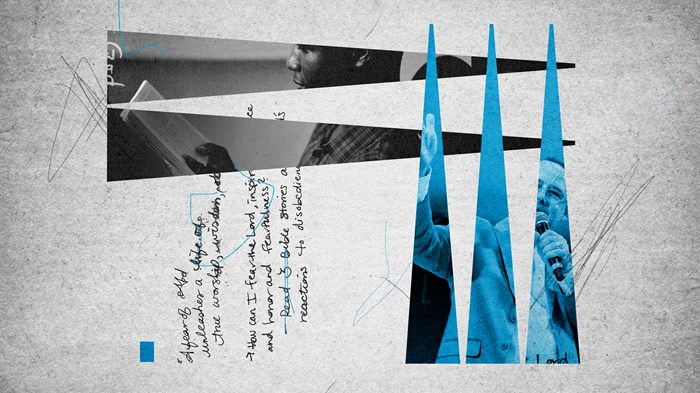 I’m not sure why I suddenly noticed a new angle. Or why I hadn’t seen it in the first place. A few days after my message on the story of Joseph’s accusation by Potiphar’s wife, it occurred to me that the biblical narrative describes an ethnic minority being falsely accused of sexual assault against an ethnic majority. Without a trial or evidence, the man was immediately imprisoned. The application now seemed clear, but I had already preached the sermon.

So last summer, a few of us in the Bay Area set out to change our sermon preparation habits—not just for the goal of collaboration, but also to seek out diverse perspectives. Several pastors from different ethnic backgrounds prepared a sermon series together to preach in their individual churches to address the political division we were seeing in our communities.

The concept of collaborative sermon preparation is not uncommon in multisite churches or online preaching groups, but as I learned, many pastors could benefit from the insights and empathy gained from cross-cultural and even cross-denominational collaboration.

I wrote a six-week series, and a core team of pastors refined it together. Then as a practical display of the topic, several dozen churches across the San Francisco Bay Area preached on unity through a series we called “One Kingdom. Indivisible.”

As an additional challenge, we wondered, could we go one step further and prepare the content collaboratively? Several months later, our church began planning to preach through the Book of Lamentations for Lent. After all the pain and grief of the pandemic, it seemed like an obvious choice: a perfectly timed book of the Bible, multiple tensions in our nation, and a deep relationship among pastors.

We formed a group of six pastors to collaboratively study Lamentations and preach it in our individual churches. We ended up being a diverse group: four men and two women. Two white pastors, two Black, and two Asian American. We each studied one section and taught it to each other. While preaching the book in our churches, several of us invited each other to guest preach as well.

Together, we experienced something powerful. At first, it felt like cheating, much like schoolchildren working on homework together. But studying the text in this way opened up a new encounter with the Scriptures. I would like to share five unexpected blessings from our cross-cultural collaborative sermon preparation.

Studying the Scriptures with pastors from different backgrounds led to new insights. In our initial meeting, we looked at the first chapter of Lamentations. The book’s author compares Jerusalem to a widow, an abandoned lover, a mother, and a prostitute. The two women in our group immediately pointed out the appropriateness of hearing Israel’s lament in the voice of a woman.

“Well of course the women are crying out in anguish,” shared Felicia Larson, a Silicon Valley pastor. “Who else would feel the pain and devastation more than the women who birthed the nation?”

From that first day, it was clear that these colleagues would help me see more than I could have seen on my own. Susan Van Riesen, from Palo Alto Vineyard Church, observed, “What a pleasure it was to meet under the big tent and rediscover the Scripture together.”

Because of COVID-19 restrictions, we met outdoors under a literal tent, but our group represented a theological and cultural big tent as well. We were Methodist, Vineyard, Baptist, and nondenominational. One Black church, one Chinese church, one recent church plant, and two multiethnic churches. The size of our tent led to new depth of insight.

2. Contextualizing to another congregation

The variety of perspectives didn’t only come from the pastors under the tent. We also benefited from hearing the text as our diverse congregants might hear it. When I study, the lives and experiences of the people of my church become a backdrop for application. But reading the text with other pastors enlarged the scope of that backdrop tenfold. I wasn’t just seeing the text through the eyes of my fellow pastor. I was hearing it through the ears of her congregants.

Brian Leong felt a similar way. “To be able to understand how people anticipate the reactions from their own churches was eye-opening to me,” he said. “There are things I could say to my church that another pastor could never say to their church and vice versa.”

But we didn’t have to just imagine preaching to another congregation. Most of us preached (virtually) at each other’s churches. Speaking on the same passage to my church as well as a Chinese American church demanded a new awareness of what was being heard by my listeners.

3. Learning to practice what I preach

The benefits didn’t end with the study group. Our preaching was transformed as well. My people saw me practicing what I preach. Over the past years of facing division in our community and our church, one word has come up repeatedly in my biblical application: listen. Listen to those who think differently than you. Listen to those who come from another background. Listen carefully. Listen nonjudgmentally.

When the people in my church see me listening to other pastors, they witness me demonstrating the very action I’ve been exhorting to them. Collaboration in the community models what we hope for within our own congregations. But listening often grows into friendship. Susan and Felicia both commented on the benefit of having more than one woman on the team, and Susan referenced the friendship that resulted: “To have fellowship and partnership with another woman pastor of color is a very special gift!”

At first, I worried that my church disproportionately reaped the rewards of other perspectives. But when I asked Kaloma Smith from University AME Zion church in Palo Alto what he received, he said, “It’s easy to frame the white evangelical church in a certain way. It’s easy to frame the Asian church in a certain way. But to sit and study and work through a sermon together breaks apart those preconceived notions.”

4. Inviting my people along on the journey

What made this practice particularly powerful was recognizing my own inadequacy. I was not sharing something I had learned long ago. I was inviting my people along on a journey of recognizing what I had missed in the text.

My assignment was to study Lamentations 4. As I interpreted the poem, I saw God’s people being displaced, oppressed, violated, and dejected. Had I been studying Lamentations in my office, I likely would have come up with an abstract or spiritualized application for my mostly upper-class, educated congregation. But while reading alongside brothers and sisters of color, I could not miss the overlap with their very real and concrete experience.

As I preached this passage to my church, I shared not only the new perspective I had come to, but the process of getting to it. No one ever masters seeing the text from new angles.

5. Offering a truer picture of God

The final benefit is the most important of all. If our goal when we preach Scripture is to reveal the glory and majesty of God, then anything that helps us to manifest God more clearly is invaluable. Other perspectives, fresh ears, and the process of growth only matter if they give the people in our churches a truer and fuller picture of God.

In this regard, lament was particularly powerful for all of our churches to experience. Even apart from different perspectives, lament is an underdeveloped muscle of the American evangelical church. As Felicia observed, for a mostly white congregation, it was necessary for lament to “come alive,” whereas for congregations with many people of color, the need might be “permission to lament.”

In the end, we allowed this text to train us in the practice of lament in the varied experiences in our communities. What began as an experiment turned into an opportunity to behold the glory of God and his diverse kingdom as revealed in his Scriptures—contributing to both our sanctification and the spiritual formation of our congregations.

Paul Taylor is a teaching pastor and elder at Peninsula Bible Church in Palo Alto, California.

Join the conversation on Facebook
Tags:
DiversityPastorsPreachingRace and Ethnicity
Posted:July 15, 2021

Preaching
Does Your Preaching Touch Politics?
Four pastors on how, and if, politics should enter the pulpit.
Mark Dever, Adam Hamilton, Joel Hunter, and Efrem Smith
Trending