On December 21, 1968, 40 minutes after leaving Earth’s orbit, Apollo 8 astronauts Frank Borman, Jim Lovell, and Bill Anders fell silent. Looking back at the just-separated third stage of their Saturn V rocket, they’d caught sight of something else.

They had just become the first humans to view their entire planet in one glance. Even today, only 24 people in the entire history of humanity have witnessed that. All saw it between December 1968 and December 1972, the date of the last Apollo mission.

Popular history has relegated Apollo 8’s mission as a footnote, a dress rehearsal for the Big One. Seven months later, Neil Armstrong and Buzz Aldrin would walk on the moon, fulfilling President John F. Kennedy’s 1961 pledge to accomplish that goal by the end of the decade. But Apollo 8 blazed the trail, proving dramatically that humans not only could leave Earth’s orbit, they could fly to the moon, orbit it 10 times, and make it back home safely.

Even Armstrong would write, 30 years later in National Geographic, “Apollo 8 was the spirit of Apollo—leaving the shackles of Earth and being able to return.”

Apollo 8 also meant something bigger. From lunar orbit on December 24, the astronauts encountered a surprise that would change the way humanity looked at itself and its Maker.

Christmas Eve morning, the Apollo 8 Command Module was entering its fourth orbit of the moon. As Flight Commander Borman executed a routine roll, Anders looked out his window and exclaimed, “Oh, my God.”

Hanging in the blackness of space like a bright blue ball was Earth, rising in the sky above the lunar landscape.

Anders’ entire statement at that moment was one to which any vacationer can relate:

“Oh, my God, look at that picture over there! There’s the Earth comin’ up. Wow, is that pretty!”

“Hey, don’t take that. It’s not scheduled,” Borman joked. In all of the preparations for carefully studying and photographing the moon, no one had thought about turning the camera back toward home, 240,000 miles away.

When the Earthrise came into view, the crew’s Hasselblad 500 EL camera was fitted with a Zeiss Sonnar 250mm telephoto lens and loaded with a Kodak 70mm black-and-white film magazine. As Anders—or was it Borman?—shot the first couple of frames, Lovell rummaged through a storage locker to find a color film magazine. The spacecraft continued rolling, and Earth disappeared from the astronauts’ view.

“Well, I think we missed it,” Anders said.

Then it reappeared in the window. With color film now loaded, Anders lined up the shot.

“Wait a minute. Just let me get the right setting here now. Just calm down. Calm down, Lovell.”

Oh, did he have it. Once the film was safely back home and developed, the world realized that Anders’ Earthrise shot might be the most stunning photograph ever taken. He’d already shot images of the whole planet during those early moments away from Earth’s orbit. And an unmanned probe in lunar orbit had photographed the whole planet in low-resolution black-and-white in 1966. But this one was full color, shot by a human from the vantage point of another world.

Lovell later would describe the sight of fragile Earth as “a grand oasis in the vastness of space.” In a New York Times front-page essay, the poet Archibald MacLeish wrote: “To see the earth as it truly is, small and blue and beautiful in that eternal silence where it floats, is to see ourselves as riders on the earth together, brothers on that bright loveliness in the eternal cold—brothers who know now they are truly brothers.”

Anders’ iconic shot would inspire the first Earth Day in 1970, and decades later would be listed first in Life magazine’s “100 Photographs that Changed the World.”

That evening, NASA had planned a live Christmas Eve television broadcast. Borman, Lovell, and Anders were to deliver a greeting from lunar orbit. They’d been instructed by NASA only to “say something appropriate.”

All three had wrestled with what that should be. They wanted something with spiritual meaning, but nothing they came up with seemed to fit the moment. In Genesis: The Story of Apollo 8, Robert Zimmerman describes what happened next. Two weeks before the mission, Borman had called on a friend, Simon Bourgin at the U.S. Information Agency, for help. Bourgin was stymied, too, so he called freelance writer Joe Laitin.

Paging through a Gideon Bible for inspiration, Laitin worked late into the night, typing and then crumpling hundreds of sheets of paper. Finally his wife, Christine, suggested he “begin at the beginning.” Laitin turned to the creation story in Genesis 1 and knew he had it.

He sent a memo to Bourgin, suggesting Genesis 1:1–10 and adding a brief closing line. Bourgin typed the text into a letter to Borman. The astronauts loved the idea. Borman photocopied the letter and added it to the flight plan.

Now, with millions watching from all over Earth, they were on. After short descriptions of what they’d done that day in lunar orbit—incredible enough—they turned to Bourgin’s letter.

Anders went first: “We are now approaching lunar sunrise, and for all the people back on Earth, the crew of Apollo 8 has a message that we would like to send to you.”

And God said, Let the waters under the heavens be gathered together unto one place, and let the dry land appear: and it was so.
And God called the dry land Earth; and the gathering together of the waters called the Seas: and God saw that it was good.

“And from the crew of Apollo 8,” he concluded, “we close with good night, good luck, a merry Christmas, and God bless all of you, all of you on the good Earth.”

Ironically, the space program’s most spiritually powerful image was not about where we went, but where we came from. Coming from the only three humans who had ever seen a God’s-eye view of the entire Earth, the creation story was never more powerful. Human endeavor intersected with the vastness and beauty of creation, and the only appropriate response was to look not at ourselves, but Godward.

Jim Killam is managing editor at Crossfield News and co-author of Go Tell It: How—and Why—to Report God's Stories in Words, Photos, and Videos (Moody, 2014). You can follow him on Twitter @JimKillam.

Awestruck? Watch NASA’s recreation of the Apollo 8 Earthrise moment or read more in Genesis: The Story of Apollo 8 by Robert Zimmerman. 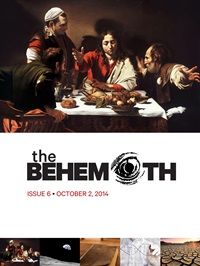