The Dance of Suffering and Love

The recent martyrdom of 21 Egyptian Christians in Libya in late February continues to roll around in my heart. The shock of the early news reports has worn off, and a redemptive news story has emerged: The Bible Society of Egypt is using the event to publish tracts that proclaim the power of Jesus in the midst of such a tragedy. So the grief has been softened. But it hangs on. And it settles in deeper as I read about subsequent events, like ISIS dragging another 100 Christians into captivity.

In a world instantly connected, where all manner of tragedies flash before our eyes every day—well, what are we supposed to do with the ever-deepening grief? And what can we possibly do about the events that prompt it?

We feel helpless. The temptation is to drown it out with entertainment or hobbies or more frenetic work, maybe even church work. Or to simply not read the news. Or a hundred other creative solutions. For the sake of our sanity, we need to retreat to these shelters now and then. Yet we want to do more than escape.

As I ponder this, I find myself increasingly trying to fathom the mystery of love. Precisely because love is a mystery, and a divine mystery at that, we will never be able to completely fathom it. But we can understand at least this much: that there is no love without suffering, that we never learn to love until we learn to suffer. We may not be able to fathom why love and suffering embrace, but that it is written into the fabric of existence—that much is clear.

And because of the dance of love and suffering, we can move into grief with reverent awe, knowing we are participating in the very life blood of God.

As Holy Week approaches, we read once again about the divine marriage of love and suffering. God is a creative fellow, and he could very well have shown his love to us in all sorts of ways. But in his infinite wisdom and compassion, he chose to demonstrate his love by suffering and dying for sinners. Some reply that he had to do this to satisfy his justice. Yes and no. God is not subject to some law that stands outside of himself. Otherwise, the creator of a law that would bind God would be the supreme God of the universe, instead of the God who died for us. No, God created the universe and its various and sundry laws. He chose to create a world in which sin would be redeemed by blood. He made it that way. And when it came time to play by those rules, he did so.

This is a biblical truth that makes itself felt every day. A husband and wife tie the knot at a blissful ceremony, but we remind them that every better will be followed by a worse. And that the worse is part and parcel of the better. What is not said in the vows is shouted in the marriage: the better days are enriched by the worse days.

The worse days are those days when we lose patience with one another. When we rush together to the emergency room with a toddler daughter who has swallowed a bottle of allergy pills. When we lose sleep because we’re unsure of how we’re going to pay the mortgage. When we pray together as our son heads into surgery. When we survive a car accident that, looking at the state of the car, makes us wonder why we are still alive. When we attend the funerals of each other’s parents. When we help each other get out of the chair because we are too feeble to do it ourselves.

Yes, we have fond memories of the honeymoon, and our first Christmas as a family, and the anniversary trip to Costa Rica, and the family reunion in California. But those blessed moments are deepened by the suffering we’ve endured together. Suffering waters love.

As I said, I don’t know why suffering and love dance together like this. But they do.

This brings me back to the 21 martyrs, and the other tragedies that roll over us every week. I’ve decided that I must not retreat too often into pastimes that help me forget them. I’m finite and weak, so I have to do this now and then to keep my sanity. But I also need to sometimes read those news stories word for word, and watch the videos all the way through, and let myself grieve and even cry. Because that is when love—not unlike the love of our God—is being formed in me.

And when love is formed in me from suffering, I’m finally able to respond faithfully. After reading such stories, I’m tempted to numb the grief by immediately sending a donation or sending up a prayer. I know it’s not driven by real love when I never think or do anything about this tragedy again. It’s knee-jerk compassion; it isn’t love.

And so love can rise. What that love looks like is hard to say. It might show itself in steady giving and prayer. Or in joining fellow loving sufferers in a group effort. Or maybe even sojourning to the land where the suffering occurs. Who knows what love will look like, except that it will take on the color of quiet joy and unshakable hope.

As I said, this is a mystery I do not fathom. But it is a mystery before which I gape in awe. And as God gives me strength, I step into the dance whose motions, at least for now, sustain our beings.

Mark Galli is editor of Christianity Today and co-editor of The Behemoth. 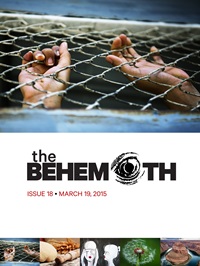