Why I Thank God for Hurricanes

The ocean was beckoning and beautiful as we drove east along Beach Boulevard in Biloxi, Mississippi. The world seemed bright—so long as you kept your eyes looking right.

Looking to the left, or ahead, or behind, to the small city occupying this stretch of land between the open Gulf of Mexico and a narrow river bay called Mullet Lake, the world was devastated.

In the 90 days since Hurricane Katrina, recovery had barely begun. At landfall, the storm covered the eastern half of the Gulf all the way to the tip of the Yucatan Peninsula. And Biloxi was one of the hardest-hit cities. Wind gusts reaching 90 mph pummeled the area for over 17 hours as the storm surge pushed a 28-foot wall of water landward from the shore and through the inlet to the bay.

It left behind stately homes, churches, and businesses, all in ruins. As we drove through, a hand-painted sign on tattered plywood rechristened the parkway: “Boulevard of Broken Dreams.”

We came to an area where all the buildings had been scraped off their foundations for blocks and blocks. The thrashing winds and rushing storm surge would have been bad enough. Here, a casino barge the size of a container ship had broken from its moorings and, riding the surge, flattened all of those properties like a giant rolling pin. A Vietnamese immigrant fisherman we met in another neighborhood told us about surviving the storm with his family in his boat on the bay. He nearly lost his life tending to loose lines on the violently shifting deck. He saw people drown.

There is a time for everything, and a season for every activity. My conversation with the fisherman was a time to listen. My time in Biloxi was a time to help plan for the recovery. Maybe now, more than ten years after Katrina, in the cold of winter, far from Atlantic hurricane season, I can tell you something that is often best unsaid.

Hurricanes have silver linings, too. The world needs hurricanes.

First consider the global heat budget. The tropics absorb more solar energy than they reflect back into space. At the poles, it’s the opposite: they lose more heat than they absorb. Ocean currents and wind belts, aided by hurricanes, transfer excess tropical heat to the poles. Otherwise, we’d have far more extreme temperature differences across the planet.

Wherever the upper 200 feet of seawater in the tropical oceans exceeds 80°F, accelerated evaporation feeds massive rain clouds that swirl into the vortex of a hurricane. (At least that’s what we call them in the Atlantic. They’re cyclones or typhoons in other oceans.) Evaporation cools the ocean surface (quick science demonstration: lick your wrist and blow on it). The energy released by a strong hurricane in a single day is about 70 times greater than all human energy consumption in a full year!

Hurricanes also cool surface seawater locally by as much as 9°F by mixing up colder, deeper water. When seawater gets too warm, corals turn white. That’s not a good thing—it means they’ve lost the algae they need to thrive. In 2005, a massive coral bleaching event struck reefs between Florida and the Virgin Islands. The US lost half of its Caribbean coral reefs in a single year. But reefs that were crossed by hurricanes suffered less bleaching and experienced more rapid recovery than other reefs in the region. Even though violent waves can break up and topple coral on the reef, scattered coral fragments can provide the nucleus for new reef growth. Storm waves can also scrub corals clean of choking algal overgrowth or uncover buried oyster reefs.

But life on land depends on hurricanes, too. Hurricanes provide about 15 percent of the rainfall along the Gulf of Mexico coastal region. It’s even higher in the western Pacific, Southeast Asia, and India, where cyclones make up more than 25 percent of the annual rainfall. A drought in 2012 was so bad that barges on the Mississippi River were dragging the channel bottom. Rainfall from Hurricane Isaac in August 2012 provided at least temporary relief to the region. Without hurricanes, there would be a lot less freshwater on the land.

Meanwhile, rivers carry nutrients washed from the land into wetlands, estuaries, and bays, and offshore. That’s why fish populations increase after storms, even hurricanes.

Of course, while ecosystems benefit from hurricanes even if they’re hundreds of miles from the sea, it’s coastal landscapes—especially barrier island systems—that are most affected. There is a dance on the beach: Strong storms erode the beachfront and scour new tidal inlets. Then normal wave activity returns lost sand to the beach over a period of years to decades. Then come the storms again. High waves riding the storm surge push sand from dune ridges back into the lagoon between the barrier island and the mainland.

This activity builds mudflats that create new habitats for plants and animals. Hurricanes rip up seagrass beds in bays and lagoons and roll them onto the shore like soggy carpet. These natural seawalls (called debris dams) help to impound freshwater in coastal wetlands and keep saltwater out.

Friend of the pioneer

You can’t keep species diversity and a healthy ecosystem without the occasional extreme event. It’s as true for coastlines and hurricanes as it is for wildfires in forests. As the late biologist Seth Reice described in The Silver Lining: The Benefits of Natural Disasters, species diversity drops over time as “winning” species displace losers. A sudden disturbance like a fire or a hurricane kills off a proportion of the climax species, letting pioneer species exploit and live in the disturbed areas. Ecologists have discovered that most communities owe their makeup to the most recent disturbance. For example, the piping plover and other birds along the Mid-Atlantic coast require open, sandy stretches of beach for nesting—so they need the occasional hurricane to pass through to give them their space.

Likewise, mangrove trees that line the Everglades coast and Caribbean islands serve to protect the shoreline from erosion during storms. That’s great. But hurricanes keep mangrove forests from becoming so successful that there’s no space for buttonwood forests or black rush meadows. And the mangroves themselves experience higher long-term net productivity.

The good news of hurricanes on natural coastal environments is complicated by human development. Building along coastlines tends to fragment or destroy habitats. Recovery after these major storms becomes more difficult for plant and animal species. Some may even go extinct. Others will be crowded out by new invasive species.

But it’s not an issue of humans vs. hurricanes. Hurricanes can help us, too. There is one remarkable “silver lining” from Katrina that shows how that hurricane—followed by Rita a month later—literally cleaned up our mess. Like other urban environments, New Orleans was plagued with toxic levels of lead in the soil, which contributed to elevated lead levels in the air and in children’s blood. But the 2005 flooding across the city reduced the soil lead levels by 46 percent on average. Tests on over 13,000 children after the storms revealed that their blood lead levels had decreased by 33 percent.

I’m driving back down Beach Boulevard—this time not in person, but through Google Street View. Properties look better than they did, but it’s surprising how many remain empty after the rubble was cleared. Last year’s ubiquitous anniversary stories noted soberly that the community has changed. Biloxi will never be the same as it was before the storm. But human response to the storm reflects its own kind of disturbance ecology. As it does for the buttonwood and the piping plover elsewhere, the open space in Biloxi provides opportunity for innovation and new life in a beautiful place.

Stephen O. Moshier is professor of geology at Wheaton College, where he teaches a course for nonmajors on natural disasters. 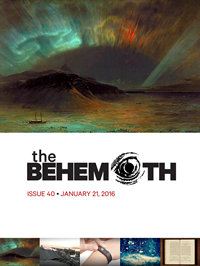