Why Solar Power Might Get a Lot More Green

Plants are exceptional friends. They live their whole lives giving, and ask for very little in return.

Plants provide us with nourishment in the form of fruits and vegetables; they offer us a means of creating shelter by giving us lumber; they keep us warm in the winter by fueling our fires. Even the spent air exhaled from our lungs is made useful and oxygen-rich again by our generous green comrades. Plants can meet all of our physical needs and wants, and all they desire in return is a little water, some sunlight, and a few nutrients.

With all that plants already provide us, you would think they would have nothing left to give. This doesn’t seem to be the case, however.

Spiderman taught us that with great power comes great responsibility. Popeye taught us that great power comes from spinach. Led by this insight, a group of researchers at the University of Georgia set out to see just how much power could be obtained from this leafy green. But they weren’t looking to make their biceps expand. They were more interested in how much electrical energy they could get directly from the plant’s photosynthetic cells. In essence, they used spinach like living solar panels.

A quick reminder about photosynthesis: it is the process of converting light energy into chemical energy and storing that chemical energy in the form of sugar. Or, in other words, of turning sunlight into food. It happens inside the cell on the membranes of pancake-like structures called thylakoids, which contain green pigments called chlorophylls.

And that’s exactly what the UGA scientists did.

The researchers started by removing thylakoids from spinach cells and attaching them to carbon nanotubes, thin carbon cylinders that are 50,000 times finer than human hair. Because photosynthesis occurs on the membrane of the thylakoids, the carbon nanotubes were in direct contact with the proteins that transport the electrons. So, instead of moving across the thylakoid membrane as usual, many of the electrons moved directly into the carbon nanotubes, generating an electric current collected by an electrode. The wattage produced wasn’t comparable to the amount of energy we can produce using solar panels or fossil fuels, but it’s a long way from that potato clock kit you built in junior high. Charging your cellphone with a succulent may not be out of the question.

Solar energy is the most abundant and sustainable form of energy available to us, and plants are the most efficient utilizers of solar energy on the planet. Plants operate at nearly 100 percent quantum efficiency, which means the number of photons absorbed by the plant is equal to the number of free electrons released within the plant. The average modern solar panel is only about 15 percent efficient.

But plants don’t produce as much usable electricity as solar panels because of how they each move their excited electrons. Solar panels are made to generate electrical energy; plants store chemical energy. So instead of readily releasing electrons, the proteins on the thylakoid membranes want to keep them. They want that energy for food. But with recent advances in genetics and bioengineering, we can manipulate plant genomes much more easily. We’re likely to change thylakoids to improve their ability to let go of their free electrons. If we do, that kind of organism could generate as much or more energy than modern solar panels.

Consider how much cheaper and easier it would be to create and maintain energy plants than solar panels. Conceivably, an acre of corn could be grown and maintained by one person for the cost of the seed, water, fertilizer, and basic equipment. On the other hand, solar panels often cost millions of dollars per acre and have to be maintained by specially trained technicians. And solar panels can’t reproduce. This gives plants an edge on the sustainability front.

So shifting from fossil fuels to plant-based solar energy would help to stop the changes to Earth’s atmosphere. But more than that, it would also remedy much of the damage that has already occurred, as the plants leech carbon dioxide and replace it with fresh oxygen. The generosity of creation continues to astound us. We repeatedly find that the Creator has met all of our physical needs from the start. Even needs we couldn’t have anticipated, like clean energy and environmental remediation, have been provided for. This sort of grace and openhandedness is truly something for us to ponder and to mirror. Were we to view things like plants as another physical sign of God’s love, then we would be made better by the example they set forth.

They are the provision of God, yes, but they are also the voice and the favor of God. The ability to discern God’s character in creation has been given to us all, and Psalm 19 says creation “proclaims his handiwork.” So if we listen, we may know the heart of God, and if we search, we may discover his charity.

Seth Ratliff is a hiker and writer living in Bristol, Virginia. He wrote about farming Mars for The Behemoth’s issue 33. 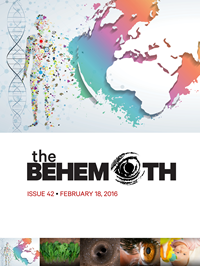