What Dreams Are Really Made Of

“All men whilst they are awake are in one common world: but each of them, when he is asleep, is in a world of his own.” —Plutarch, Of Superstition, attributed to Heraclitus

A bell rings. I find myself wandering through the vaguely familiar halls of my old high school building. As I walk through crowds of kids scattering into classrooms, I revert to my 17-year-old self. I’m a student again. The others know exactly where to go, but I’m lost. Hallways branch out in every direction, with stairs leading to more levels. Why can’t I remember where my math class is held? If I don’t find it in time, I’ll miss the final exam. I realize I have no memory of the classroom because I’ve skipped math every day since the semester began. Why would I do that? Now if I don’t ace this test, I’ll fail. I don’t have long to fret before my teeth start falling out of my mouth, dropping to the floor one by one. Just then, the buzz of my alarm jerks me awake. I was only dreaming.

Dreams transport our consciousness to other worlds and present us with strange, often nonsensical, experiences and emotions. Elements from our recent past jumble together with people and places we haven’t thought about in years. When we awaken, the contents of our dreams evaporate from our memories. Dreams are a magnificent paradox, so familiar to the human experience, yet ephemeral and disconnected from our waking lives.

Events and imagery that would perplex or disturb a waking individual seem normal in a dream. Objects transform into other objects, settings change at random, and people are composites of multiple real-world individuals. Except in rare cases of lucidity, dreamers accept this dream logic without question, unaware they are dreaming. Isaiah captures the transience of dreaming and the dissonance of waking in the following analogy: “As when a hungry person dreams of eating, but awakens hungry still; as when a thirsty person dreams of drinking, but awakens faint and thirsty still. So will it be with the hordes of all the nations that fight against Mount Zion” (Isa. 29:8).

In ancient China, one common view of dreams suggested that, while a person slept, a part of his or her soul (the Hun) left the body to journey in the spirit realms. This would account for the seemingly authentic experience of dreams. Yet even at that time, some sought naturalistic explanations for these phenomena. Wang Chong of the Han dynasty questioned the consensus view: “The meaning of dreams is dubious. Some say that dreams are [caused by] the subtle spirit which lingers by itself in the body, thus producing good and evil signs. Others say that the subtle spirit acts and intermingles with people and things.” He argued that, since the people one encountered in a dream would have no memory of the meeting, the dream experience could not be authentic, but only an illusion. His argument anticipated with remarkable foresight the path dream analysis would take.

Today, thanks to EEG (electroencephalographic) monitoring, we know dreams occur primarily during the REM (rapid eye movement) cycle of sleep. REM sleep happens four to six times a night, and during these cycles, a sleeper’s brain activity appears almost awake. In fact, the brain uses more energy during REM sleep than when solving complex math problems. Yet sleepers are more difficult to wake from REM than non-REM sleep.

During the REM cycle, the brainstem blocks motor commands so nothing happening in the motor cortex results in physical activity, like a temporarily useless keyboard during a system update. Except for respiratory and eye muscles, a dreamer’s entire body is immobilized. William C. Dement, a pioneering sleep researcher, calls REM sleep “an active, hallucinating brain in a paralyzed body.”

This property of dreaming may seem counterintuitive, even unsettling. We imagine that, when a sleeping dog snarls and gyrates its legs, it dreams of chasing squirrels. Actors toss and turn in a tangle of sheets when their characters have nightmares. The idea of nighttime paralysis, on the other hand, leaves us feeling vulnerable, exposed to unseen threats with no defense.

But REM paralysis actually guards us against threats—not external, but from ourselves. Our brains struggle to distinguish dreams from reality. REM paralysis keeps us from acting out our dreams, protecting others and ourselves. In rare cases, dreamers suffer from a condition known as REM sleep behavior disorder. These people lack typical REM paralysis and act out their dreams. One man dreamed he was playing football and tackled his dresser. Another believed he was protecting his wife from an assailant, but woke to discover he was attacking her instead. When REM paralysis functions as it should, our dreams stay in our heads.

Between 90 and 95 percent of people awakened during or after REM sleep report dreams. Even those who claim never to dream will, when roused from REM, recall a dream over 80 percent of the time. Bastien Herlin and his colleagues from the ICM Brain and Spine Institute in France studied 289 participants suffering from REM sleep behavior disorder. Some of these people claimed not to have dreamed in over 10 years; a few said never. However, due to their condition, all participants—even those who never recalled dreaming—showed physical activity during REM sleep, including “arguing, fighting, and speaking.” Herlin and his colleagues concluded, “Dreaming production is universal, while dreaming recall is variable.”

Whose Dream Is It, Really?

If dreams are nearly universal to the human experience, they must serve an important function. People have sought to illuminate the purpose of dreams across time and cultures, using whatever analytical tools were available to them. It’s no coincidence that the first recorded dream is more than a description; it is paired with an interpretation. In the Epic of Gilgamesh, the eponymous character experiences a nightmare of misfortune and helplessness, which his mother later interprets. She analyzes the images from Gilgamesh’s dream as symbols and metaphors revealing information about future dangers and opportunities.

Dreams appear frequently in the Bible, and most are ascribed to divine revelation. In Genesis 41, Joseph is asked to interpret a series of dreams plaguing the Egyptian Pharaoh. Where magicians and wise men failed to guess their purpose, Joseph recognizes Pharaoh’s dreams as a prophetic message from God, encoded in a layer of symbolism for Joseph to decipher with God’s direction. Pharaoh raises Joseph to a position of authority, and entire nations are blessed by the correct interpretation of these dreams.

During the 16th century Protestant Reformation, Martin Luther took a more skeptical view of dreams than many of his contemporaries. He suggested that most dreams were not from God but from Satan. In his commentary on Genesis 42:38, Luther called dreams “deceptions” and “empty visions.” His students remember him saying, “Satan plagues and torments people all manner of ways. Some he affrights in their sleep, with heavy dreams and visions, so that the whole body sweats in anguish of heart.”

We shouldn’t be surprised that Luther took such a skeptical view of dreams. After all, 80 percent of dreams include negative emotions: anxiety, fear, and grief. These nightmares torment dreamers with visions of relentless pursuers, humiliating rejections, and Sisyphean tasks of endless failure. Henry Fuceli captures this darker side of dreaming in The Nightmare, a painting reminiscent of Luther’s dream analysis. The Nightmare depicts a helpless dreamer beset by a demonic oppressor, an incubus sitting on her chest at night.

A print of Fuceli’s The Nightmare hung next to Rembrandt’s The Anatomy Lesson on the wall of an apartment in Vienna belonging to perhaps the most recognizable dream analyst: Sigmund Freud. The founder of psychoanalysis, Freud sought a psychological function for dreaming, rejecting the spiritual interpretations that had dominated dream analysis for centuries. Although he saw himself as a successor of the biblical Joseph, he wished to distance himself from the method of dream interpretation Joseph represented. Dreams, Freud believed, did not predict the future; they exposed the past.

In The Interpretation of Dreams, Freud called dreams “the royal road to the unconscious.” He believed they were primarily outlets for wish fulfillment, allowing dreamers to entertain sexual or aggressive whims. Quoting Plato, Freud summarized his theory in this way: “The virtuous man contents himself with dreaming that which the wicked man does in actual life.” These forbidden fantasies were, according to Freud, almost always encoded within a layer of symbolism. A trained psychoanalyst, by sifting through the allegorical imagery, could learn about trauma from a person’s past and heal them from neuroses in the present.

Recent theories of dreaming have little to do with Freud’s psychological interpretations. They take a biological approach. Dreams may provide sleeping brains with periodic stimulation, helping to preserve and develop neural pathways. According to Harvard University’s Alan Hobson and Robert McCarley, dreams might be the result of these random discharges as the brain tries to make sense of neural static. The cerebral cortex attempts to synthesize the disparate memories and sensory information into a sensible story or experience. Unfortunately, this theory doesn’t account for the fluidity of some dream experiences or the recurrence of certain dreams night after night.

Studies show that dreaming, or at least REM sleep, may be important for memory processing. Participants deprived of REM sleep remembered less information in the morning than those deprived of non-REM sleep. And EEGs show that parts of the brain that activate when learning a new task activate again that night during REM cycles. REM sleep, and possibly dreaming, help convert memories into long-term learning.

Dreams are likely a product of the natural cycles of our brains, carefully regulated to keep us safe, and associated with important brain functions such as memory consolidation. Yet it turns out, these mysterious phenomena are quite commonplace, occurring multiple times a night for nearly every person on Earth. What, then, are we to do with biblical stories of God reaching through dreams to reveal himself and his will? Perhaps—as with bread, wine, and water—God occasionally gives something ordinary, something meant for regular nourishment and wellbeing, a new role and significance. Dreams are a sign of God’s provision, both everyday and supernatural.

Kyle Rohane is editor at LeaderTreks in Carol Stream, Illinois. He wrote on synaptic pruning for The Behemoth’s Issue 39. 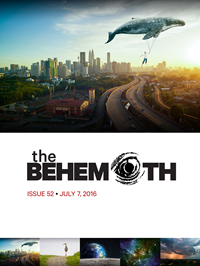