He makes winds his messengers,
flames of fire his servants. –Psalm 104:4

The Fort McMurray fire seared its way across Alberta and Saskatchewan, Canada, in early summer 2016, dominating the news cycles. A dry winter had left little snowpack, while low humidity and high temperatures set the stage for the dramatic events. Beginning May 1, 2016, this giant fire forced the evacuation of 88,000 people and covered more than 1.5 million acres before it was declared “under control” on July 5. Just after that fire was coming under control, wildfires erupted near Los Angeles, California, that have lasted for weeks.

The Fort McMurray fire was the most expensive disaster in Canadian history. In terms of burned acreage, it was about the same as the worst recorded wildfire in North American history. But the only deaths reported were those of two teens whose SUV crashed into a logging truck during the evacuation. The Peshtigo fire, which started the same day as the Great Chicago Fire, offered little escape.

In the fall of 1871, a heat wave baked the prairie states. Grasses dried, soil cracked, trees stressed and died in an ongoing drought. No air conditioners came to the rescue. No frozen drinks and cool movie theaters abated the heat. The central United States waited for relief. People and animals alike took whatever cooling they could get. On October 8, the great heat on the plains generated massive winds. Thunderstorms formed. Here and there, fires from lightning or human activity caught the vegetation like tinder. Crown fires broke out in woodlands. Grass fires, renowned for their velocity, sped across the prairie land.

This prairie fire spread across the landscape, driven by massive fronts of moving air. It raced across prairies, through forests, and up hills; it slowed going downhill, but even creeks and rivers did not stop it. In Wisconsin and the upper peninsula of Michigan, this fire and others spread across the landscape. Vast billows of smoke rose, choking the life of anything breathing. Animals fled before it. Humans saw the fires in the distance and rushed away if they could do so. Others leapt into wells, ponds, and rivers to survive.

In the end, the Peshtigo fire killed between 1,500 and 2,400 people, and covered 2,400 square miles (1.5 million acres). Half of the population of the small town of Peshtigo died, trapped in the Wisconsin village’s wooden buildings, on its timber sidewalks, and in its sawdust-covered streets. In the town alone, about 800 died—more than three times the casualties of the more famous Chicago fire.

From the Peshtigo fire of 1871 to the fires raging in California this summer, the power of wildfires can be hard to imagine. The heat can be so intense and the winds so fierce that fire whirls form. These towering fire pillars swirl with the manic power of tornadoes, fueled by gases from the vegetation consumed below. Sometimes the temperature of these intense, terrifying fires can reach 2,000 degrees Fahrenheit.

Fire is so elemental that it connects with our instincts of both fear and fascination. The same fire that can terrify us—suck the air out of our lungs, destroy cities, cloud the skies with smoke seen for thousands of miles, alter the weather, and kill—can also cook food, kill diseases, warm our bodies, melt metals, light our homes. The same fire that can represent the terrifying presence of God in a bush, can lead his people on a journey in the wilderness. In the created world, fire can also reset an ecosystem, clear out vegetation, open new habitats, and add nutrients to the soil.

Humans have a mixed relationship with fire. Uncomfortable with the destruction, we feel impatient for the beauty that comes from ashes. We speak of wildfires as natural disasters. But humans are central to both their suppression and their creation. In the US, about 95 percent of annual western wildfires are started by humans. Their extent is often determined by how we’ve managed past fires, and whether we’ve allowed them to burn. The huge fires that ravaged Yellowstone National Park in 1988 illustrate our predicament. For decades, we’d managed fires by suppressing them as early as we could. But that meant piles of dry leaves and dead wood accumulated on the forest floor. A drought and a scorching heat wave set the stage for the 1988 fires to spread out of control. Afterward, land managers concluded that fire suppression is unnatural and counterproductive, and began letting a number of naturally produced wildfires burn. (Fire suppression is still the norm for areas with significant human habitation, though these areas now often also include controlled burns.)

The story of Yellowstone’s Great Fire did not end with dead trees as far as the eye could see, however. Even after the fire raced across more than 700,000 acres of forest in Yellowstone and the land lay studded by blackened snags, new fireweed grew from the charred soil, grasses sprang from surviving scattered clumps, and alders, aspen and small conifers came slowly back. Succession restarted, as communities of plants arose from the ashes.

In fact, some species thrive in such a newly scarred landscape. They spring into gaps made by other species temporarily displaced, or even survive and encourage the fire. Prairie grasses with their deep root systems produce dead stems and leaves each year. This plant material burns quickly above the soil, while below roots may extend several feet in a vast network that protects from erosion and will allow the plants to spring back to life when the fire is past. The burr oaks of savannah systems in the US and the baobab trees of the African savannah both have unique adaptations such as corky bark and thick roots to survive fires that would kill other trees.

The chaparral system of California represents a fire-adapted system. Dominated by shrubs such as mesquite, sagebrush, and ceanothus (California lilacs), chaparral burns easily in the dry climate. The resinous pitch of some species of ceanothus, for example, promotes fire, while its tough roots prepare to re-sprout as soon as the fierce blaze is past. The heat from the fire promotes seed germination and the flames burn away competitors. Sagebrush has resinous foliage and often resprouts from roots after flames rush by. In other fire-adapted plants, such as jack pines, tough cones only open and release their seeds after exposure to fire. Such breakdown and renewal is built into the natural systems of creation.

Those systems are changing. Fires are increasing, not just in California and the dry west, but globally. In Indonesia, for example, changing climate, slash-and-burn forest clearing, and other factors led to more than 122,000 fires last year, choking much of Asia.

Just as we learned after Peshtigo and after Yellowstone, we’re trying to learn from Fort McMurray. We have to live with the dual nature of the dangerous, untamed, and glorious force of wildfire.

Dorothy Boorse is professor of biology at Gordon College. She wrote on whale falls for issue 34 of The Behemoth. 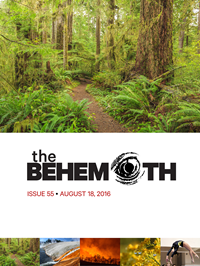