The largest living creature on Earth doesn’t breathe. It has no limbs. If you walked by, you might not even know you were in the presence of a gargantuan living being. Perhaps, however, if you believed in European folklore, you might imagine a pattern to the mushrooms growing at the base of trees and wonder if you had wandered into a giant fairy story.

The largest organism in the world is a huge, old fungus of the species Armillaria ostoyae in eastern Oregon’s Malheur National Forest. This fungus produces edible “honey mushrooms,” nicknamed after their color. It is also parasitic on the roots of several tree species, producing a disease called Armillaria root disease.

The world’s largest individual creature was discovered by people trying to solve a mystery. Because it is found in a large area of forest, any pattern to the mushrooms was undetectable. Instead, scientists had observed another pattern in several large patches of dead trees. In each patch, the trees had died of a fungal infection. The trees that were dead the longest were in the center. Closer to the edge were trees that had not been dead as long. At the edge were trees that were partially diseased. In a ring outside the ill trees were healthy trees. The scientists wondered what had caused this pattern.

To answer this mystery, the group looked at DNA. The researchers found that fungal cells in infected trees were genetically identical throughout the largest patch, which meant that the samples came from one giant, largely invisible being, or one “genet.” The other local patches were similar—each represented an individual organism of great size. Over a long period of time, the individual fungus in each patch had spread from an original point throughout the soil, up and under tree bark, into the wood of the trees, and on to more soil and more trees over an increasingly wide-spread area.

The largest genet (Genet D, called the “Humungous Fungus”) is impressive. It is estimated to be between 1,900 and 8,650 years old. This fungus is more than 2.4 miles (3.8 km) across, inhabiting 2,385 acres (965 hectares) of soil. To picture that: It covers more than 1,600 football fields. Estimates of the biomass of Genet D are 7,567 to 35,000 tons of fungal structures throughout the soil and throughout and on tree bodies, making it the largest known organism by mass as well.

This organism has quietly lived in an area of mixed habitats in a national forest in the Blue Mountains that is itself more than 1.7 million acres in size. The large individual, and at least four others found in the same area of the forest, represent only a small extent of the total protected region. Over the ages, such fungal individuals have come and gone, while the surrounding landscape has flickered with a dynamic mosaic of ecosystems—shrubby sage lands, coniferous forest, alpine lakes and meadows.

On a smaller scale, people often observe a related phenomenon: rings of mushrooms called “fairy rings.” Legends from many countries suggest that small circular groups of mushrooms were caused by the dancing, frolicking, or mischief of fairies. On moonlit nights, some stories hold, the dancing of fairies could enthrall the unsuspecting and lure them into a circle from which they might not escape. Other old European traditions have suggested fairy rings are caused by dragons or witches. Fairy rings were almost always viewed as places of danger and mystery, where passersby should fear to tread.

Such fairy rings are similar to the giant Malheur National Forest fungus—the mushrooms are all connected underneath and within the ring by the network of threads called hyphae that constitute the bulk of the fungal organism. The mushrooms are the outer, and only visible, reaches of an organism with the diameter of the fairy ring. Many fungi periodically produce such mushrooms—visible above-ground portions of the much larger organism. (In huge organisms like Genet D, mushrooms may appear in clumps, not in a clearly discernable ring.) Often these mushrooms are only present for a rainy period of the year, when the mushroom caps develop and release spores. If you have ever looked underneath mushroom caps, you may have seen slitlike gills—a place where spores are held and from which they are released.

Until 1998, no one knew Genet D was a single individual because so much of its body is hidden. Such stealth living is typical of large fungi. If you could separate them from the soil and wood they live in, the myriad of hyphae might look like the threads of a cotton ball. These form a mesh in the soil, taking up nutrients. All the hyphal threads together form the main body or mycelium.

The Armillaria fungi also have more robust rootlike structures, called rhizomorphs, which look like shoestrings and give the genus the nickname “shoestring fungus.” Rhizomorphs grow through the soil and help the fungus invade new areas. Just like your body has different parts, the fungal individual has the hyphae (forming the mycelium), the rhizomorphs, and the mushrooms.

But unlike your body, it doesn’t have a central control system, a lifespan, or a typical size and shape. There is no heart for fungi. No brain. No childhood. Unless something like a forest fire hot enough to kill soil organisms intervenes, this giant being can just continue to grow indefinitely.

Fairy rings are places of mystery and danger. In our modern world, which views such stories as superstitious, a “fairy ring” is no less unsettling and mysterious: How does one fungus produce both a tree-killing illness and a delicious food? Are they the leftovers of a night of fancy and frolic, or agents of decay and signs of our own mortality?

Because we want trees for fuel and wood products, it is tempting to revile a wood-consuming creature. Fortunately for the trees in the national forest, the fungi represent only a small part of the whole habitat and kill relatively few trees.

More importantly, though, fungi—including this species of fungus—play critical roles in ecosystems. In this case, Armillaria fungi also break down dead plant material in the soil. If decomposers did not do so, nutrients would be trapped in the dead bodies of plants and animals. Piles of detritus would form, and trees, saved from death by disease, would nonetheless die from lack of nutrients. If the cycle of tree death and breakdown were suspended, openings would not appear in the forest for new seedlings to shoot up. Life would grind to a halt if we had no way to phase out the old and let in the new. Decomposers also provide food for many soil organisms and bind soil together, slowing erosion and holding water.

Other species of fungi have even more extensive soil roles. Some fungi bind tightly to the roots of plants, increasing plant absorption of nutrients and even helping plants to fight infections. There is something meek about such service, toiling through snow and heat, droughts and fires and blizzards, slowly re-apportioning the nutrients back to the very plants that themselves shade and hold the soil, and provide food in turn for animals.

The “Humungous Fungus” began life as a microscopic spore and grew undetected, dwarfing generations of giants like blue whales and conifers as they were born, lived, and died. While it’s not the work of fairies, the stealth behemoth is a testimony to the quiet, unassuming mysteries that hold our world together.

Dorothy Boorse is professor of biology at Gordon College. She wrote on whale falls for issue 34 of The Behemoth and on wildfire for issue 55. 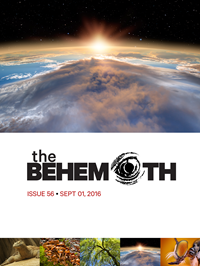