“It would be truly a work of divine providence if, during this pious pilgrimage of Paul VI, all the heads of the churches of the East and West could meet in the Holy City of Zion. There in common fervent prayer and in the spiritual recollection of the Christian spirit, on their knees, tears in their eyes, and in a spirit of unity, on Golgotha which was wet with the most holy blood of Christ and before the Sepulcher whence sprang reconciliation and forgiveness, they could, for the glory of the holy name of Christ and for the profit of all humanity, open the way to the complete reestablishment of Christian unity according to the sacred will of the Saviour.”

With these words Athenagoras I, the supreme leader of Eastern Orthodoxy, reacted to the news that Pope Paul VI was planning an early January visit to Israel and Jordan.

In effect, Patriarch Athenagoras was suggesting a Christian summit. Champions of ecumenicity the world over at first hailed the idea. Archbishop Iakovos, Primate of the Creek Orthodox Archdiocese of North and South America, said it was “the greatest news of my life” and a portent of “the greatest moment of modern church history.”

The prospect that the meeting could embrace Protestants evoked encouraging comments from leading U. S. churchmen attending the triennial General Assembly of the National Council of Churches in Philadelphia. Said Dr. Eugene Carson Blake, stated clerk of the United Presbyterian Church in the U. S. A.:

“My response would be that if His Holiness (Athenagoras) and the Pope invited my Church to be present we would be there.”

Following the initial flurry of enthusiasm, however, it became obvious that neither leader was in any hurry to extend invitations. Indeed, observers began to wonder just who would take the initiative for such an unprecedented conference.

Two weeks after the proposal broke into the news it was still unclear whether a face-to-face meeting between the Pope and the Patriarch would take place. There was some speculation that the Pope had replied to the proposal of the Patriarch, who resides in Istanbul, but the contents of the message was not made public. One account suggested that what was envisioned was a common prayer in the Church of the Holy Sepulcher.

The first authoritative report that a definite meeting would take place came from Patriarch Theodosious VI, head of the Greek Orthodox Church of Antioch and All the Orient, who declared that the conference would be one of “courtesy” rather than of formality.

Some thought it significant that the Pope’s visit would extend through January 6—which is Christmas Day for some Eastern Orthodox churches under the old Julian calendar.

Both of the Holy Land shrines have a history of disputes behind them, and priests still argue over precedence when holy days coincide.

The majority of the bishops of the Orthodox Church of Greece—the only non-Communist Orthodox country—reacted negatively to the summit proposal on grounds that the time is not ripe for such a meeting. The Primate of the Church of Greece, Archbishop Chrysostomos of Athens, who is strongly opposed to the summit, adjourned the Holy Synod until January 10.

Pope Paul will travel to the Holy Land via an American-built (by Douglas) DC-8 four-engine jet operated by Alitalia, an Italian airline. Airline sources said a red carpet would be laid in the first-class compartment and that all the standard seats would be removed. A red damask bearing the papal seal is to cover the wall, and special armchairs are to be installed. A Vatican flag is to be painted on the outside of the fuselage. Stewards are to be on board in place of stewardesses.

The Pope will fly from Rome to Amman, a distance of approximately 1,500 miles or about a three-hour flight. He is expected to leave Rome early Saturday morning, January 4, and to return the following Monday evening. 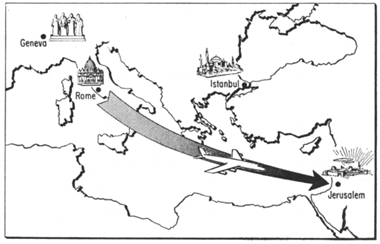 Where Was The Pope?

A U. S. Eastern Orthodox church theologian said last month that the Second Vatican Council did not fulfill the expectations of his church and that a “true dialogue” between Orthodoxy and Roman Catholicism still does not exist.

The Very Rev. Alexander Schmemann, dean of St. Vladimir’s Orthodox Theological Seminary in New York, and a “guest” observer at the council, called for restoration of the episcopacy to the position “we think belongs to it.” Schmemann made the remarks at a talk in Montreal.

His greatest personal disappointment, he added, was the “absence of the Pope from the deliberations.”

He declared: “The body of the church—that impressive body of 2,400 bishops—was there, but the head was not. I think this revealed the papacy as an irrational and mystical reality.”

A Roman Catholic edition of the Revised Standard Version of the Bible will be published in Great Britain next year.

Dr. Luther A. Weigle, dean emeritus of Yale Divinity School, who headed the 22-year project of translating and publishing the RSV, made the announcement at a session of the National Council of Churches’ Division of Christian Education assembly, held in Philadelphia last month in conjunction with the NCC’s triennial General Assembly.

Weigle said the special edition, to be published by Thomas Nelson and Sons in Edinburgh, Scotland, “is sponsored by the Catholic Biblical Association of Great Britain and will bear the imprimatur of approval by Catholic authority.”

The Catholic adaptation of the RSV, first approved Catholic Bible in English translated from original Hebrew and Greek texts, has been in preparation for several years by an editing committee of the British Catholic Biblical Association, Weigle said.

He declared that the version will employ some British spellings and word usage. “Catholic usage is followed by placing the Deutero-Canonical books (most of the Apocrypha) where they appear in the Old Testament of the Vulgate. In the New Testament a few readings of the Vulgate are used, certain footnotes added, and a few minor alterations made in the English rendering, all in the interest of Catholic usage.”

The RSV was first published eleven years ago by Thomas Nelson and Sons of New York. The NCC Division of Christian Education holds the copyright.

Songs are supposed to be ballyhooed to fame, but America’s current favorite composer-lyricist-singer agreed to record only it she would never appear in public and her real name wouldn’t be used. She is a young, guitar-strumming nun tucked away in a Belgian convent.

But her songs were too good to be locked behind walls. An album, “The Singing Nun,” and a hit single record, “Dominique,” have each sold nearly a million copies. The publicity cloister will break January 5 when Soeur Sourire (Sister Luc-Gabrielle’s pseudonym) performs on videotape for the Ed Sullivan television show.

In Hit Parade circles, female singers are uncommon, a nun unique. And in a list of teen-steeped love dirges, the sister won first place by telling of a cheerful missionary monk who begged his way across Europe at the turn of the thirteenth century and founded the Dominicans. Since the record is in French, these lyrics probably have as little impact as those of “Drip Drop” or “Loddy Lo.”

An Overdose Of Ritual

The “eternal flame” at the grave of President Kennedy was accidentally extinguished by a group of school children last month. The youngsters, ranging in age from eight to eleven, were taking turns sprinkling the grave with specially blessed water from a bottle. Suddenly the cap came off the bottle and the whole contents was dumped onto the flame at once. An attendant at Arlington National Cemetery restarted the flame with a match a few moments later.

The use of “holy water” as a form of blessing dates back to the eighth and ninth centuries. Although commonly practiced within the Roman Catholic Church, it is not a part of official dogma. Sprinkling of graves assumes that the dead person is in purgatory for a period of purification. It is a common pious belief, says one Catholic source, that such an act “affords a means of relief to the deceased soul.”

Monks have been making bread and wine to support their orders for a long time, but nuns probably began using pop music for profit only four years ago. The pioneer, seventeen-voice Jesus and Mary Choir of Hyattsville, Maryland, now has five albums out. While Soeur Sourire holds the spotlight, nuns at Mt. St. Mary’s College, Newburgh, New York, have quietly earned $100,000 with an LP of Broadway-type fare titled “Joy.”

Soeur Sourire turns out catchy folksongs full of rhythm and personal touches, but they are religious songs, though quite a break from liturgical tradition. Her melodies (and guitar accompaniment) have the touch of honest simplicity that makes good folk music ring. Her voice, though untrained, is crystalline, on pitch, and expressive. Her words show the most talent and, at least in the translations included with the album, give hardly a nod to anything specifically Catholic.

The spirit of the songs is usually chipper. Even a “Lament” predicts, “You will go radiantly to labor in the workshop of noble human efforts.” Occasionally, she creates a haunting mood, as in the gently shifting tonalities of “Little boat upon the water, float, my soul, toward the Most-High.”

Theology sometimes drowns in the flood of joy. One song promises, “All the roads of this world lead you to heaven.” In her witty version of the resurrection of the dead, reporters rush around to interview the famous; Archimedes, in his bathtub, “overflows with emotion”; Boy Scouts sell Eskimo Pies to starving Alaskans as their good deed; and (was the convent spared of the movie’s infamy?) Anthony and Cleopatra “meet ‘nose to nose’ … in their immortal lovemaking.”

The messages and morals are usually autobiographical. The album’s only secular song tells of her buying her guitar, Adele, just before entering the convent after forsaking the life of an art student. Another tells how “by chance, in my wanderings, I met my God one summer eve, entrusted him with my loneliness, and his grace was my salvation.” Like the Protestant gospel songs, they speak to the individual: “The day that God redeemed you, on that day, the day he made you his child forever, the day when he made his dwelling in your heart, blessed be that day.”

The sister is now studying advanced catechism and will soon be a missionary in an underdeveloped land. If Adele goes along, then the nun’s delicate wish will continue:

With a singing heart …