The future of the church in Chad hangs in the balance this month as the government takes the next step in its cultural revolution plans.

Twice the size of Texas but with only one-half the population, land-locked Chad is sandwiched between the Sahara desert in the north and jungle rainforests in the south. The southern third, with over half the nation’s five million population, forms the power bloc of President Ngarta Tombalbaye, himself a southerner. It also has been the area of greatest missionary activity and church growth, with over 60,000 members in 1,500 evangelical churches, plus thousands of adherents. A “saturation-evangelism” program in 1972 and 1973 by The Evangelical Alliance Mission (TEAM) in southwest Chad netted thousands of converts, and 4,000 prayer cells met regularly during the campaign. Missionaries view the rapid growth as a mixed blessing; it is difficult to provide adequate Christian teaching to so many at once.

Last year, President Tombalbaye launched a cultural revolution to strengthen his support in the “black” south; Muslim rebels controlled the other two-thirds of the nation. All “European” influence was to be removed. Non-Chadian names, including Bible names, had to be dropped. (Muslims, however, have not had to change their Koranic and Arabic names, nor undergo traditional initiation rites.)

Phase Two of the “authenticity program” was launched last November with a presidential decree that all tribesmen must submit to their traditional initiation rites—secret ceremonies often involving sacrifice to ancestral spirits and an animistic “rebirth.” The first area was to be the president’s own Sara tribe, in the southeast. Christians protested, bringing reprisal. Their homes and farms were ransacked, their ... 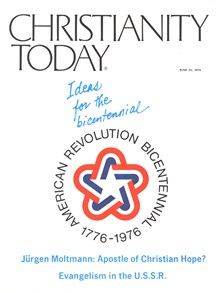 This article is from the June 21, 1974 print issue. Subscribe to continue reading.