November 22, 1974
This article is from the November 22 1974 issue. Subscribers can read all of CT's digital archives.

The Facts Of Christ’S Life

Life-of-Jesus research continues to attract a good deal of attention in print. These two books are somewhat unusual, one from the perspective of the public addressed, the other from the perspective of the discipline of the writer. C. Leslie Mitton is the editor of the Expository Times and an ordained Methodist minister who has done considerable writing on New Testament subjects. Norman Anderson is director of the Institute of Advanced Legal Studies at the University of London and an Anglican layman who, in addition to his legal activities, has written and edited works in the field of religion, primarily comparative religion.

Mitton writes for ministers and school teachers, not for scholars. After a good, brief introductory chapter on the course of investigation in the twentieth century, and a second chapter demonstrating that our main source materials for the life of Jesus are the Gospels, he tackles the question of the historical accuracy of the Gospels. While he finds the skepticism of Bultmann unwarranted at many points, he is convinced that the early Christian community modified and even created incidents concerning Jesus and sayings attributed to him. Yet he insists that knowledge of the historical Jesus is important, and after listing his reasons for such a belief, he proceeds to enumerate criteria for distinguishing the historical from the nonhistorical, criteria similar to those noted frequently ... 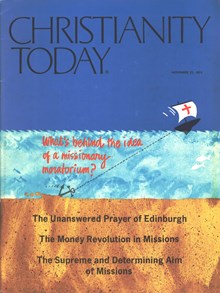 This article is from the November 22, 1974 print issue. Subscribe to continue reading.