Many nonevangelicals are reaffirming the church's traditional style and spirit.
Paul F. Scotchmer|February 2, 1979

A director of administration at a seminary told a story of a student who rode into school on a motorcycle, carrying all his worldly possessions in a worn-out pack, and wearing long, unkempt hair. After about a week the student announced that he was leaving, explaining that “There is no support community for me here.” “I couldn’t help laughing,” said the administrator. “A few years ago a number of students left for the same reason; but they were clean-shaven and had short hair!”

Students who attend nonevangelical seminaries are changing. That fact should not get lost amid all the media attention lately given to evangelicals. For example, consider the Graduate Theological Union (GTU) in Berkeley, California, across the bay from San Francisco. The GTU has two degree tracks. It offers in its own name M.A. and Ph.D. programs in several theological fields, in cooperation with the adjacent University of California. It is also a consortium of nine Bay Area seminaries, most of which are based in Berkeley, and each of which offers a variety of degrees relating to professional religious ministry.

The most visible change in the student body is the number of women. Although the total number of divinity students in the GTU has increased by less than 10 per cent since 1968, the number of women has increased from a mere 5.5 per cent of total enrollment a decade ago to more than 30 per cent today. In four of the six non-Catholic seminaries, women now account for 40 per cent or more of the Master of Divinity (M.Div.) students. Given the present trend, reference to women seminarians as “minority” students, at least at the GTU, may soon be an anachronism.

Although not quite as visible as the ... 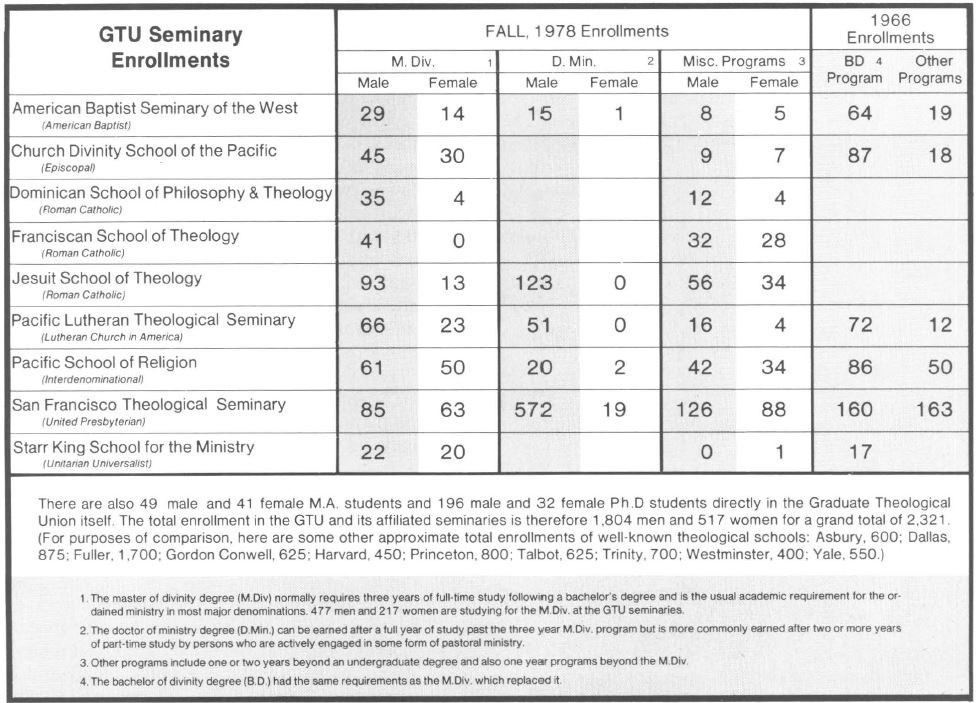 This article is from the February 2, 1979 print issue. Subscribe to continue reading.