Evangelist Billy Graham last month landed in a lion’s den. Responding to a long-standing invitation to preach in the island city-state of Singapore (the name means “Lion City”), he arrived there for a five-day crusade. He was greeted by four shaggy “lions,” prancing to the rhythm of cymbals and drums—a traditional welcome.

To some observers, Graham’s preaching tamed many “lions” in this multilingual society, which is located off the Malay peninsula. A cumulative total of 337,000 persons attended the crusade, and the 65,000-capacity National Stadium was filled nearly every night.

The sermons were translated into Mandarin Chinese by interpreter Peter Yap, while simultaneous translations over 6,000 earphones were provided in the Cantonese and Hokkien dialects of Chinese, as well as Malay, Tamil, and Indonesian languages. The crowds, predominately young people, also came from neighboring countries. Of the 19,600 persons who made decisions for Christ, more than 80 per cent were under the age of thirty. About 65 per cent of the inquirers at the crusade made first-time commitments.

According to several church leaders in Singapore, the crusade was the culmination of recent efforts at church outreach. “After years of sowing, weeping, and watering, we now see the harvest,” said Ernest Chew, vice-dean of the University of Singapore faculty. (Chew said that 25 per cent of the student body profess Christianity, and that increasing numbers within the faculty at two local universities are becoming Christians. A university dean, who is also a prominent politician, made a Christian commitment six months earlier, he said.)

Tony Chi, pastor of the largest Protestant church in Singapore ... 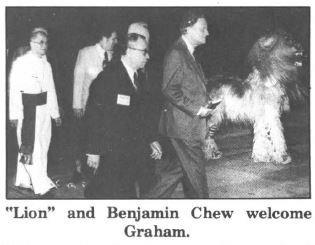 This article is from the January 19, 1979 print issue. Subscribe to continue reading.