Bitburg: Must We Forgive?

Scripture throws light on this international incident.
Kenneth S. KantzerJuly 12, 1985
This article is from the July 12 1985 issue. Subscribers can read all of CT's digital archives.

When President Reagan laid a wreath on the graves at Bitburg, he unwittingly taught the whole world some fundamental lessons in theology and ethics. The President’s motive was clear: he wished to make a powerful affirmation of good will toward the German people, and to toughen the bonds of mutual respect and cooperation already existing between the nations.

But human acts are subject to different interpretations. What to some was a simple act of national good will quickly became an international incident reviving the hates and fears of Hitler’s world.

Who Was Sinned Against?

In the ultimate sense, only God can forgive sin, for he alone is the sovereign Judge. Yet we humans can forgive the wrongs that have been done us. Discussing the Bitburg crisis, Lance Morrow (Time, May 20) fittingly cited the poet John Dryden in his title, “Forgiveness to the Injured Doth Belong.”

But does this mean that it was wrong for President Reagan to express forgiveness and a desire for reconciliation with the German people because they wronged only Jews and not Christians or non-Jews?

Bitburg: Must We Forgive?

Bitburg: Must We Forgive?
expand
hide this 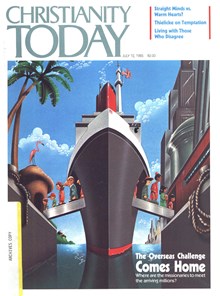 This article is from the July 12, 1985 print issue. Subscribe to continue reading.