Timothy K. JonesSeptember 24, 1990
This article is from the September 24 1990 issue. Subscribers can read all of CT's digital archives.

Sometimes the call came from a fiery Catholic nun, other times from an impassioned Pentecostal preacher. But over 20,000 participants at this summer’s Congress on the Holy Spirit and World Evangelization heard a repeated summons to worldwide evangelization.

Attendance at the five-day workshop and worship event, held in the Indianapolis Hoosier Dome, fell short of an expected 25,000. But there was no lack of enthusiasm: Exuberant worshipers joined hands and ringed the arena in the evenings for spontaneous singing and dancing; thousands flocked to afternoon workshops on evangelism.

The conference built on the evangelistic emphasis of previous, similar events, such as the 1987 congress held in the New Orleans Superdome. While the New Orleans conference emphasized using spiritual gifts, including healing and speaking in tongues, to reach the world, this year’s emphasis, said congress chairman Vinson Synan, did more to “point to the end of the century, challenging the whole charismatic movement to become aggressive evangelistically.”

There was no lack of the hallmark charismatic emphasis on signs and wonders and the power of the Holy Spirit, but, according to organizers, the congress theme, “Evangelize the World, Now!” captured more of charismatics’ growing evangelistic urgency.

Speakers at the evening worship services frequently challenged what they saw as North Americans’ complacency and lack of commitment to carrying the gospel to the world’s physically poor and spiritually lost. The early Christians did not just “enjoy” Pentecost, argued Sister Linda Koontz, head of a Catholic outreach ministry among the poor.

Koontz shared the platform that evening with a slate ... 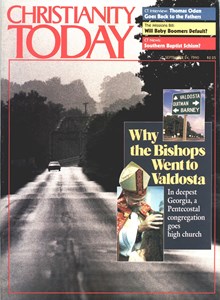 This article is from the September 24, 1990 print issue. Subscribe to continue reading.