Steve Sywulka and John MaustFebruary 11, 1991
This article is from the February 11 1991 issue. Subscribers can read all of CT's digital archives.

Religious faith is emerging in the officially atheistic nation of Albania. According to reports from Keston College, a religious-rights monitoring group, Albanian President Ramiz Alia has proposed constitutional reforms that could weaken the Communist party’s monopoly on power and open the door to long-banned religious expression.

Alia told the Communist party’s Central Committee that constitutional changes were needed: “The freedom of conscience is violated because, just as it is anyone’s right to be an atheist, so he must not be prohibited from believing.” He also proposed changes in prohibitions on public places of worship.

While official policy may remain unchanged, in practice the people of Albania have begun to express their religious belief. Keston reports that at the end of last year, an estimated 300 to 2,000 people attended a Catholic Mass in the town of Rrmajit, which was celebrated by Fr. Simoni Jubani, who was apparently released last year after 25 years in prison. Large crowds attended Christmas celebrations and open-air meetings.

An Assemblies of God pastor has been executed in Iran amid a new wave of repression aimed at Christian believers and churches. Sources inside Iran report that Hossein Soodmand, 55, was hanged December 3 after being tortured during two months of imprisonment.

Pastors who visited a prison in the city of Mashad in northeastern Iran were told of the hanging, shown a coroner’s report, and escorted by prison authorities to a grave-site they said contained Soodmand’s body.

Soodmand was one of a handful of Muslim-convert pastors serving in Iran, ministering 24 years after his conversion. He first ... 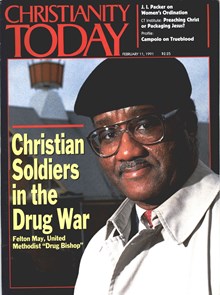 This article is from the February 11, 1991 print issue. Subscribe to continue reading.