Translators alter 7 percent of the text to update style and gender issues.
Timothy C. MorganFebruary 4, 2002
This article is from the February 4 2002 issue. Subscribers can read all of CT's digital archives.

A full TNIV Bible will not be available until 2003 or later. IBS and Zondervan will honor a commitment made in 1997 to continue to market the existing NIV, the best-selling Bible translation in the world.

Seven percent of the TNIV New Testament text and footnotes has changed from the NIV. Some alterations are stylistic. Mary, mother of Jesus, is "pregnant" in the TNIV, instead of "with child."

The Committee on Bible Translation (CBT), an independent group of Bible scholars, is producing the TNIV text. "Developments in biblical scholarship … made a new translation necessary," said Ronald Youngblood, a CBT member and chairman ... 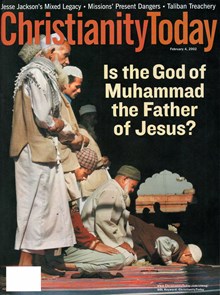 This article is from the February 4, 2002 print issue. Subscribe to continue reading.