I recently watched a film in which Jim Caviezel plays a man with the weight of the world on his shoulders, a man determined to do the will of his father, a man who occasionally endured great pain—physical and emotional—en route to immortality. The Passion of The Christ? Nope. This was a movie about a golfer.

But Bobby Jones: Stroke of Genius is more than just a sports movie. It's a film about triumph over adversity, about the complexities of relationships, and about the grit, determination and integrity of a family man on multiple missions—clichés all, indeed, but they're handled tastefully and sensitively enough that you really do care about what happens to the good guy in the end.

Much of that is due to Jones' story; he's a fascinating man who overcame numerous hurdles to become not just the world's best golfer, but to earn three college degrees (including one from Harvard Law School) along the way. But it's also due to Caviezel's winsome portrayal. The Passion proved that Caviezel could play the role of a tortured man. Here's a more well-rounded Caviezel displaying a wider range of emotions. We see everything from an impetuous temper (Jones angrily hurled quite a few clubs early in his career), to the elation of winning a title (he won 13 overall, including the Grand Slam in 1930), to the conflicted frustration of trying to meet family expectations (Dad wants a great golfer, Mom wants an educated son, and wife Mary wants Bobby at home), to the agony of dealing with ongoing pain (physical and emotional).

Jones was a sickly child who almost died at birth, and suffered from various ailments throughout his life, including an agonizing case of varicose veins during the height of his career. He also endured ... 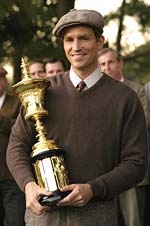