Why do big screen killers seem so glamorous? It's not the filmmaker's fault, necessarily. We're flawed and foolish people, drawn to power, to independence, to the illusion that we can be gods unto ourselves and keep our hands, hair, suits, and consciences clean.

The villain in Collateral is as devilish a man as we've seen onscreen in a while. He's almost irresistible, always ready with a rationalization, and quick to turn against you in those moments when you try to break free of his influence. It's interesting how much he compliments the cleanliness of the taxicab that he hijacks at the beginning of the film. The devil's not ugly—he likes things clean, shiny, and efficient. That way, nobody tries to look at what's going on underneath.

About halfway through Collateral, the poor, persecuted cab driver turns and delivers an ultimatum to this gun-wielding hit man who has commandeered his car and his services for the night. He describes his hijacker as a man "missing some parts" that are "supposed to be there." In that moment, Max (Jamie Foxx), a mild-mannered driver with big dreams, sums up his cold-hearted passenger.

Not just another ride in a yellow cab

But the words resonate on another level, because they perfectly describe the distinct acting quality of the man playing the killer: Tom Cruise.

Cruise has always looked like a movie star. But most of his roles—from Top Gun to Days of Thunder to A Few Good Men and The Last Samurai—have been similar: driven champions-to-be, momentarily prevented from triumph, bound to overcome some personal obstacle or loss, and then grinning and glorious in the winner's circle. Cruise's performances always evidence drive and discipline, but little else. They lack complexity or heart. They've got rock-and-roll, but ... 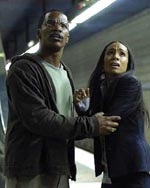