Calling a film one of the great remakes of all time sounds like faint praise indeed. Most celluloid retreads are bad ideas, badly executed. Either the first go-round wasn't all that good—so why waste everybody's time and money again? Or it was truly great, and the new version is at best a decent knockoff—so why bother? Just watch the original.

Not so with Jonathan Demme's new treatment of The Manchurian Candidate. Rent the 1962 version, by all means—this classic Cold War thriller was released last week as an affordable DVD—but mostly so you can see how dazzlingly inventive a remake can be.

This time around, a Desert Storm recon mission is ambushed and, after a few days missing in action, the soldiers find their way back to safety with only a couple of casualties, earning Sgt. Raymond Shaw (Liev Schreiber) a Medal of Honor and an eventual nomination to the vice-presidency of the United States. One problem: two of the other survivors start having terrible nightmares that suggest the whole thing may never have happened. Or, at least, that it happened very differently.

The further the story progresses, the more obvious it becomes that this really is the right movie at the right time—again. In 1962, with Cold War anxieties everywhere, McCarthyism a not-distant-enough memory and the Korean conflict a pretty good stand-in for the escalating troubles in southeast Asia, a movie about a war hero who'd been brainwashed by the Reds and placed like a time-bomb in the center of the American democratic process was close enough to plausible to send real shock waves through a fearful nation.

In 2004, we're again preoccupied with enemies on the home front, confronted with the very real threat of neighbors who may ... 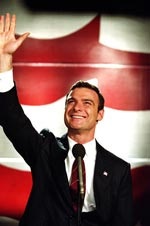