Halfway through The Chronicles of Riddick, the title character (Vin Diesel) leads a ragtag group of convicts across the surface of the planet Crematoria where the daylight temperature is 700 degrees. (Get it? Crematoria!)

As they make their dash, sunrise hits (which seems to happen about every seven minutes on Crematoria). Sunlight rolls across the planet and nips at the group's heels as they run. It's an impressive sight. However, the suspense is deadened because, it turns out, the heroes can avoid the 700-degree heat by ducking in the shade. In fact, when a character is trapped in the sunlight on a cliffside, all Riddick has to do is swing down on a rope and pull her under a rocky outcropping. In the safety of the shade, the hero poses as smoke rises from his shirt. All you can think—besides sunscreen jokes—is: Wow, isn't Riddick cool?

The race against the sun typifies this sci-fi actioner: it's big, pretty to look at, and doesn't make much sense. But it also proves the major selling point of both The Chronicles of Riddick and its predecessor, Pitch Black. When the original space thriller was released in 2000, the general consensus was: "Eh. Average action film, but wow, isn't Riddick cool?" Obviously, writer and director David Twohy and producer Diesel thought the same thing. In this first of three planned sequels—especially in one key scene—you realize they want to turn Riddick into a Conan the Barbarian hero: epic and larger than life with grand mythos and a destiny.

As the movie begins, the murderous convict Riddick has been hiding from bounty hunters since surviving the events of Pitch Black. But the law isn't the only group that wants him. He is also in demand because he could be the man prophesized ... 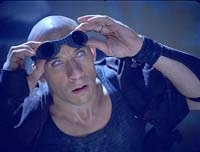