Smokey Robinson and the Miracles were Motown's hottest act in the '60s. These days, Robinson's gig takes him to churches and prisons, where he shares his Christian faith.
Andy Argyrakis|June 14, 2004

Motown legend Smokey Robinson, one-time leader of The Miracles ("Ooh Baby Baby," "The Tracks of My Tears," "The Tears of a Clown"), started out in early soul and R&B genres in 1958, and has scored hit singles in every decade since. But aside from some scattered concert tours in recent years, Robinson, 64, is more often speaking at churches and charities, making his Christian faith more public. And now along comes his first spiritually themed album, Food for the Spirit, ending a five-year recording hiatus. We recently had a nice chat with Robinson, just a day after Motown's latest televised anniversary special. Here's what the member of the Rock and Roll Hall of Fame had to say …

What are your feelings when you're able to reunite with the Motown family?

Smokey RobinsonThat's always wonderful, man! One thing I can say about the Motown acts is that we were a family. That's not a myth. And we still have that same attitude, those of us who are still here. When we see each other, it was like it was just yesterday because we have that love and that brotherhood and that sisterhood that has lasted throughout the ages. It's always good to see any of them, especially those you haven't seen in a long time.

What's your relationship with Motown, despite working on non-Motown projects? 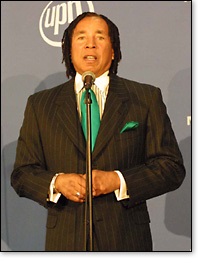