Peter Jackson says he would like to direct The Hobbit, but it's at least a couple years—and perhaps a few legal battles—away.
March 9, 2004

The Associated Press has reported that Peter Jackson, the Academy Award winning director of the Lord of the Rings trilogy, plans to film The Hobbit, the prequel to the LOTR stories.

Jackson is currently busy doing a remake of King Kong, but said he'd like to do The Hobbit after that—with filming to begin probably no sooner than 2006. He said he hoped Ian McKellen would return in the role of Gandalf.

Greg's previews guesses that at the earliest, The Hobbit would hit theaters in December 2007.

The Hobbit, written by J. R. R. Tolkien, tells the story of Bilbo Baggins and his adventures, which occurred many years before the Lord of the Rings stories took place in fictional Middle-Earth. 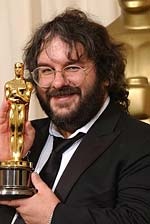