All the style in the world can't save a stupid script, though Taking Lives director D.J. Caruso sure gives it his best shot. The film certainly starts with an interesting premise, even if it feels like the sort of thing that only happens in gimmicky cop movies with punny titles: The story concerns a serial killer who has spent nearly two decades not only bumping off his victims, but assuming their identities, too—using their credit cards, paying their taxes, even pursuing their dreams. But Caruso shows little interest in developing this idea; instead of following the killer, he follows the cops, and along the way he takes a film that started with intrigue and turns it into a fairly routine thriller that eventually spirals into silliness.

Angelina Jolie stars as Illeana Scott, a bright FBI profiler who has come to Montreal to help the local police solve a murder. Obsessed with her work, she tacks crime-scene photos above her hotel bed and to the chair opposite hers at the dinner table, and she has a fine eye for detail. At several points, the film cuts between intense close-ups of her eyes and the details they scan, from the facial features of the people she interviews to the objects they handle while she talks to them. Illeana also knows just what tricks to play in the interrogation room to determine whether or not someone should be a suspect.

One witness who crosses her path is Costa (Ethan Hawke), an artist who not only may have seen the killer, but can draw the suspect's face—no need for a police sketch here! And since Illeana is played by a sexy Hollywood actress, her professonalism is inevitably thrown to the winds, as she strikes up a rapport with Costa that segues quickly from friendship to something more, ... 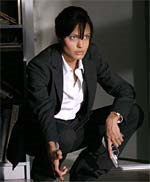