Years ago, when I was a teenager obsessed with history, I began to wonder why Christ had come to Earth at the particular time that he did. Why not a century or two earlier or later? I eventually settled on the idea that he had come at the time that would have been most opportune for spreading the gospel—a time after the Greeks had unified many of the world's cultures and bestowed on them a common language, and a time after the Romans had unified many of the world's governments. It seemed unfair, then, that the Bible had almost nothing to say about the Greek empire; the Assyrian, Babylonian, Persian and Roman empires all had major roles to play, but apart from an obscurely-written prophetic passage or two, the Greeks fell into that gap between the Testaments.

Likewise, there have been very few films about Alexander the Great and his conquests; the genre of the ancient epic is so dominated by biblical stories that, traditionally, even films that concern themselves with pagan history have been obliged to at least refer to the looming arrival of Christianity in their narration. The last major film about Alexander, which starred Richard Burton and came out in 1956, even tweaked the dialogue in places so that it sounded kind of biblical, and concluded with Alexander becoming a monotheist. But thanks to Gladiator, unapologetically pagan epics are now in vogue, and thus Oliver Stone has finally fulfilled his years-old ambition to commit the life of Alexander to celluloid.

It's a good thing Troy, another thoroughly pagan Greek story, came out just a few months ago and revived the myth of Achilles for modern audiences, since the historical Alexander evidently fancied himself a descendant of Achilles, and he lived by the same basic ...

Join in on Facebook
Tags:
None
Posted:
November 24, 2004
More From: Peter T. Chattaway 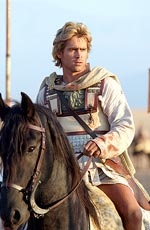