Suppose that one day, you woke up to find that the life you knew was only a memory that you could recall, and that everyone else around you remembers things differently. Who's right and who's wrong? Is your mind playing tricks on you, or is there something else at work?

That's the intriguing premise to The Forgotten, a mystery/thriller starring Julianne Moore (Laws of Attraction, The Hours) as Telly Paretta, a Brooklyn mother grieving the loss of her nine-year-old son Sam in an airline mishap last year. Still distraught, she finds herself habitually clinging to items in Sam's dresser drawers. She seems to be making progress by going through therapy with Dr. Munce (Gary Sinise of CSI: NY), easing back into work as a book editor, and re-developing intimacy with her husband Jim (Anthony Edwards from ER). 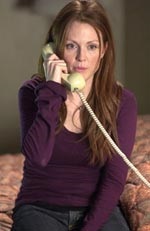 But soon we learn that Telly is seemingly experiencing lapses in memory. Wasn't her car parked closer on the street? Wasn't she drinking coffee a minute ago? And didn't that family photo have her son in it? Telly quickly suspects that her husband and therapist are trying to erase Sam from her life to ease her mental anguish, though they claim that Sam never existed. But if that's the case, why do other clues begin to surface that suggest she's not crazy? Like Ash Correll (Dominic West of Mona Lisa Smile), the single father down the street who also lost his daughter on the same plane as Sam. At first, he has no memory of her, but it isn't long before delusions morph into elaborate paranoia.

Much more than that would involve giving away key plot points to the puzzle moviegoers are hoping to unfold. If you've seen the trailer for this film, it does a perfect job of promising intrigue and possibilities. Is all of this in Telly's imagination? Is she developing a psychosis? Is it all a scheme to make her believe she's well? Is it an elaborate kidnapping? Are there space aliens involved? Was there a major last-minute script revision that she wasn't told about?

Telly (Julianne Moore) grieves the loss of a child

The Forgotten starts off interesting, seemingly focused like 2000's breakthrough Memento on the idea of memories—what triggers them, what's real and what isn't. Unfortunately, the movie soon detours from there, more interested in keeping pace than in exploring themes or developing a well-constructed mystery.

Part of the problem is that the script—written by Gerald Di Pego (Angel Eyes, Phenomenon)—doesn't allow us time to settle into the characters and choose sides. How can we possibly consider Telly to be crazy when her actions propel the plot and her logic quickly finds other characters in the wrong? And how can we savor the possibilities of Telly's predicament when she keeps taking leaps in logic that prove to be right while swiftly eliminating the other theories?

Dominic West plays a father who has also lost a child

For the most part, Moore does play her role convincingly. She's one of the few leading actresses today capable of playing a 40-year-old mother with strength, fragility, sweetness, determination, and a little bit of unhinged paranoia. Praise also goes to West for playing an enjoyable sidekick with a lot of cute and funny comeback lines. But jeers to the usually effective Alfre Woodard as a completely unconvincing police detective who practically takes Telly at her word from the get-go. She's not a cop, but a simple stock character—and a badly developed one that adds nothing to this story.

On top of that, this isn't a terribly suspenseful or compelling movie, and that's sure to surprise anyone planning to see it. Directed by Joseph Ruben (Return to Paradise, Sleeping with the Enemy), there are at least some very well-staged visual surprises (not scares). Too bad most of them were shown in commercials and the trailer. (For those who have seen it, is it just me, or does this movie's big effect look like the infamous bridge sequence from Monty Python and the Holy Grail?) For the most part, we've seen this movie done better in other films and TV programs. The clues are laid out like breadcrumbs, and I have to believe that most other moviegoers will also be several steps ahead of the game here. 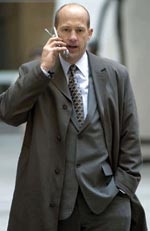 Earlier this summer, critics and audiences raised a stink over M. Night Shyamalan's The Village, complaining that the plot twist was too obvious and uninteresting. Admittedly, I too considered its solution early on, but at least that movie left its options open and played with the possibilities while offering some interesting film work. The Forgotten doesn't allow that luxury, following a predictable path that leaves little room for guessing. Anyone who's thought about this movie after seeing the ads have surely already considered its secret, and it'll be confirmed for you within the first thirty minutes.

Worse, once you know all the details, you soon realize this house of cards doesn't hold up, asking why plot points aren't handled by characters with more efficiency. Despite a small pro-life message in the mix, the climax is a disappointment, lacking the quick visual thrills earlier in the movie and failing to answer many key questions raised throughout. There is a slight twist within the twist to provide the slightest of surprises, but it's nothing close to any kind of payoff.

If you have your heart set on seeing this movie, then by all means go. There have been much worse, but there's also much better. If you want a really good mystery/thriller, I'd recommend the very similar and sadly overlooked Dark City from 1998. For the sake of the plot points, I won't say how that movie is similar to The Forgotten … but at least it's not forgettable.

The Forgotten is rated PG-13 for intense thematic material, some violence, and brief language. There are a few scenes that are more surprising than scary. The violence is generally bloodless, involving a few punches, struggles, gunshots and breaking of glass. The Lord's name is taken in vain a few times. Small children might be fretful over this film, but before PG-13 was invented, it would have easily been tagged with a PG. Very little will be edited for television.

You've probably seen several movies about parents trying to save their kidnapped, dying, or otherwise endangered children. In Joseph Ruben's film The Forgotten, poor Telly Paretta faces a dilemma of a different order. Her son is already dead—killed in a plane crash. But now, as she grieves, she's suddenly put in the position of having to prove that her son ever existed in the first place.

Telly, played by frequent Oscar-nominee Julianne Moore (Far From Heaven, The Hours, Vanya on 42nd Street), is understandably dismayed when her psychiatrist (Gary Sinise) tells her that her memories of her son are merely delusions. When she rushes to gather photographs and other evidence, she discovers that it has all vanished. The father of another mysteriously disappeared crash victim (Dominic West) joins her desperate search for proof of their kids and their sanity.

As is their wont, religious film critics are relatively concerned about moviegoer sanity, and so they're sending out some cautions about The Forgotten. Apparently, children aren't the only thing hard to find in the film—plausibility and a satisfying solution are missing as well.

"This isn't a terribly suspenseful or compelling movie," writes Russ Breimeier (Christianity Today Movies), "and that's sure to surprise anyone planning to see it. There are at least some very well-staged visual surprises (not scares). Too bad most of them were shown in commercials and the trailer. For the most part, we've seen this movie done better in other films and TV programs." As an alternative, he recommends mystery/thriller fans rent 1998's Dark City.

"There are at least three moments that may make you jump out of your seat," says Harry Forbes (Catholic News Service), "and director Ruben maintains a taut mood, even as you see loopholes in a plot that doesn't entirely avoid a feeling of contrivance."

Bob Smithouser (Plugged In) lists off the pros and cons: "Riveting concept. Creepy atmosphere. Other adjectives worth tossing into the mix are 'mediocre,' 'illogical' and 'occasionally silly.' It also uses too much profanity, which is its most egregious sin."

Michael Elliott (Movie Parables) gives the film higher praise, saying that the filmmakers "have made nine-tenths of a riveting movie. There are more than a couple of 'gotcha' scenes and the mystery surrounding the film's events draws us into the story and keeps us interested in knowing more … right up to the point where the mystery is revealed … a disappointing letdown after such a strong setup."

David Bruce (Hollywood Jesus) zeroes in on the significance of the story's theme: "There is nothing more important in life than relationship. A person who is driven to establish appropriate and meaningful relationships with those that they love can be a force of unimaginable drive. Basically, in this film, Telly has to walk over all the power of the enemy to re-establish her most important relationship."

But on the same page, Kevin Miller says The Forgotten "ultimately [fails] due to half-baked story development and endings that are so conventional you just wish the screenwriters had thought to give M. Night Shyamalan a call."

Bret Willis (Christian Spotlight) says, "Some commentators are calling it derivative fluff. I'm withholding judgment." He goes on to say, "If you like SciFi, and can handle edgy PG-13 material, suspense, heartbreak and some far-out twists, you'll probably like it. For non-SciFi people, it will probably seem like a waste of a talented cast."

Hollywood Worldviews author Brian Godawa (Godawa.com) blogs, "It's all very creepy with some very surprising moments. Kept me on the edge of my seat. But regretfully, the film is a set up without a pay off. It has the potential to be a very profound inquiry into the nature of memories and human value, but it falls flat for me."

Amongst mainstream critics, you'll find more disapproval than approval, and a whole lot of wordplay in reference to how quickly the film will be "forgotten."

Mike Parnell (Ethics Daily) says, "The Forgotten has a strong opening act, but it begins to sputter and falter as it moves to the second. By the time it gets to the final act, it has run out of gas. Its ending is as nebulous as the beginning, with no real satisfaction. There are more questions than answers."