Bernie Mac has a talent for cussing. He really does. Whether it's accompanied by his trademark look of incredulity, his "come to papa" grin, or something in between, few people have his timing or panache when it comes to the delivery of a well-placed expletive. It's a talent that can take you pretty far in the entertainment industry, but it still can't carry a movie, as Mac's latest outing, Mr. 3000, demonstrates.

In the movie, Mac plays Stan Ross, a baseball player who likes to call himself "the king with a swing" among other grandiose things. We meet him as he makes his 3,000th base hit. He struts to the plate, takes verbal jabs at everyone within earshot, and drills the ball straight at the pitcher. Men everywhere cringe in unison. In retribution the pitcher throws the landmark ball, which Ross is already demanding from his place on first base, into the stands. Ross throws a fit and climbs into the stands to find the ball. A young boy holds it up happily, hoping to have it autographed. But instead Ross threatens the kid, grabs the ball, and stalks back to the field.

Actions might speak louder than words, but in this case both are shouting, "Saul Ross is an arrogant jerk!"

After the game Ross quits baseball and retires, despite the fact that his team, the Milwaukee Brewers, is in the pennant race. He figures that with 3,000 hits under his belt, he's guaranteed a spot in the Baseball Hall of Fame. And that's all he cares about. Ross proceeds to build a strip mall empire based on his Mr. 3000 moniker ("Get your eat on at 3,000 woks!") and waits to join "all the other immortals" in baseball history.

Induction to the Hall of Fame is based on the votes of sportswriters, and in his tenure as a Brewer, Ross not only alienated his teammates and fans, but also the journalists covering him. A phrase about biting the hand that feeds you comes to mind … Nevertheless, Ross is getting closer to the Hall. He's only four votes away when an accounting error is found. It turns out he's actually only got 2,997 base hits.

"Mr. 2997" just doesn't have the same ring to it, so Ross joins back up to get his three hits and restore his claim on the Hall of Fame. And, thanks to the requisite "old guy getting back into shape" montage ("Hello, Mr. Ross. Meet Pilates), we get some of the first bits of humor that don't rely on Ross' ridiculous strutting or the aforementioned expletives. 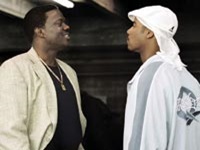 Stan meets T-Rex (Brian White), a younger version of himself

Mr. 3000, the movie, starts to develop some heart about the same time Mr. 3000, the man, starts to develop some heart. Upon his return to the clubhouse, he's confronted with the manager he abandoned (Paul Sorvino in a nearly mute role that proves words are overrated as a actor's tool), his own second coming in the pompous superstar T-Rex Pennebaker, and the woman he could never commit to, Mo Simmons (played by the perennially fabulous Angela Bassett). It's the mirror provided by Pennebaker that starts Ross down a path toward self-awareness and cinematic redemption.

There are flashes of beautiful filmmaking here. A baseball warm-up set to a classical score makes America's pastime look like an athletic ballet and the camera work during clutch hitting situations provides a gravitas that takes the game and Ross' endeavor seriously. Ross himself develops a welcome sincerity as his "better gods" are roused and a few heartwarming moments will definitely sneak up on the unsuspecting moviegoer.

The always-wonderful Angela Bassett as Mo

But the movie is ultimately disjointed. For example, while the fans in the stands can't seem to get enough of Ross, the fans he meets one-on-one can't stand him. This disconnect is writ large across the movie but never addressed. It's rather puzzling. Ross' transformation is also a bit quick. Despite a media-induced ego relapse that serves to ratchet up the tension, Ross learns his lessons pretty fast. In the first half of the movie he doesn't have patience for or interest in anyone but himself. But after the Pilates fitness regimen, he's more eyes and ears than mouth. All of a sudden he cares that his team members, Little Leaguers when he was in his heyday, hate him. It isn't long before Ross is dishing out advice on the fundamentals of baseball and taking Pennebaker under his wing to help him avoid some of his own youthful mistakes.

Back to the cussing. We've established that Bernie Mac has a talent for it. But this movie shows he's also got some other tools in his acting arsenal—comedic timing, relate-ability, a penchant for physical humor and so on. He can make you hate him and make you love him. In that sense he's a little like his character, Stan Ross. Here's hoping that in the future Mac will find more interesting material with which to rouse his own "better gods."

Cursing and casual sex (including shots of skimpy lingerie and a bare behind) make this movie unsuitable for kids and young teens.

Mr. 3000 stars Bernie Mac as Stan Ross, an arrogant baseball star who gets his 3000th hit and, figuring he's a shoo-in for the Hall of Fame, retires on the spot—only to learn, several years later, that due to a counting error, he's actually three hits short of that magic number. So he gets back into the game, and along the way he learns a few things about humility and being part of a team.

Lisa Ann Cockrel (Christianity Today Movies) finds the movie "disjointed" and notes that Mac has a talent for cussing. "But this movie shows he's also got some other tools in his acting arsenal—comedic timing, relate-ability, a penchant for physical humor and so on. He can make you hate him and make you love him. In that sense he's a little like his character, Stan Ross. Here's hoping that in the future Mac will find more interesting material with which to rouse his own 'better gods.'"

Michael Elliott (Movie Parables) takes issue with the "muddled" writing but is similarly impressed by Mac's performance. He writes, "Not only is Bernie Mac a very funny man, he is able to do something few actors can do. He is somehow able to play an arrogant and obnoxious character without losing any of his 'likeability.' Even when he is being rude or full of himself, we can't help but root for him anyway. He lets us see Stan's vulnerability that exists beneath and behind the showmanship."

David DiCerto (Catholic News Service) complains that co-stars Angela Bassett and Paul Sorvino are wasted in their thankless roles, as the token girlfriend and a baseball manager respectively, but he says Mac acquits himself well: "While it is hardly a grand-slam performance, he takes his swings with authority and doesn't strike out. … Mac's comedic charisma softens the character's more abrasive edges and succeeds in making even a self-absorbed braggart likable. Mac also provides many of the film's genuine laughs. Unfortunately much of the picture's humor is of the vulgar and sexually suggestive variety, which is unwelcome in a PG-13 movie."

Brett Willis (Christian Spotlight) notes that the film has a moral message at the end, but he is upset by the language and the casual sex: "What a strange culture we've become when family-oriented, stand-up-and-cheer movies are made as strong PG-13s that you might not want to take the family to."

Mainstream critics generally don't care for the movie, though they have good things to say about its star.

1 of 4
The arrogant Stan (Bernie Mac) takes a ball back from a young fanStan tries to get back in shape with the help of Boca (Michael Rispoli) and Eddie (Scott Brooks)Stan meets T-Rex (Brian White), a younger version of himselfThe always-wonderful Angela Bassett as Mo