Ice Cube plays a stereotypical thug in the lead role

Gibbons finds his man in prison. Darius Stone (Ice Cube) has been languishing in a cell for nine years, having been betrayed and railroaded by political chicanery. He's not in a patriotic mood, but the chance to get out of prison, shoot guns and create mayhem is too much to resist.

In the tradition of the Bond girls, the women in this film are three dimensional, and two of those dimensions are silicon-enhanced. Charley Mayweather (Sunny Mabrey) is a femme fatale, the hot babe who may or may not be the enemy. Lola (Nona Gaye) is a carjacker with a heart of gold. The rest are eye-candy, strutting about in skimpy costumes and wearing sultry looks. They wear spike heels and short skirts. They rarely get to talk. 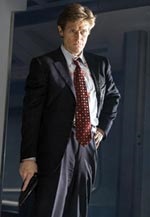 Among XXX's memorable contributions to the action genre is a tank battle on the hangar deck of an aircraft carrier—a sister ship of the one I served on in Vietnam. But where we were prohibited from smoking on deck (lest we ignite the fuel and ordnance), Ice Cube's Darius uses a battle tank to wipe out his adversaries, with no apparent ill effects to the ship. Guns blaze, rockets fly, and Darius is able to maneuver his tank with incredible grace, dodging rockets by sheer force of his excellent driving skills.

The retired USS Hornet stands in for a modern nuclear flattop, which appears to be anchored somewhere in the Potomac River, ready to mount an assault on the Capitol. It seems a bit of a stretch that such a gargantuan ship could navigate the Potomac. Somebody might notice such a non-stealth battle plan, but then again, this is an action movie. 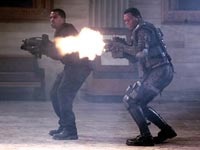 Director Lee Tamahori is no stranger to the action genre, having directed the Bond film, Die Another Day. The New Zealander's first feature was the hard-edged Once Were Warriors, which dealt with marginalized urban Maori. Once Were Warriors was a film with a deep social conscience and truly compelling characters. Then Tamahori moved to Hollywood. He's making a lot more money these days, but his promise as a director of meaningful films has taken a dive. That said, he propels the action along at a breakneck pace, jumping from one explosion to the next with reckless abandon. Guns blaze and the Capitol building gets trashed.

Given that the main audience for gangsta rap is suburban white teenagers, the ghetto/gangster approach may draw large mainstream audiences. The problem with this cheap substitution for fully developed characters is that the suburban wannabes will continue to believe that to be black is to be outside the law. 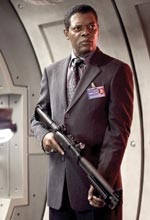 What was Samuel L. Jackson thinking when he signed on for this stinker?

Second, this action-packed sequel doesn't just defy plausibility … it may actually hurt your brain with its lunacy.

And third, critics are wincing when they see such formidable actors as Samuel L. Jackson and Willem Dafoe wasted on such material.

David DiCerto (Catholic News Service) calls it "odiously overwrought. It is a pity that director Lee Tamahori, whose career started off so promisingly with his brutal but emotionally riveting debut film, Once Were Warriors, should find himself enmeshed in such smash-and-crash fare. Though packed with slickly edited, if utterly ridiculous, action sequences, the testosterone-revved but plot-deficient sequel is twice as violent, twice as tedious and twice as pointless as the original."

Michael Elliott (Movie Parables) says, "This film is for people who like their movies explosive, loud and dumb."

Mainstream critics agree. One wrote, "This flashy atrocity, clearly a lost cause from the first five minutes, offers viewers no option but to assume crash position and brace themselves for the worst."

1 of 4
Ice Cube plays a stereotypical thug in the lead roleWillem Dafoe plays the renegade Secretary of StateMuch of the film plays out like the 'Grand Theft Auto' video gameWhat was Samuel L. Jackson thinking when he signed on for this stinker?