Saint Ralph opens in a confession booth, and the litany of adolescent sins confessed tells us succinctly—and humorously—that 14-year-old Catholic schoolboy Ralph Walker (newcomer Adam Butcher) is certainly no saint. But by the time the hapless Ralph has discovered that his confessor is not a priest but rather his fellow students enjoying a laugh at his expense, the audience has already learned to like the awkwardly earnest young man.

Ralph is infamously prone to wander (a scene of accidental arousal in a public swimming pool will be funny to some viewers, objectionable to others), and for the first twenty minutes the movie is perhaps a little too eager to show us the various ways Ralph stumbles into "self-abuse." But if Ralph's body has a mind of its own, his heart is good—yet also burdened. Ralph's father is dead, and his mother Emma (Shauna MacDonald) is gravely ill. When he's not at school or his mother's bedside, Ralph is alone in his parents' house, keenly aware of his odds of becoming an orphan … and already living like one.

Meanwhile, Ralph is a thorn in the side of Father Fitzpatrick (acclaimed Canadian actor Gordon Pinsent), who is the archetypal stern headmaster and priest. After learning of the "Old Testament depravity" of the pool incident, Father Fitzpatrick threatens expulsion and sentences Ralph to daily 6 a.m. Mass and, as an outlet for the boy's "energies," a stint on the cross-country running team. The moment Ralph saunters up to his first practice, extinguishing a cigarette on the way, both the boy and the film take on a new energy and focus. 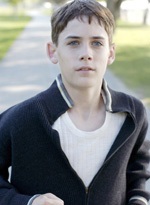