ApologetiX frontman J. Jackson admits his band's parodies may be a low form of art, but it's bringing people closer to God and helping them dig into their Bibles.
Maryann B. Hunsberger|February 14, 2005

When J. Jackson became a Christian in 1988, he thought he'd never listen to secular music again. He gave up playing in bar bands and pursued a career in journalism. Little did he know that he'd become the lead singer and songwriter for ApologetiX, a Christian band that parodies rock hits from the 1950s to the present day. ApologetiX has been featured on Christian shows such as "The 700 Club" and secular programs like "The Dr. Demento Show" and even Howard Stern's radio show. Their latest endeavor, a double-disc compilation called New and Used Hits, reached No. 1 on the American Christian Music Exchange's Modern/Alternative Album chart. Frontman J. Jackson spoke with us about the band, their music, and their vision. 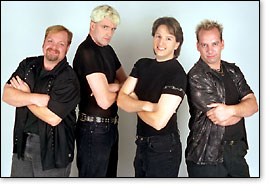 How did a full-time writer with a journalism degree form a parody band?

J. Jackson I wrote parodies all my life, and I used to sing in bar bands and garage bands. When I became a Christian, I totally turned my back on music, figuring I was done with it. I got rid of about 2,000 records, CDs and tapes. Instead, I immersed myself in the Bible, reading it from cover to cover, over and over. Then, I felt God giving me a clear indication to get involved in music.

I met Karl (Messner, lead guitarist and producer) in 1990. He was a much better guitarist than I am and we played our first ApologetiX concert in 1992. In 1994, we made a conscious decision to include modern rock to reach youth.

Why did you first parody classic rock songs?

Jackson I'd been a singer all my life. I was learning to play guitar when I became a born-again Christian. When I picked up the guitar after getting saved, it was like God had increased my spider powers (laughing). I could play and sing a lot better.

I started figuring out the licks from some of the old songs I used to like, but I didn't feel right singing the words. I was learning incredible stuff in the Bible, and I wanted a way to help me remember things like the names of all the Apostles, the books of the Bible in order, Scripture verses and stories. So, I started writing the parodies to teach myself the Bible and the guitar.

Is parody really an art?

Jackson Art takes many forms to suit many tastes. I don't know many people who like both Norman Rockwell and Pablo Picasso or Rembrandt and Andy Warhol. Some people like parody and some don't.

We've found that parody is an excellent medium for teaching the gospel and reaching the lost. Jesus called his disciples to be fishers of men. We just use familiar tunes and humor as the bait. Humor disarms people and allows you to hit them with a serious message afterward. Mary Poppins said it best, "A spoonful of sugar helps the medicine go down."

Do parodies have replay value?

Jackson If it weren't for the fact that it's the Word of God, I'd ask that too. But, we don't just do comedy. It's more like Christian story telling with a lot of humor. I used to cover lots of songs in bar bands. It got so old. But, singing about God's Word is different. We've seen a ton of people get saved and start reading their Bibles. God has allowed this to be used.

Jackson Like Paul's, our message—the gospel—is the same in all of our songs, no matter what the genre. All we are doing is translating it into a language which our audience understands. Some people translate the Bible into foreign languages to reach others; we translate it into the language of music. The founder of the Salvation Army, William Booth, took modern-day songs and set them to Christian lyrics. The idea is an old one.

Your new CD, New and Used Hits, parodies songs from 1957 to 2004. Did you record it with different generations in mind?

Jackson Absolutely. Rock has been around for 50 years, and different generations like different rock songs. We wanted baby boomers, youth and everyone in between to have rock songs they related to. God trained Saul of Tarsus as a Pharisee and as a Roman citizen—and he ministered to the Greeks, Romans and the Jews. We became trained in different music to minister to different people.

You sound different on every song. How did you learn to do such great vocal impersonations?

Jackson God gives us all different gifts, and he's apparently given me a gift for mimicry in song. People who draw say they just draw what they see. It's the same way with singing. I just sing what I hear in my head. The guys in our band sat in their basements as kids and pretended to be singers. We envisioned ourselves on stage and imagined that we were that person. That goes a long way. You have to be that kind of person to do this. Years of training from being a choir boy to singing rock and roll in bar bands also helps.

What helps you decide which songs to do? Is it the ability to fit a lyric or is it a matter of being able to mimic the original artist?

Jackson Sometimes, you have a theme and are looking for a popular song with words that rhyme with that topic. More often, we try to pick songs that are very popular, so people will recognize them. Our favorite thing to do is find a song that was a hit twice. "Mony Money" was a hit for Tommy James in the '60s and for Billy Idol in the '80s. Two or three generations know songs like that. The third way is that God just puts an idea into my head. We have a song, "Love the Jews," that is a parody of "Love Me Do." It just popped into my head one day. It was a total gift from God.

Do apologetics experts look over your lyrics before you publish them?

Jackson We do consult on certain doctrinal issues to make sure that we're not going beyond what's written. I've always been involved in counter-cult ministries and want to give Christians a way to know what they believe and why they believe it, so when someone from a cult comes to their door taking a verse out of context, they will know how to answer them.

They can even sing it to them (laughing)!

Jackson Exactly! We focus on the essentials of the faith and try to interest people in reading the Bible. We want to reach the lost and teach the rest. I haven't missed a day of reading the Bible in 17 years, and I've read it through at least 20 times. I want other Christians to do that.

Have you ever considered parodying Christian artists?

Jackson Mark Lowry does that already (laughing). No, we have steered clear of Christian bands and bands that walk the line between sacred and secular, such as U2, Lighthouse, Creed or Collective Soul.

Do Christians recognize the mainstream songs you cover?

Jackson Yes. Kids hear secular music. They hear Kidz Bop CDs, where children sing popular songs but don't change the words. Some of the songs are raunchy and little kids are singing them. Kids recognize right away that we have changed the words.

Is there the side effect of turning these kids on to groups like AC/DC, Eminem and Nirvana because ApologetiX covered them?

Jackson We don't see that. It's a much more natural progression to go in the other direction. People come around to the Word of God.

Do you get much criticism of your parodies?

Jackson We've had a 99 percent positive response to our music from both Christians and non-Christians, including pastors, church leaders, teachers and missionaries. If what we were doing didn't sit well with the pastors, church leaders, teachers and missionaries, I'd have to take a harder look at what we do. We do get three types of criticism, though. The first is from Christians who hate rock music and think it's of the devil. The second is from kids who can't believe we touched their favorite song. The third is from artsy Christians who feel we've violated their standards of artistic integrity.

What kind of response do you get from unbelievers? Do they appreciate the scriptural humor?

Jackson We play at secular events such as NBA games and get a great response. Even if unbelievers don't agree with the message, they appreciate the humor, the talent, and seeing Christians who don't fit into their stereotypical mold.

A few years ago, we did a parody of Papa Roach's "Last Resort" called "Life Restored." The original advocated suicide, while ours advocates eternal life. A girl we met recently came to a concert because her boss, a Christian who is a fan, brought his whole staff. That night, we opened with "Life Restored." She gave her life to Christ and e-mailed us to say the Papa Roach parody did it for her. She said she had contemplated suicide while listening to the original Papa Roach song.

We also covered "Come As You Are," by Nirvana, whose lead singer, Kurt Cobain, committed suicide. We redid it as "Young as You Are," which stresses not committing suicide and accepting Christ. We got a call from a DJ in Australia saying a listener was ready to commit suicide, but she heard this song and called him instead. He went off the air and led her to Christ. The same thing happened with a guy who is now studying for the ministry.

Parody may be the lowest form of art, but God uses the foolish things of this world to confound the wise.

For more about ApologetiX and their ministry, visit their official site. Our review of the band's hits compilation can be found by clicking here. Visit Christianbook.com to listen to sound clips and buy their music